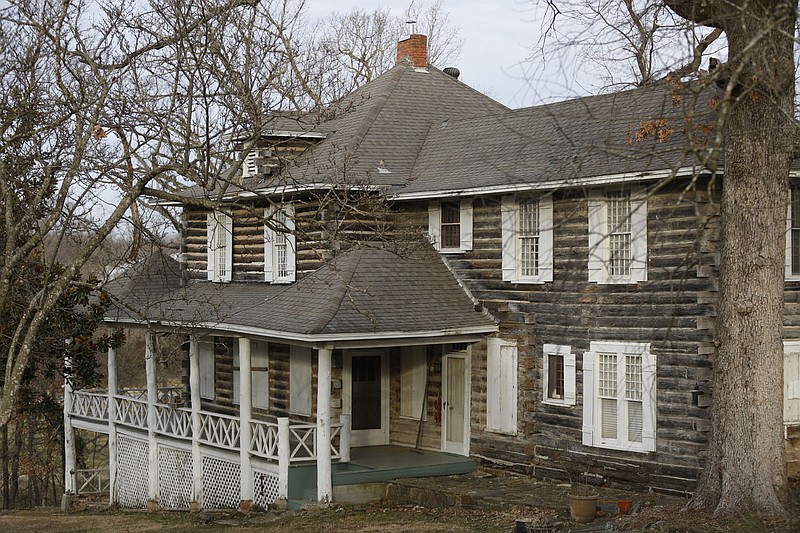 Rabbit Foot Lodge is on the north end of J.B. Hunt Park in Springdale. The lodge was built in 1908-09 and placed on the National Register of Historic Places by the U.S. Department of the Interior in 1986. Go to nwaonline.com/210404Daily/ and nwadg.com/photos for a photo gallery. (NWA Democrat-Gazette/David Gottschalk)

The city will make a one-time payment of $25,600 to the Northwest Arkansas Land Trust, which will hold the 31 acres into perpetuity, preventing development that might harm the site, said city attorney Ernest Cate.

The agreement also will allow the city to improve the property for public use.

Chad Wolf, director of the Parks and Recreation Department, said the city hopes to build trails to connect the property to the Razorback Greenway, some bathrooms and pavilions. The city also has plans to add another 18 holes to the disc golf course in J.B. Hunt Park.

A similar agreement with the Arkansas Historic Preservation Program protects the lodge.

Rabbit Foot Lodge overlooks Silent Grove Road from Hunt Park. Future-Sen. J. William Fulbright bought the Adirondack-style log house in 1934 and lived there with his family while he was president of the University of Arkansas from 1939 to 1941.

Maintenance of the spring on the property also is a strong concern of the city. Fulbright dammed the spring to create a swimming hole for his family.

Karen Compton, the most recent resident of the property, said Tuesday she recently visited her old home.

"I could not believe how good it looked," she said.

She especially noted the replacement of logs and acid washing of the rest, which was done during the first phase of restoration. The project also replaced the roof, soffit and rotted logs holding it.

The City Council voted in its last meeting July 13 to approve phase two, which would restore the wide wrap-around porch and the logs that support it. Compton noted she and her family replaced those two-story posts in 1983.

The council approved $553,000 for this second phase. Phase one was completed with $411,759, said Wyman Morgan, the city's director of administration and finance.

Compton sold the lodge and the acreage to the city in 2015 for $1.05 million. The purchase came with an agreement the city would maintain it in good condition indoors and out. Compton went before the council previously to remind it of the promise because she wasn't satisfied with the pace of the city's restoration.

"I'm real proud how the city is moving on it now," Compton said. "I'm hoping they will find a great renter who will let the public inside to see and walk through."

The city's ultimate goal is for the public to be able to use it, said Mayor Doug Sprouse.

The lodge is listed on the National Register of Historic Places, through the efforts of Compton.

Johnelle Hunt donated $500,000 to the city to buy the lodge and surrounding land. The property was appraised at $1.1 million at the time.

Hunt is the widow of J.B. Hunt, who established the successful trucking company that bears his name. The Hunts owned the land that has become the park.

Dr. and Mrs. Charles F. Perkins built Rabbit Foot Lodge as their home in 1908, with all materials coming from the property. Perkins was Springdale's first surgeon.

Fulbright added several expansions and improvements to the house.