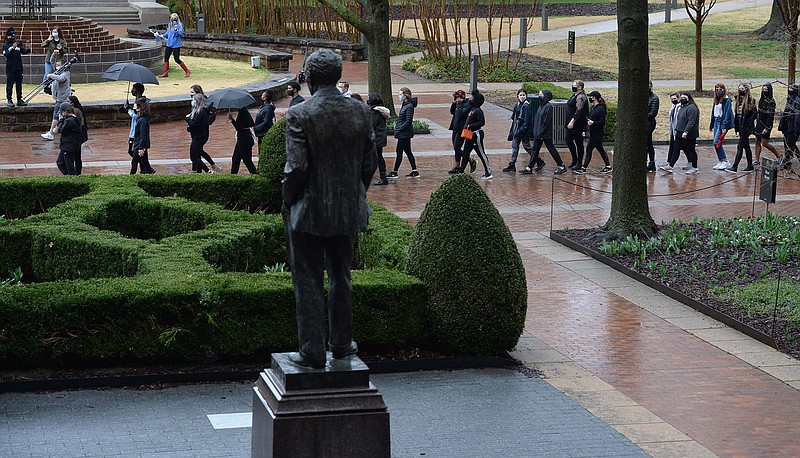 A large group of University of Arkansas students and members of the campus community march Saturday, March 13, 2021, past a statue of J. William Fulbright near Old Main during a rally on the university campus in Fayetteville. (NWA Democrat-Gazette/Andy Shupe)

The University of Arkansas Board of Trustees this morning approved a resolution that will keep a statue of former U.S. Sen. J. William Fulbright in its current location on the Fayetteville campus but add context to the site to present Fulbright's "complex legacy."

No timeline was given for when changes to the site would take place.

University of Arkansas System President Donald Bobbitt had recommended to trustees approval of the resolution, which comes after about a yearlong process to reconsider Fulbright's legacy given his opposition to racial integration and voting record on civil rights in the 1950s and 1960s.

The resolution also affirms the use of the Fulbright name for UA's arts and sciences college.

The language in the resolution refers to a new state law, Act 1003, that prohibits the removal or relocation of a public monument without a waiver from the Arkansas History Commission. But neither Bobbitt nor board members brought up the state law in discussion this morning about the resolution.

The resolution states, in part, that the board "acknowledges the passage of Act 1003, which prohibits the removal or relocation of monuments on public property, and directs that the J. William Fulbright statue remain in its current location and that the University add contextualization to the statue that affirms the University's commitment to racial equality and acknowledges Senator Fulbright's complex legacy, including his record on international affairs, Civil Rights legislation, and racial integration."

The board, which met in Little Rock and virtually, approved the resolution without any audible opposition.

Fulbright is perhaps best known for introducing legislation in 1945 that created the international educational exchange program named after him.

Black student leaders critical of Fulbright last year called for the removal of the Fulbright statue and his name from UA's arts and sciences college, doing so as part of the wider #BlackAtUark social media effort highlighting racism and inequity experienced on campus.

A committee of students, faculty, staff members and alumni began meeting in August to formally review Fulbright, and the group in April voted to recommend removal of the statue from campus and also that the Fulbright name be removed from the university's arts and sciences college.

Joe Steinmetz, at the time UA's top administrator, in May wrote a letter to Bobbitt that went against the committee's recommendations, instead calling for the college to keep the Fulbright name. Steinmetz recommended that the Fulbright statue be moved from the rear courtyard of the Old Main academic building to a new campus location, and also that context be added to the site about Fulbright.

This morning, in the same vote to approve the Fulbright resolution, the trustees board also approved without any audible opposition a separate resolution to remove the name of former Arkansas Gov. Charles Brough from a UA campus dining hall.

The UA campus committee concluded that Brough "blamed Black people for the violence, and empowered those who oversaw the unjust judicial process that sent scores of Black men to prison and condemned twelve men to death."

The Brough resolution states that the dining hall name goes back to 1958.

The Fulbright College name goes back to 1981, while the bronze Fulbright statue was dedicated in 2002. Fulbright died in 1995.