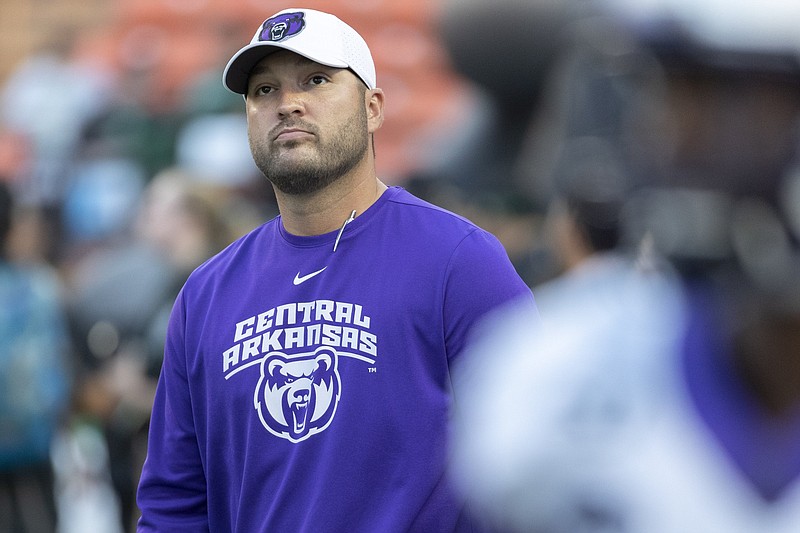 In this file photo UCA head coach Nathan Brown looks up at the stands as he walks onto the field before an NCAA college football game against Hawaii, Saturday, Sept. 21, 2019, in Honolulu. (AP Photo/Eugene Tanner)

When the Atlantic Sun Conference held its inaugural football media day Wednesday morning, there were five programs participating in the Zoom call.

Except two of those five won't be playing in the league this year.

Kennesaw State and North Alabama are staying in the Big South for another season, and the other three programs will represent less than half of the league they're playing in this fall.

It's all part of the evolving process that is the formation of a Football Championship Subdivision conference, something the ASUN expects to occur by this time next year.

But this fall, the University of Central Arkansas, Jacksonville State and Eastern Kentucky will be part of the ASUN-WAC Challenge. The Bears' new conference is partnering with the Western Athletic Conference's four football-playing members for one year.

Matching up with a group that includes reigning FCS champion Sam Houston State, Central Arkansas knows there's an opportunity to showcase the ASUN's strength this fall.

"We're looking to win year in and year out wherever we're at, but to be attractive to other programs, you want the conference to have a high RPI and put several teams in the national playoffs," UCA Coach Nathan Brown said Wednesday. "That's what's going to be attractive to other football-playing universities. It's not going to take long when you see some of these programs and the history they have."

As much as the Bears want to win, it's also expected of them. The coaches of the seven ASUN-WAC Challenge teams -- which also include Abilene Christian, Lamar and Stephen F. Austin -- picked UCA to finish second behind Sam Houston State.

The two other ASUN programs in the challenge each have rich football traditions. Eastern Kentucky made four consecutive FCS title games from 1979-82, winning twice. Jacksonville State has reached the playoffs in seven of the past eight seasons with a national runner-up finish in 2015.

Add in Kennesaw State, which went 11-3 two years ago, and that's a core that will give the ASUN a chance to be one of the better FCS leagues from the get-go, something ASUN Commissioner Ted Gumbart has repeatedly emphasized as a goal.

The question of who joins the fray remains.

Currently, the ASUN has 12 teams. Gumbart explained that they'll play in a divisional format for most sports, but that isn't likely to be the case with football for a while.

Liberty is going to remain a Football Bowl Subdivision independent team, and Stetson will stay as a non-scholarship football program. None of the league's other schools have plans to add football, so the ASUN will need to add teams from the outside -- either as full members or just for football.

Gumbart said he could envision the ASUN growing to as many as 18 teams, with the goal of building a football conference with at least eight schools. He declined to comment on any discussions with potential members.

"We are confident that we are going to grow," Gumbart said. "If the environment changes -- which it obviously is -- you need to have a 3-to-5-year plan that's flexible enough to accommodate different wishes."

Some of that change could be a result of realignment at the FBS level. If dominoes trickle down, from Texas and Oklahoma's move to the SEC as expected, that could free up programs to join the ASUN and be part of the league's future.

Those moves could take time, and it's not something the ASUN has a ton of at the moment. Gumbart made clear that he hopes to have more than five members next fall.

If the ASUN doesn't, it won't lose its automatic qualifier spot into the FCS tournament as gaining one this season through the ASUN-WAC Challenge gives the conference a two-year waiver.

Nonetheless, UCA still expects this year to be one in which it can begin to establish new rivalries while also facing off against several former Southland foes.

The Bears played Eastern Kentucky twice last fall -- splitting the matchups with a win in Conway -- but those are the only two matchups ever between the teams. They've never met Jacksonville State.

"It should be fun to have some new competition," UCA defensive back Cameron Godfrey said. "We try to dominate the conference every time we can, so we're going to do the same thing."

Brown is already confident in what his program's new league has to offer.

"All it would do is take a head coach at a university to call me and let me sell the ASUN to them," Brown said. "I promise we'll get some programs in this and have one of the best conferences in the country because I think this is a special conference that has its brightest days ahead."