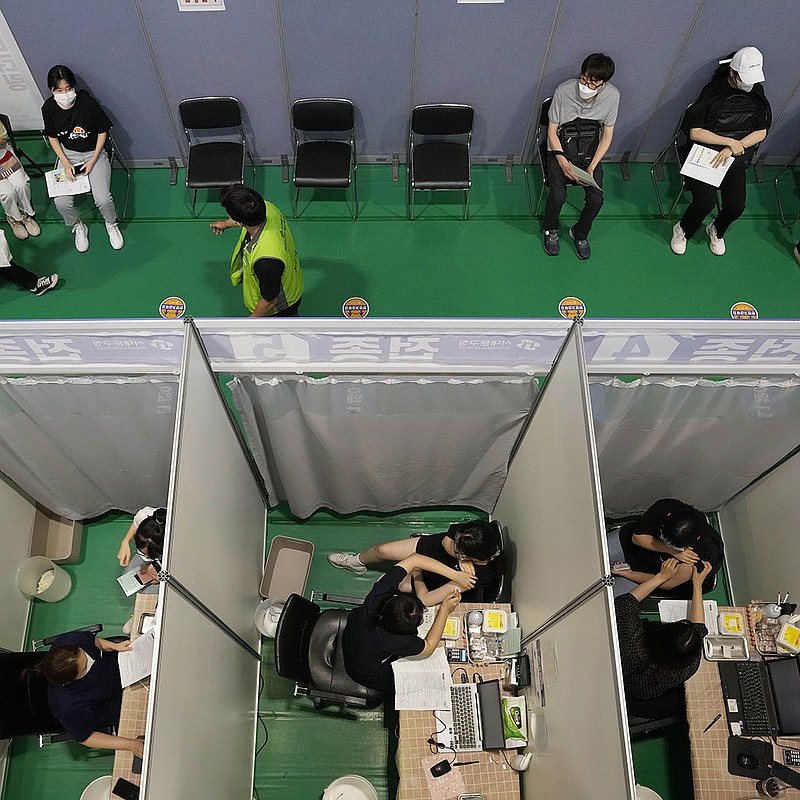 People receive a first dose of the Pfizer covid-19 vaccine Wednesday at a vaccination center in Seoul, South Korea. Officials reported a new daily high for coronavirus cases, a day after authorities enforced stringent restrictions in areas outside the capital. (AP/Ahn Young-joon)

New guidance from the federal government set off a cascade of mask rules across the nation Wednesday as cities, states, schools and businesses raced to restore mandates and others pushed back against the guidelines at a time when Americans are exhausted and confused over constantly shifting pandemic measures.

Nevada and Kansas City, Mo., were among the places that moved swiftly to reimpose indoor mask requirements after Tuesday's announcement from the Centers for Disease Control and Prevention. But governors in Arizona, Pennsylvania and South Carolina said they would resist reversing course.

The federal recommendations quickly plunged Americans into another debate over the face coverings meant to curb easy transmission of the deadly coronavirus.

In Florida, a Broward County School Board meeting devolved into a screaming match between irate parents and board members Tuesday. Some protesters even took to burning masks outside the building.

In suburban Atlanta, Jamie Reinhold said she would pull her kids from school if the district stuck to the CDC's guidance, which the 52-year-old believes takes the country "backward" and damages confidence in the vaccines.

"If you believe in the masks, go ahead, but don't try to tell me what to do for my child's health and safety and immune system," she said. "It's my child. It's my choice."

And in New Orleans, Lisa Beaudean said she was not convinced that mask mandates would inspire the unvaccinated -- who account for most new infections -- to take the virus seriously and get inoculated.

"I'm very frustrated," she said as she strolled the French Quarter without a mask. "For the last 18 months, I've done everything I'm supposed to do, and there are no repercussions for those who haven't done what they're supposed to do."

Google postponed a planned Sept. 1 return to the office for most of its more than 130,000 employees until mid-October, following a similar move by Apple. Google said Wednesday that it will also eventually require everyone on staff to be vaccinated, a mandate that President Joe Biden said he's also weighing for federal employees.

[Video not showing up above? Click here to watch » https://www.youtube.com/watch?v=jHjiG0BC5qE]

Other government leaders, meanwhile, said they will hold off reinstating mask rules for now.

Pennsylvania Gov. Tom Wolf said he's not considering imposing a mask mandate in schools or statewide, arguing that such orders were necessary before there was a vaccine.

"People have the ability to make the decision to get a vaccine," the Democrat told a Pittsburgh radio station Tuesday. "If they do, that's the protection."

The CDC's new guidance applies to places with at least 50 new cases per 100,000 people in the past week, which is roughly 60% of all U.S. counties, federal officials said. Nearly all of the South and Southwest is subject to the guidance, but most communities in the Northeast -- with the exception of major metropolitan areas like New York City and Boston -- are exempt for now, according to the CDC's covid tracker.

The CDC's updated guidance was prompted by new data suggesting vaccinated people can pass on the virus in rare cases.

But the agency's director, Rochelle Walensky, stressed that the vaccines are working by preventing greater levels of hospitalization and death. Unvaccinated people account for the vast number of new infections. Two-thirds of the vaccine-eligible population in the U.S. has received at least one dose.

"I know this is not a message America wants to hear," Walensky told CNN on Wednesday. "With prior variants, when people had these rare breakthrough infections, we didn't see the capacity of them to spread the virus to others, but with the delta variant, we now see that you can actually now pass it to somebody else."

Nevada reinstalled a statewide mask mandate within hours of the CDC's Tuesday announcement, requiring that face coverings be worn indoors in public in counties with "substantial or high transmission" starting Friday. Twelve of Nevada's 17 counties fit that criteria, the state said.

That includes Clark County, home to Las Vegas, where the renewed mandate has raised questions about how it will affect its tourism industry, which had been on what was seen as an upward trajectory toward recovery from the pandemic.

"Let's mask up to keep one another safe," tweeted Nevada Gov. Steve Sisolak.

The mandate in Nevada drew confusion and frustration on social media, with questions about what the sudden changes meant for businesses like nightclubs. It also left some tourists less excited about coming trips to Las Vegas, leading some to cancel their plans.

Amy Boike of Lakeville, Minn., had been planning to travel to Las Vegas at the end of August for a concert, but said she would cancel her trip if she could get a refund for her tickets to the show, as her airfare and hotel were refundable.

"I don't want to wear a mask the whole time I am there," she said in a text message. "I don't want to spend all that money for a trip and then have to suffer through a mask."

Boike, 44, said she is fully vaccinated and that it is "beyond frustrating" that the Nevada mandate includes vaccinated people.

"What's the point of the vaccine if we still have to wear a mask?" she asked.

Medical experts point to the effectiveness of the vaccines in preventing severe illness or death from covid-19.

The Nevada Gaming Control Board reinforced the new mandate, telling casinos and other businesses it issues licenses to in a notice that it would "continue to ensure that best practices are used in the mitigation of covid-19."

New York will require state employees to get vaccinated against the coronavirus by Labor Day or undergo weekly tests for covid-19, Gov. Andrew Cuomo said Wednesday.

"It's smart, it's fair and it's in everyone's interest," Cuomo said in a Zoom call with the nonprofit Association for a Better New York.

In mandating either the shots or frequent testing for government workers, Cuomo is following on the heels of California and New York City, which announced similar policies for employees earlier this week. The governor called on local governments across New York to follow suit.

New York, like other states, has seen a rising number of coronavirus cases linked to the delta variant. New infections have climbed 150%, and hospitalizations have jumped 69% over the past two weeks.

"What we're seeing is a pandemic among those unvaccinated people, but it affects everyone," Cuomo said.

Cuomo said covid-19 vaccines would be mandatory for "patient-facing" workers at state-owned hospitals and veterans homes. Those employees would not be able to avoid inoculations by undergoing weekly virus testing.

The Cuomo administration said about 130,000 state employees would be affected. Cuomo's office did not immediately respond to questions about who will pay for testing for unvaccinated workers and potential penalties for unwilling workers.

The Democrat said his administration still needed to speak with union officials about how to implement the policy.

St. Louis County's top elected official insisted Wednesday that a mask mandate remained in place even though the county commission voted to overturn it.

"This virus, these cases and this curve is shooting straight up, and if we don't make some decisions fast we are going to be in a bad spot," St. Louis County Executive Sam Page said during a media briefing.

Page spoke after the St. Louis County Council voted 5-2 on Tuesday to end the county's mask mandate, saying Page did not consult with council members before issuing it. Orders took effect Monday there and in the city of St. Louis, requiring everyone age 5 or older to wear masks inside public spaces and on public transportation even if they are vaccinated.

Health officials in the county said in a news release that they had documented more than 600 breakthrough cases in which vaccinated people tested positive for covid-19, and they stressed that the total is likely higher.

In addition to the mandate, St. Louis Mayor Tishaura Jones said her administration was evaluating whether to require city workers to get vaccinated.

The mandates in the St. Louis area prompted Missouri Attorney General Eric Schmitt to immediately file a lawsuit to stop them. Page said that until the lawsuit was resolved, "masks will be required in all indoor public spaces."

Meanwhile, Kansas City Mayor Quinton Lucas said Wednesday that he will reinstate an indoor mask mandate similar to the one in the St. Louis area. It will take effect Monday and last through at least Aug. 28. Lucas said that because of the litigation in the St. Louis area over masking, he also would introduce a City Council resolution.

Just two days earlier, on CBS' "Face the Nation," Lucas said that "at this point" mask mandates were unnecessary. In announcing the new mandate, Lucas said he would "provide further details in the morning."

Schmitt, who is seeking the Republican nomination for U.S. Senate, vowed in a tweet to sue, saying he thinks the mandate is "about politics & control, not science."

Lucas fired back, tweeting, "What are you suing about? Do you want us to just schedule a debate on Fox News so you can get the press? I'm down!"

The apprehension was evident Tuesday at the White House. Press secretary Jen Psaki spent much of her daily briefing jousting with reporters over the new CDC guidance.

Since May, virtually all White House staff members and reporters at the complex had gone without face coverings. But Tuesday, even before the CDC formally announced its new recommendations, a handful of reporters and photographers donned masks at Psaki's briefing.

Vice President Kamala Harris put one on during a meeting with American Indian leaders, and reporters accompanying her were abruptly instructed to wear masks by press aides, who said the level of virus transmission in Washington had been upgraded by the CDC to "substantial."

White House staffers received an email directing them to wear masks while indoors at the White House even if they're fully vaccinated. The White House Correspondents' Association sent a similar message to the hundreds of journalists credentialed to be in the complex.

And Congress' doctor Tuesday night reimposed a mask-wearing requirement for lawmakers and all others while they are on the House floor, and in hallways and offices.

After months of resisting vaccine mandates, Biden told reporters earlier Tuesday that he was considering forcing federal employees to get shots. While there have been so-called breakthrough cases among the vaccinated, Biden said the delta variant is primarily circulating among those who aren't inoculated.

"If you're not vaccinated, you're not nearly as smart as I thought you were," Biden said during a visit Tuesday to the headquarters of the Director of National Intelligence in Virginia.

Republicans, many of whom have only recently begun to urge their constituents to get vaccinated, have indicated they don't plan to offer Biden help in getting them to follow the CDC's suddenly stricter mask guidance.

Former President Donald Trump, in a statement Tuesday night, belittled the new concerns: "We won't go back. We won't mask our children." 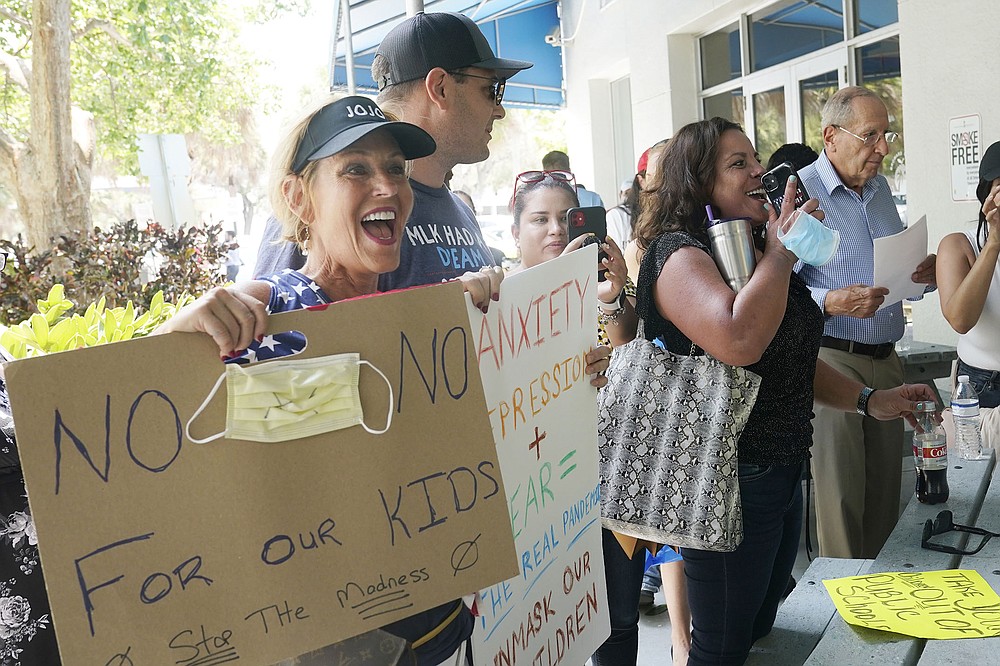 Joann Marcus (left) cheers Wednesday at an emergency meeting of the Broward School Board in Fort Lauderdale, Fla. A small but vocal group spoke vehemently against masks, saying their personal rights were being eroded and their children were suffering socially. Some protesters burned masks outside the building. (AP/Marta Lavandier)