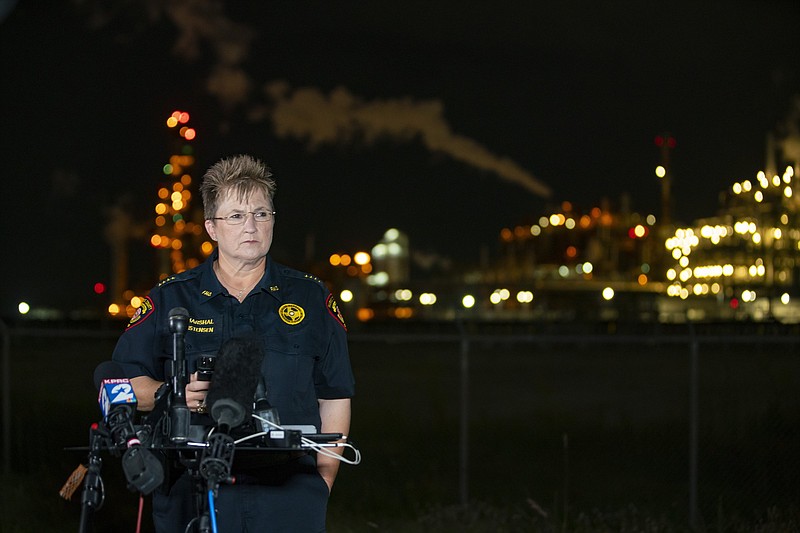 Harris County Fire Marshal Laurie Christensen said Tuesday in La Porte, Texas, that some of the leaked chemicals can be toxic if inhaled. Video at arkansasonline.com/729texas/. (AP/Houston Chronicle/Mark Mulligan)

A leak at a chemical plant in Texas late Tuesday killed two people and injured dozens in what local authorities are describing as a "mass casualty incident."

The leak of acetic acid, a food preservative that is commonly used to make vinegar and can be flammable, occurred at 7:35 p.m. Tuesday at the LyondellBasell facility, which is the world's third-largest producer of the acid, according to the company.

The facility is part of the company's La Porte Complex, about 25 miles east of Houston, which also manufactures plastics and other chemicals used in paint, toys and food packaging.

The Harris County Fire Marshal's Office said early Wednesday that after investigators had conducted an initial review and found there was no explosion or fire, it had turned the investigation over to the Harris County Precinct 8 Constable's Office.

[Video not showing up above? Click here to watch » https://www.youtube.com/watch?v=3LBFrpvkhnI]

In a statement sent to The Washington Post on Wednesday, LyondellBasell said 30 potentially affected workers were taken to hospitals for evaluation and treatment, 24 of whom were later released. The constable's office said Wednesday that 42 people were affected by the incident, with injuries ranging from critical to minor. Chief Deputy Jason Finnen with the constable's office said some of the affected individuals were treated on-site.

Among the chemicals being used in the plant were hydrogen iodide and methyl acetate, Christensen told reporters, which could be toxic if inhaled and could cause severe burns.

The city of La Porte issued a statement saying the leak had "been isolated, and air monitoring at the facility perimeter indicates no off-site impact."

"Approximately 100,000 pounds of a mixture which includes acetic acid was released. Cleanup is continuing at this time," the company said. "Air monitoring conducted during the incident did not indicate actionable levels and monitoring is ongoing."

In an earlier statement, LyondellBasell spokeswoman Chevalier Gray said "all appropriate regulatory agencies have been notified."

LyondellBasell officials said emergency responders from La Porte and Channel Industries Mutual Aid were at the scene Tuesday night, and that all personnel working in the area of the La Porte Complex, where the leak occurred, had been accounted for.

The people who died have not yet been identified by the company or local authorities.

Harris County's County Judge Lina Hidalgo tweeted that she was "heartbroken" to learn of the deaths and said "county and other first responder agencies are working to support the other workers impacted and to verify that the incident is contained."

The constable's office said it is conducting an investigation, with cooperation from LyondellBasell, to determine the cause of the incident.