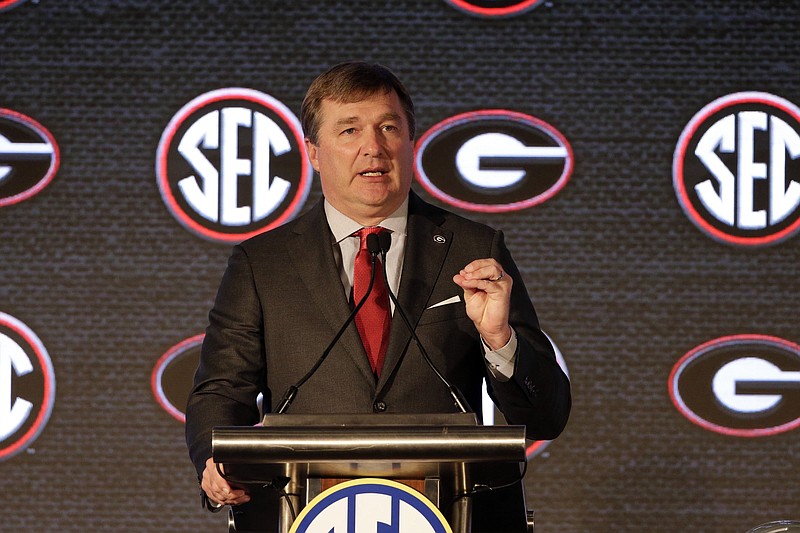 HOOVER, Ala. -- After conceding the SEC East crown to Florida last fall after a three-year reign atop the division, Georgia is expected to be back with a vengeance.

The Bulldogs have the makings of an offensive juggernaut with quarterback JT Daniels behind center, and enough key pieces and depth on defense to challenge for championships.

Sixth-year Coach Kirby Smart whipped out a quote from Henry David Thoreau during his extra-long opening remarks at SEC Media Days last week to sum up the expectations for the Bulldogs.

Suffice it to say, the expectations will be high for a program that lost to Alabama in overtime in the College Football Playoff championship game in Smart's second season in 2017.

Georgia was picked by league media to reclaim the SEC East this fall at media days.

The Bulldogs used three starters at quarterback -- D'Wan Mathis, Stetson Bennett and Daniels -- after would-be starter Jamie Newman opted out last summer. That's the most quarterback starters Georgia has used in a season in 15 years.

Second-year coordinator Todd Monken has plenty of weapons to mesh in the offensive game plan, and Daniels knows his job in the system.

Smart was asked whether Daniels had the arm talent to stretch the field like LSU's Joe Burrow and Alabama's Mac Jones, the last two CFP-winning quarterbacks.

"The two guys that were the last two years' national champions, they were really good quarterbacks. They were great decision-makers. They were actually better athletes than people give them credit for. The decision-making process, touchdown-to-interception ratio, protecting the ball, using your playmakers -- which both had really good playmakers around them -- JT has those skill sets.

"Coach Monken has that experience doing it in the NFL. With Tampa Bay, they led the league in passing. We have the recipe for those things."

Cook is part of a diverse running back crew that also features Zamir White, Kenny McIntosh and Kendall Milton. White ranked 10th in SEC rushing with 77.9 yards per game in 2020.

Pickens is likely to miss most of the season after knee surgery, but pass catchers with potential abound in Jermaine Burton, Kearis Jackson, Dominick Blaylock, Marcus Rosemy-Jacksaint and LSU transfer Arik Gilbert, who was granted immediate eligibility by the SEC.

"With Arik, any time you can get a skill player that can do things with the ball, you're always looking to be dynamic," Smart said. "You look at teams that have won the national championship recently, they're most dynamic on offense and at the skill positions."

The Bulldogs lost plenty on defense, including linebackers Monty Rice and Azeez Ojulari, and defensive backs Richard LeCounte III and Eric Stokes, but they have premier talent waiting to break out. Among the highly recruited defenders are linebacker Nolan Smith, the nation's No. 1 prospect in 2019 by the 247Sports composite rankings, and Kelee Ringo, the nation's top-rated cornerback in 2020.

The strength on defense is the front seven, where tackle Jordan Davis returned for his senior season after many thought he'd declare for the NFL Draft.

"I had to do a lot of thinking, but it was a relatively easy decision," Davis said. "I felt like I left a lot on the table. I wanted to make sure that I could improve as a player. Not only as a player, but as a person.

"I just wanted to savor the moment because I feel like I didn't really savor my last season or past seasons because I was so rushed."

Georgia has a strange schedule. After opening the season against Clemson in Charlotte, N.C., the Bulldogs play four consecutive games against nonconference teams and SEC opponents who finished well below .500 until taking on Auburn on the road. The Bulldogs have two Power 5 nonconference opponents away from home to bookend their schedule, with a road date vs. Georgia Tech wrapping up the slate.

With JT Daniels expected to provide stronger production at quarterback, a deep backfield, plenty of potential at wideout and tight end, a solid O-line and a loaded front seven on defense, the Bulldogs are expected to contend for the SEC title and a CFP berth. 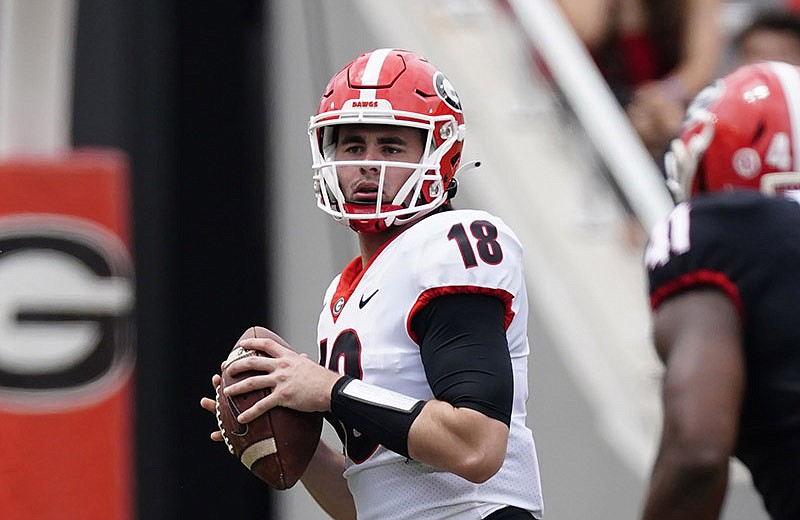 JT Daniels returns at quarterback for Georgia in 2021. “I’d say my biggest strength is understanding my role of being the primary distributor,” Daniels said. (AP/John Bazemore)