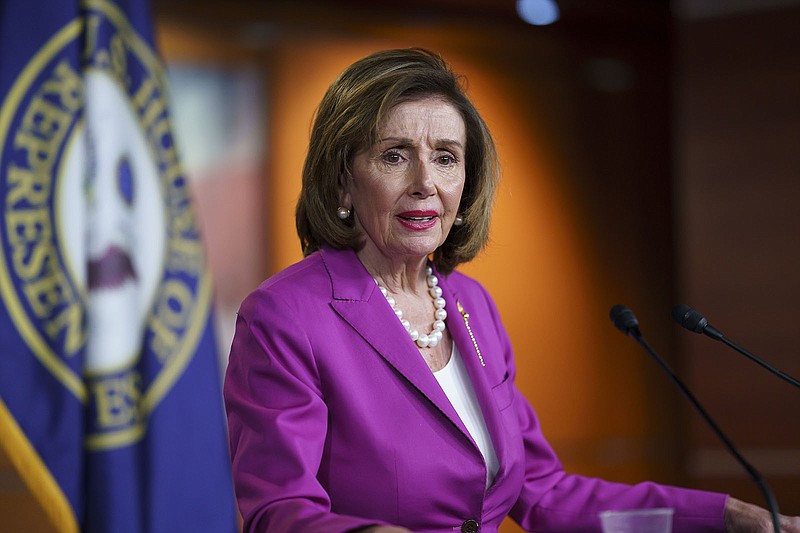 Speaker of the House Nancy Pelosi, D-Calif., talks to reporters at the Capitol in Washington, Wednesday, July 28, 2021, the day after the first hearing by her select committee on the Jan. 6 attack. (AP Photo/J. Scott Applewhite)

WASHINGTON -- House Republicans on Wednesday angrily criticized a new order from the Capitol Hill physician to wear masks inside the Capitol because of the spread of the delta variant of the coronavirus, leading Speaker Nancy Pelosi to call House Minority Leader Kevin McCarthy a "moron" over his argument that the decision was not based on science.

Many House Republicans refused to wear masks on the House floor during a series of morning votes, before they called for the chamber to adjourn as GOP members rebuffed attempts by staff members to get them to put on masks.

"This is some serious nanny state stuff that will only breed resentment. No kidding," Rep. Chip Roy, R-Texas, said on the floor, complaining that the House should be focusing on border security. He added: "This institution is a sham. We should adjourn and shut the place down."

When Rep. Lauren Boebert, R-Colo., entered the chamber, a Democratic staff member handed her a mask. Boebert grabbed it and dropped it on the floor, according to people familiar with the interaction who spoke on condition of anonymity because they were not authorized to speak on the record. The congresswoman's office said she slid it back across the table to the staffer.

Boebert is among the most outspoken Republicans against mask requirements, arguing that masks are a sign of authoritarianism rather than an attempt to prevent the spread of a disease that has killed more than 611,000 Americans.

"We might as well start calling this a Perma-demic," she tweeted Wednesday morning. "Permanent masking. Permanent state of emergency. Permanent control. This will go on until the American people just say enough is enough. The tyrants aren't giving this up!"

In a late evening email Tuesday sent to all offices in Congress, the Office of the Attending Physician Dr. Brian Monahan reinstituted the mask mandate in all House office buildings, meeting areas and the chamber to prevent the spread of the coronavirus among members and staffers.

While he suggested that "well-fitted, medical-grade filtration" masks be worn in the Senate, Monahan stressed the immediate requirement of use on the House side of the Capitol given the "collection of individuals traveling weekly from various risks." Masks, however, are not required when an individual is alone inside a room or outside.

Many Republicans have declined to say whether they have been vaccinated and represent areas with the biggest spikes in infections.

The order came after the Centers for Disease Control issued new recommendations for mask use Tuesday, urging all vaccinated and unvaccinated individuals to wear masks indoors if they live in areas with high spread of the delta variant.

[Video not showing up above? Click here to watch » https://www.youtube.com/watch?v=iYjqAsMPEeY]

Democrats shot back at Republican complaints, noting the Capitol physician was following the advice of public health officials.

McCarthy joined Republicans in deriding the new mask mandate despite concerns from public health officials that the delta variant poses a renewed threat to the public, particularly because of the refusal of many people in areas represented by Republicans to get vaccinated.

"Make no mistake -- the threat of bringing masks back is not a decision based on science, but a decision conjured up by liberal government officials who want to continue to live in a perpetual pandemic state," McCarthy tweeted shortly after Monahan sent his email Tuesday night.

Asked about McCarthy's comment by NBC News on Wednesday morning, Pelosi responded: "He's such a moron."

She declined to repeat that barbed criticism later at a news conference, but stood by her assessment of the minority leader's comments.

"To say that wearing a mask is not based on science, I think is not wise," she said. "And that was my comment. And that's all I'm going to say about that."

McCarthy said he wanted more answers from Pelosi about the guidance. "Well, she's so brilliant. Can she tell me where the science in the building changes between the House and the Senate," McCarthy said Wednesday, listing several other questions he had about the new CDC guidance. "So a lot of questions. If she knows so much science, explain to me where the science changes in the rotunda."

Roughly two dozen Republicans refused to follow the mask mandate on the House floor Wednesday and risked being fined. Like a handful of other Republicans, Rep. Hal Rogers, R-Ky., walked onto the floor without a mask but put one on when Rep. Greg Pence, R-Ind., reminded him that "you gotta wear a mask."

Republicans have refused to follow the mask guidance in the past with Rep. Marjorie Taylor Greene, R-Ga., and other fervent pro-Trump Republicans taking pictures of themselves maskless on the House floor and incurring fines. Greene has likened the push to get people vaccinated to the treatment of Jews during the Holocaust. She later apologized for those comments after visiting the Holocaust Museum in Washington, but has continued to compare Democrats to the Nazis.

Greene, Rep. Thomas Massie, R-Ky., and Rep. Ralph Norman, R-S.C. filed a lawsuit in U.S. District Court against Pelosi over their fines, arguing that it violates the 27th Amendment since the penalty is taken from their paychecks.

Some Republicans have increased their calls for supporters to get vaccinated amid the spread of the delta variant, which is spreading at a higher rate in some GOP-led states. Senate Minority Leader Mitch McConnell last week urged Americans "to ignore all of these other voices that are giving demonstrably bad advice" about not getting vaccinated, but expressed skepticism to masking up in the Senate noting the "environment right here is pretty safe."

McConnell, who was vaccinated in December and has been promoting vaccinations in public remarks ever since, plans to run 60-second radio ads on more than 100 Kentucky radio stations in coming days promoting the vaccine with money from his reelection campaign, McConnell spokesman Doug Andres tweeted Wednesday.

Information for this article was contributed by Mike Debonis of The Washington Post. 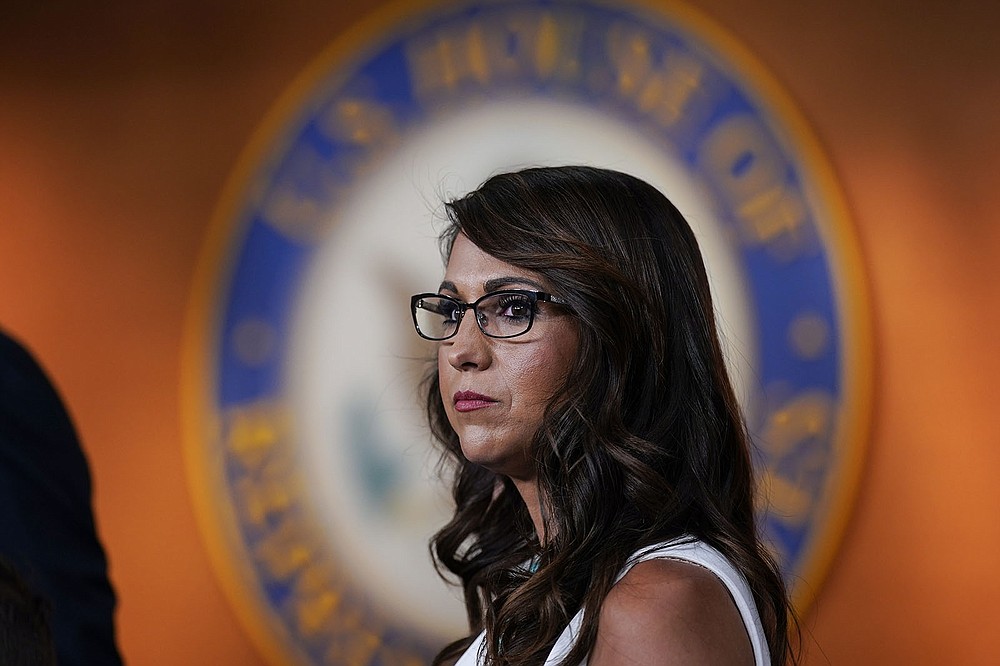 Rep. Lauren Boebert, R-Colo., pauses during a news conference to announce her resolution to censure President Joe Biden, claiming he is not enforcing border security and immigration laws, at the Capitol in Washington, Wednesday, June 23, 2021. (AP Photo/J. Scott Applewhite) 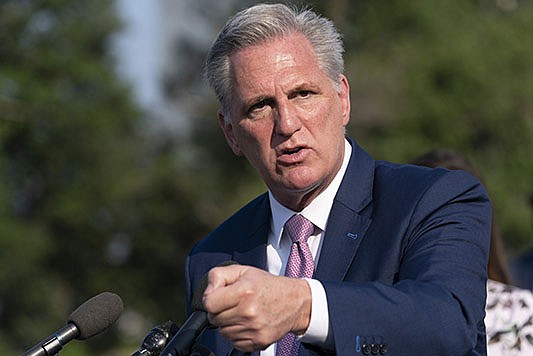