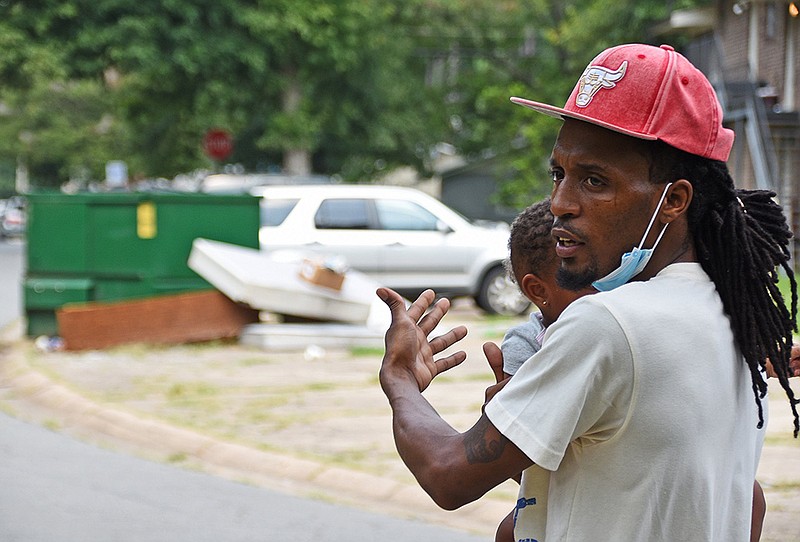 Khyrion Lewis holds his 9-month-old daughter, Layla, while speaking during a news conference about issues with his southwest Little Rock apartment complex on Arapaho Trail, including the trash bin pictured at left. (Arkansas Democrat-Gazette/Staci Vandagriff)

Sharon Jackson estimates she spends $40 per month on bleach and cleaning supplies, which she uses every day, to remove the smell of sewage from her apartment in southwest Little Rock.

She also said that she -- not her landlord -- cuts the grass outside the roughly 20 units of her apartment complex on Arapaho Trail.

Jackson alongside several neighbors spoke at a news conference Wednesday organized by the tenants' rights advocacy group Arkansas Renters United to bring attention to poor living conditions at the apartments.

Housing advocates said that the conditions at these apartments reveal the limitations of a new state law enacted this year to provide some protections to renters.

"It's not livable right now," Jackson said. "My kids are getting on me about staying here."

Khyrion Lewis, one of Jackson's neighbors, said the water is contaminated in his apartment where he lives with his 9-month-old daughter.

"There's a chance I won't be staying here much longer because it looks like no one cares," he said. "We call [management] and we get no response."

Tenants who said they are not behind on their rent, including Jackson and Lewis, have written a letter to the property's owner, Casey Denby of Parker, Colo., the registered agent of the Los Panas LTD holding company. The letter demands immediate repairs to several conditions of concern.

"We have had serious sewer back-up in several apartments as well as serious electrical problems," the tenants wrote in the letter, which is on Arkansas Renters United letterhead. "The sewer back-ups have caused human feces to come into our sinks, bathtubs and floors. ... There is also mold in several apartments. The outside premises are not kept up. The dumpster needs to be placed in a different location and the garbage needs to be emptied regularly."

Denby referred all media inquiries to Keith Pike, a lawyer and the owner of the Re/Max Elite real estate agency in North Little Rock. Re/Max real estate associate Kathleen Stafford is the manager of Denby's property.

Denby bought the property without seeing it in person and still has not visited, Pike said, but the goal is to "revitalize" and "help clean up areas of Little Rock that need investment." The complex does not have a name, so tenants call it Arapaho Trail apartments.

Pike said Denby has financed a number of renovations at the complex, such as new flooring and countertop installations, and Re/Max is seeking bids for more renovations and repairs, including solutions to plumbing problems.

Bobbie Taylor, an organizer with Arkansas Renters United, said she has not seen any proof of these efforts.

"I've been there every day or every other day [for two weeks]," Taylor said. "I've never seen maintenance improvement, grass cutting, nothing the whole time I'm going out there."

Pike said Denby "inherited a big mess" from the property's previous owner. Additionally, Re/Max is the third management company to oversee the property since Denby purchased it in April, Stafford said.

Stafford has visited the property three times since Re/Max took over management July 1, she said, and she once "sat and listened to the tenants talk for hours." They told her they had never met any of their previous property managers, including under past owners, which Stafford said was "disconcerting."

"I wish I could fix [their problems] really quickly, but it's going to take a little bit for us to get in there and update those apartments and get everything situated," she said.

Jackson told the Arkansas Democrat-Gazette that Stafford appeared reluctant to enter her apartment to see the sewage problems in her bathroom. Stafford also has not yet delivered on a promise to hold a meeting with all the tenants to hear their concerns, Jackson said.

The frequent management changes have left tenants confused. When Stafford left notes on tenants' doors at the end of June to tell them she was the new property manager, Jackson panicked because she thought the piece of paper was an eviction notice, she said.

Pike and Stafford both said Re/Max employees have been to the apartment complex several times this month. Taylor said to her knowledge they have only arrived a handful of times "to get rent and to evict people."

He also said the tenants who spoke at the news conference must have been the ones facing eviction, but no one named in the court documents was present at the conference.

"No one who spoke this morning would have [spoken] if they were facing eviction," Taylor said. "They're trying to stay as long as they can."

The tenants' letter was sent to Denby's home address in Colorado by the Postal Service because Arkansas Renters United does not have an email address for him, organizer Neil Sealy said.

Arkansas' first statewide standards for rental housing became law earlier this year. Under Act 1052 of 2021, tenants can move out without penalty and get their security deposits returned if landlords don't provide a sanitary sewage system, among other requirements.

Tenants must be current on their rent, and landlords have 30 days to remedy problems. Sealy and others have criticized the law, saying it doesn't go far enough to protect renters. Tenants, for instance, "would be stuck" for up to a month in the presence of an "urgent health hazard" like the sewage problems at Arapaho Trail.

"[Denby] should have had these apartments checked out when he signed the mortgage in April," Sealy said.

The new law requires that rentals have:

• A source of hot and cold running water.

• A source of electricity.

• A source of drinking water.

• A functioning roof and building envelope.

• A sanitary sewage system and plumbing.

A bill with more stringent requirements -- such as pest and mold control, working smoke alarms, locks and units that "are in good repair" -- had the support of advocates but failed on the House floor after passing in committee.

Additionally, the law applies only to leases entered or renewed after Nov. 1, so tenants still have months to wait until the law has effect.

Taylor said tenants would be aware if management had responded to their concerns so far.

"If an improvement is being made, I don't care if it's very small [because] it will grow," she said. 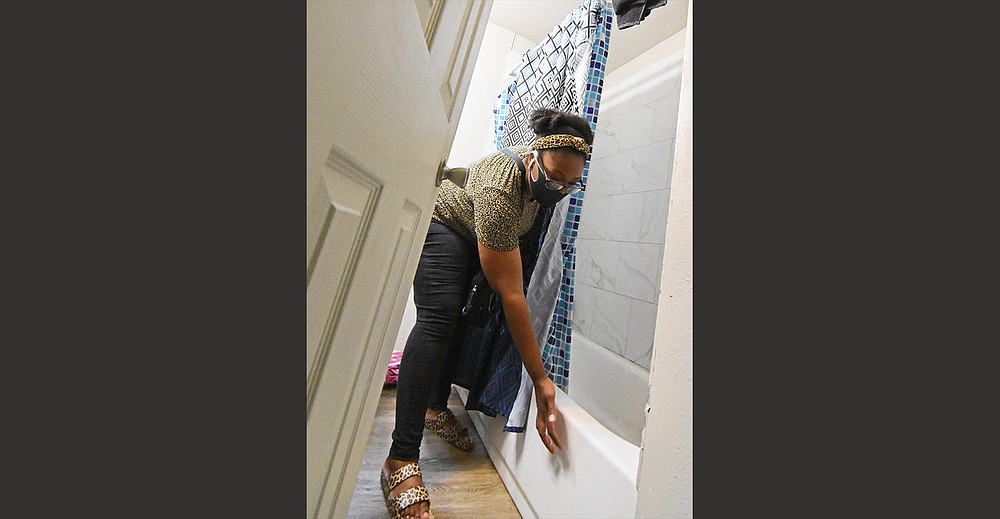 Tina Marbley talks after a news conference Wednesday about issues her son has regarding the condition of the bathroom in his apartment at 3518 Arapaho Trail in southwest Little Rock. (Arkansas Democrat-Gazette/Staci Vandagriff)