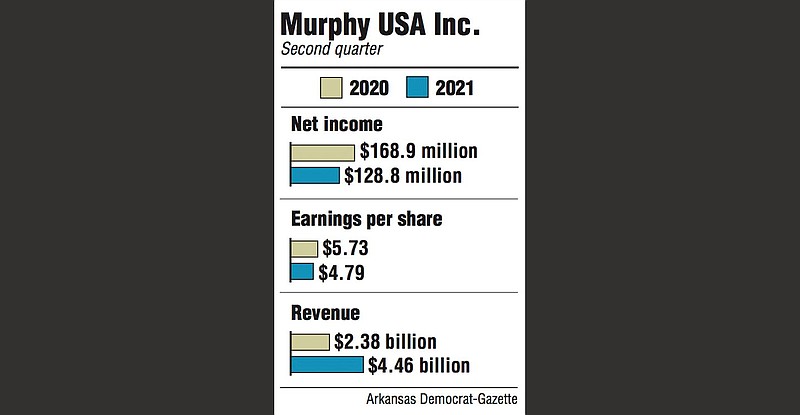 Murphy USA delivered strong second-quarter results during the most challenging operating environment in its history, the company said Wednesday after the stock markets closed.

Murphy USA attributed the drop in net income to decreased fuel contribution, higher store operating expenses and increased payment fees. These were partially offset by higher merchandise sales and margin, the company said in its report.

Earnings per share exceeded the average estimate of $3.20 expected by five analysts surveyed by Thomson Reuters.

"Supply chain issues, labor shortages and Colonial Pipeline interruptions were just a few of the challenges around which our teams were forced to navigate and overcome," said Andrew Clyde, the company's president and chief executive officer.

"Nevertheless, results were resilient despite these challenges and underpinned by strong fundamentals" as customer transactions and fuel volumes trended higher in June, Clyde said.

Retail fuel margins in the quarter fell 31.2% compared with last year's second quarter because of rising fuel prices, the company said in its earnings report.

However, the number of total retail gallons sold climbed 32.6% over the previous year, while volumes on same-store sales, or stores open at least a year, increased 22.4%.

Murphy USA now has 1,662 stores with another 29 under construction, the company said in the earnings report. Most of its stores are near one of Bentonville-based Walmart Inc.'s stores.

Company executives will host a conference call at 10 a.m. today to discuss the first-quarter results. Anyone wishing to participate may dial 1-833-968-2218 and use conference ID number 6739389.

The call may also be accessed through a webcast at http://ir.corporate.murphyusa.com. Earnings and other investor-related materials will be posted at the same website.

The webcast will be available for replay one hour after the call ends, and a transcript will be released shortly afterward.