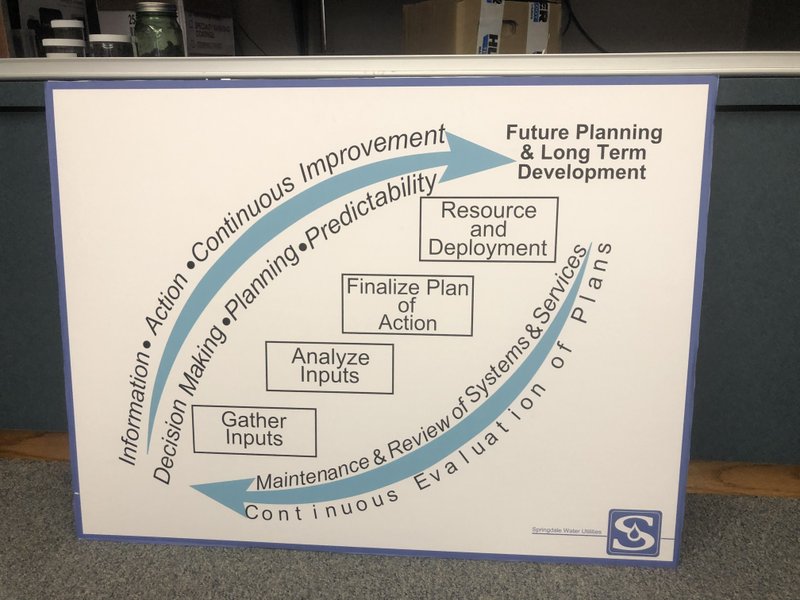 In this 2019 file photo members of the Springdale Water and Sewer Commission followed this model as they developed a strategic plan for the future of the utility's service to customers.

SPRINGDALE -- The pace of growth in Northwest Arkansas is quickly overcoming existing infrastructure, and the Water and Sewer Commission wants the developers to help pay to add more.

The commission gave its OK on Wednesday to let bids for a study of the situation. An outside company would consider the needs, the opportunities for funding and how much to charge, explained Heath Ward, executive director of Springdale Water Utilities. He expected the study to cost from $40,000 to $60,000.

A committee of engineers and builders put together by the commission also will add input to the report.

Developers currently pay and build all the sewer infrastructure inside a subdivision, hooking to the city's main pipelines and even hookups for individual taps and fire hydrants, and donate land for utility right of way, local developers noted. Sometimes they even build a new pumping station to carry wastewater from the development to the city's sewer system.

The commission currently pays the engineering costs of a project, to ensure it's built to the city's specifications, Ward continued.

Ward said the commission and the developers sign contracts for each project, agreeing to expectations and price.

"The system we have seems to be working real well in my opinion," said Philip Taldo, who is involved in development projects across the region. "That's the way it's been for so very long."

Tim Boudrey of Landmarc Custom Homes said he would rather consider his cost for the improvements on a case-by-case basis than pay a set fee, because the work and costs can depend on current infrastructure, topography and more.

And Taldo insisted the study and any formula for developing fees to be transparent and published.

Ward said that by paying to install or upgrade the infrastructure, the developers also are paying for the capacity of the system their projects will use.

"The reason to expand a lift station is to benefit the people living there," he said.

Ward said a sewer customer living in downtown Springdale should not have to pay for an upgrade that will not serve him. The public shouldn't have to bear 100% of the cost, which will happen if developers don't cover some of the cost, he said.

The commission wants to share the costs of building infrastructure with the developer, Ward said.

"We try to be very fair. We do not charge the developers 100%," he said. "And we take care of the infrastructure into perpetuity so they don't have to."

For example, the George family will pay 80%, or $1.28 million, of the cost of a new pumping station to serve their development in the Arvest Ballpark District, Ward noted. The commission will pay $400,000.

Ward said he was approached by three developers in as many weeks who wanted to build subdivisions of nearly 500 homes, which all would drain into the same basin east of Springdale.

But planned expansion of two sewer lift stations that currently serve the area will operate at capacity again by the time the construction of the homes is complete, Ward said.

Rick Pulvirenti, chief engineer and operating officer for the utility, said those eastern pump stations handle 1,600 gallons of wastewater a minute for 2,300 houses and about 6,000 to 7,000 people. The pump stations also serve some existing houses in the basin.

The budget for the project was set just under $4 million, with the developers paying $850,000. Pulvirenti pointed out that budget was set in 2019, and construction costs have increased.

"We have the lowest cost of water and sewer service in Northwest Arkansas," Taldo noted. "But is that always a good thing?"

He wondered if the commission could raise the rates to pay for the infrastructure and still have the lowest cost for service in the region.

The commission raised rates in 2020 after a two-day session for long-term planning prioritized infrastructure projects. Ward and commission chairman Chris Weiser expressed hope that the commission would not ask for another rate increase until 2025.

Residential customers living in Springdale city limits pay a basic rate of $10.30 for 1,500 gallons of water a month and $10.30 for 1,500 gallons of wastewater per month, according to the utility's website. The utility also serves parts of Lowell, Johnson, Elm Springs and rural customers east of Springdale with some combinations of water and sewer service.

Projects set by the commission's long-range plan included $9.5 million to replace and improve pipes collecting sewage and pump it to the treatment plant. Some of the pipes under the older parts of town have served the city for more than 50 years, Ward said.

The commission also is working to install a 36-inch pipeline to carry water to the west side of town, where officials expected heavy residential and commercial development. The $38.3 million project would include a water storage tank and would close a loop of pipes, improving water pressure for both fire safety and development.

The project also would connect to a delivery system Beaver Water District plans to build to serve the western district throughout Washington and Benton counties, Ward said.

"We thought there would be growth out east. But we didn't expect it this quick," Ward said of the recent housing boom. "So we considered the project low priority. But something happened."