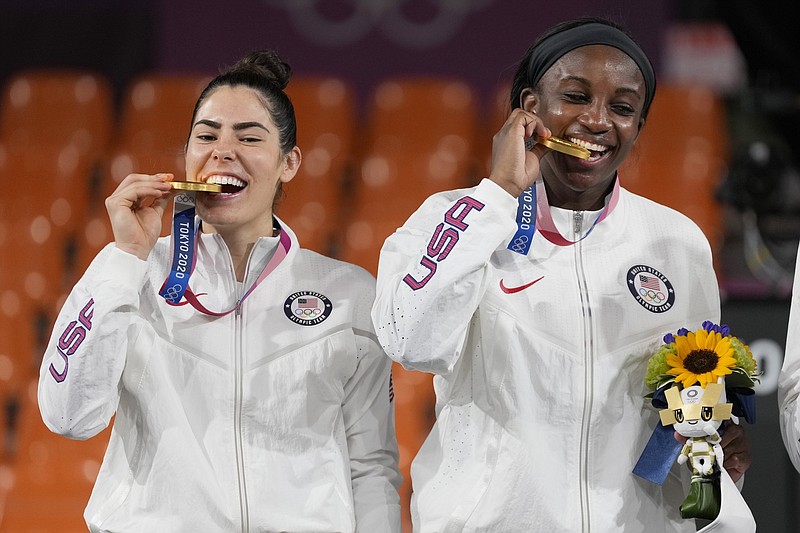 Kelsey Plum (left) celebrates with her gold medal after helping lead the United States to a victory over the Russian Olympic Committee in the final of women’s 3-on-3 basketball. Plum is a graduate assistant coach at the University of Arkansas. Her teammate Jacquelyn Young (right) is also shown with her gold medal. (AP/Jeff Roberson)

TOKYO -- The sky was dark, the hot air was thick, the music was loud and the lights were bright, a rookie sport getting its golden moment Wednesday night.

A sport that seemed so silly and so contrived a week ago now seemed so central to what these Olympics could have been, a few thousand people bobbing their heads to a Daft Punk song while they watched a cobbled together group of WNBA stars win 3-on-3 basketball's first ever gold medal.

Her team had just beaten the Russian Olympic Committee in the tournament final, 18-15, to conquer this new version of the sport in a mostly empty stadium.

The fact that Plum, a graduate assistant at the University of Arkansas, was even competing is incredible.

A year ago she was in bed, unable to even go to the bathroom without help. She had torn her Achilles tendon, as scary an injury a basketball player can endure. She did it playing 3-on-3 in a series that was tied after four games.

Plum spent the early stages of her recovery reliant on a scooter. A little more than a year later, she walked off the court with gold and a passion for basketball's rebellious sibling.

"It's a place where you can kind of let your hair down," U.S. teammate Allisha Gray said.

In an Olympics where there's been so much heavy news, so much disappointment, the 3-on-3 tournament has been a perfect palate cleanser.

Someday, the sport will get the crowd it's designed for -- a single-serving of basketball where the games end in 10 minutes and is a high-speed, open-road demolition derby that somehow combines skill, space, physicality, intensity and drama.

That was the idea to begin with, to capture the energy of the world's playgrounds, the no-blood, no-foul mentality, the play to 21, ones and twos. Then you put it in an intimate venue, dress it up with music and commentary.

And then you hang on.

"It was going to be something new, something different," U.S. player Stefanie Dolson said. "And that's exactly what it is."

The U.S. women's team melded the different styles of its players, Plum's swagger, Dolson's size and skill, and Gray's shooting and slashing. When one of their players, Katie Lou Samuelson, tested positive for covid-19 less than a week before they departed, the team added Jackie Young and kept moving.

It was chaotic, but so is this game. Earlier in the tournament, Italian guard Rae Lin D'Alie called 3-on-3 "a tornado." And while it might not have been a sensation, it had built significant word-of-mouth buzz among the journalists covering the Games in Tokyo.

The Olympic debut of 3-on-3 showed how fast and physical basketball could be served in bite-sized helpings. Leads were built and vanished in seconds, and even the in-house music couldn't mask the sound of shoulder-block screens and judo post defense.

"Nothing like it," Dolson said with a smile, the referees largely functioning as set decoration for the action.

Wednesday night went about as well as organizers could've planned. The U.S. survived a tight game with France before winning in the final, giving 3-on-3 some recognizable names and faces on the podium. And the men's final ended when Latvia hit a walk-off two-pointer to beat Russia, a reminder of the swift finality the sport can offer.