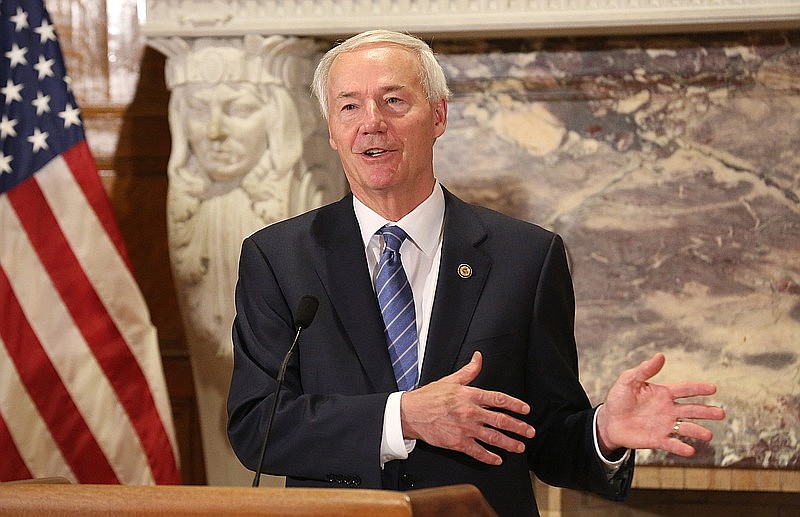 ​​​​​Gov. Asa Hutchinson on Thursday reinstated Arkansas' public health emergency and said he would call a special session to lift a state law's prohibition on mask requirements for kindergarten through 12th-grade public schools.

At a news conference at the state Capitol, Hutchinson also said he would ask other states to send health care workers to Arkansas and ease its licensure requirements to help hospitals with staffing.

He said he had also asked the White House to send a surge response team to Arkansas to help evaluate the state's hospital capacity.

Hutchinson made the announcements as the state's count of cases rose by 2,843 -- the largest one-day new case total since Jan. 21.

After rising for the previous 23 days, however, the number of covid-19 patients in Arkansas hospitals fell by nine, to 1,055.

The state's death toll from the virus, as tracked by the Department of Health, rose by 11, to 6,110.

Hutchinson said the special session, which will likely be held next week, would be limited to making an exemption for kindergarten through 12th grade public schools because vaccines have not yet been authorized for children under age 12.

Gov. Asa Hutchinson will provide a media update at 1:30 p.m., according to a news release by the governor's office.

[Video not showing up above? Click here to view » https://www.youtube.com/watch?v=JpwZAen_WX8]

CORRECTION: The state's count of cases rose Thursday by 2,843 -- the largest one-day new case total since Jan. 21. An earlier version of this article misstated the date.