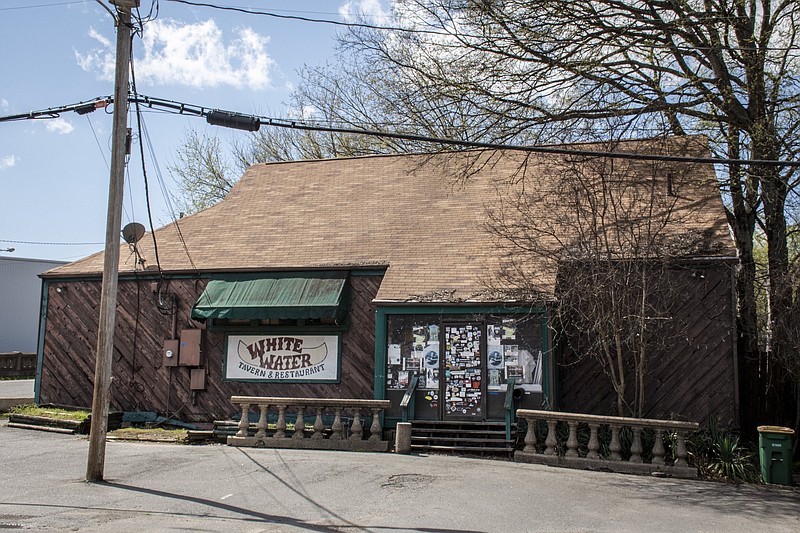 New owners Travis Hill and Natalee Miller are set to reopen Little Rock's venerable White Water Tavern, 2500 W. Seventh St. at Thayer Street, at 4 p.m. Aug. 6 with a full live entertainment lineup and, for the first time in a decade and a half, an actual working kitchen that will be open and serving the same hours the club will be open: 4 p.m.-midnight Tuesday-Thursday, 4 p.m.-1 a.m. Friday, 4 p.m.-2 a.m. Saturday and 4-9 p.m. Sunday. ("For the past 15 years we pretty much outsourced that," Hill says.)

Shane Clinton, formerly of Four Quarter Bar, is in charge of the kitchen; his menu is still in the works, but Hill says it is likely to feature "the classic White Water burger," fries, a grilled cheese sandwich, a vegetarian option and specials that could include catfish and pulled pork. The club received its mixed-drink license from the state Alcohol Beverage Control Division last week, Hill says. Former owner Matt White will continue to manage the White Water's entertainment.

Hill says he and his partner also bought "all the land behind the White Water as well as the parking lot across the street," which the former owners had rented, "to make sure that we didn't have to worry about development to ensure the longevity" of the club. And in the spring, he said, he's planning to apply for a re-zoning to expand the rear beer garden. The Saturday farmers market has moved to the green space at the rear of the property. 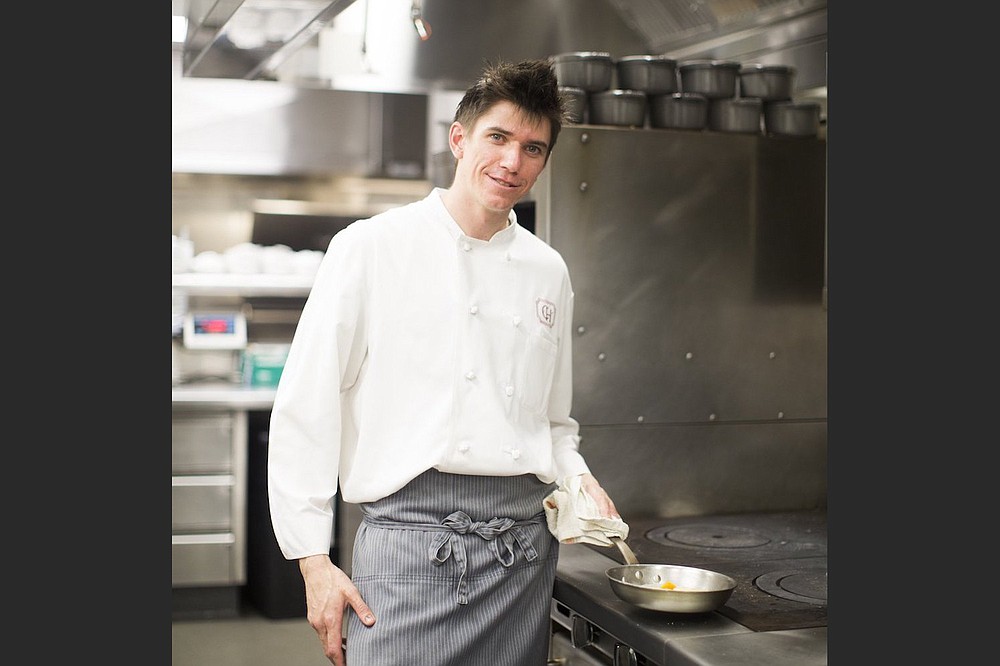 Brad Izzard, in the Capital Hotel kitchen in 2015, has been named the hotel's executive chef. (Democrat-Gazette file photo/Arshia Khan)

Brad Izzard, who had served as chef de cuisine under former executive chef Joel Antunes at One Eleven at the Capital, has been named the executive chef of the Capital Hotel. Hotel general manager Terry Bechtold says Izzard spent most of the time the hotel was closed working at a country club in Oklahoma, a demanding situation that has resulted in considerable growth in Izzard's career. Izzard, he says, "is in the process of creating fantastic menus" for One Eleven, which has a target to open for breakfast around the second week of August and for dinner sometime in September, contingent on being able to hire enough cooks and sous chefs; and also for Capital Bar and Grill, which has been open, with limited menu and limited staff, since May. "We're still working through those challenges," Bechtold says. He adds that sous chef Jacqueline Kay Swearengin has rejoined the hotel's kitchen crew.

We're not sure when it closed, but replacing La Casa Real, 3700 John F. Kennedy Blvd., at the crest of North Little Rock's Park Hill, will be Fujiyama Sushi & Hibachi Express. A coming-soon banner hangs over the front windows. One of our readers links it, possibly, to the North Little Rock-based Fujiyama on the Wheels food truck.

Has Excaliburger gone? Well, yes and no: "Not forever, just for a season," says owner/founder Kyle Pounders on Facebook (facebook.com/Excaliburger), as he sets up a World Central Kitchen staging station in Louisiana to serve front-line workers during hurricane season and works on another project. He suggests checking in on the website, excaliburger.com. However, it does make it unlikely that Excaliburger would be participating, as we reported last week, in Rock City Burger Week, Aug. 23-29.

We're getting conflicting information on the status of Grady's Pizza & Subs, 10901 N. Rodney Parham Road, Little Rock. A reader who dines there regularly says it has closed permanently, although the original location at 6801 W. 12th St., Little Rock, remains open. The restaurant did post on July 10 on Facebook that "[w]e will be temporarily closed at this location while we quarantine. Unfortunately an employee has tested positive for covid-19. Our 12th street location will remain open for business." Meanwhile, calls to the restaurant's phone number, (501) 904-2822, transfer to the 12th Street location, where the employee who answered tells us the Rodney Parham closure is, indeed, temporary. There's no other indication either on the Facebook page (facebook.com/Gradys RodneyParham) or at the website, gradyspizza-subs.com.

Other covid-related closures and cutbacks:

◼️ Bruno's Little Italy, 310 Main St., Little Rock, posted on Saturday that it, too, is temporarily closed after an employee tested positive for covid-19, and will reopen "once we have all tested negative, quarantined and have re-sanitized the facility."

◼️ The Root Cafe, 1500 Main St., announced on Facebook July 22 that it was closing its indoor dining room, which had only just opened July 10, in response to the rise in covid-19 cases "due to the delta variant." Service will continue on the patio and at courtyard tables.

A building permit request filed recently with the Little Rock Planning and Development Department calls for $600,000 in plumbing, electrical, and mechanical work for a "remodel/alteration of a tenant space of an existing mixed use building used for a restaurant" at 515 Shall Ave., Little Rock. Yes, that is the address of the former Cathead's Diner. No, we don't know yet whether or not it will be another restaurant.

Google says Agasi 7, the rooftop bar on top of the downtown Little Rock Hilton Garden Inn, is permanently closed, but the folks who answer the phone — (501) 244-0044 — at the hotel, 322 Rock St., say it will reopen Labor Day weekend. The rooftop bar did close down last fall, according to this Facebook post from Oct. 16: "Due to covid-19 and Social Distancing requirements put into place by the Governor, Agasi 7 is closed to the public until further notice. However, the space may still be rented for private events."

The Little Rock Board of Directors last week authorized, by a voice vote, the long-term use of the alley off West Seventh Street just east of Broadway by a new Chick-fil-A that will involve the demolition of the former McDonald's and will be geared to drive-thru service. The developer has agreed to pay the city $198,000 for the long-term use of the city right-of-way. A traffic study will be required as part of the release of a building permit, for those concerned about the traffic that could build up, especially considering the presence of several other fast-food outlets — including Taco Bell, Popeyes, Jimmy John's, Wendy's and Rally's, all of which have drive-thrus, within a couple of blocks.

Brooklyn-born Anthony Valinoti, who revolutionized Arkansas' pizza landscape when he opened DeLuca's Pizza in Hot Springs in 2013, is teaming up with former Oaklawn Park track announcer Frank Mirahmadi to create Frank DeLuca's, set to open in September in Versailles, Ky., reports the Lexington Herald Leader (kentucky.com/lexgoeat/restaurants/article252898513.html 1/8). As with DeLuca's, everything except the pasta will be cooked in the brick oven, including the hamburgers. Mirahmadi's brother, Fred, will be the executive chef; the place will have 64 seats and a full bar. And the Kentucky restaurant could be the first of many, the Lexington paper reports. Mirahmadi, also the track announcer at Monmouth Park in New Jersey and Santa Anita in California, promoted Valinoti's early pizza efforts via social media; the restaurant, now in its second incarnation at 831 Central Ave., Hot Springs, garners all sorts of top Hot Springs and statewide poll spots and attracted high marks from Southern Living and Food and Wine magazines.

The North Little Rock Convention and Visitors Bureau is starting a drive called "Setting the Table" to "define and strengthen culinary tourism for the city," according to a news release. Details are yet to come; the idea, according to Karen Trevino, bureau president and CEO, is "to position North Little Rock as a regional and national culinary tourism destination," and "to amplify current culinary assets in North Little Rock, find the undiscovered gems and identify opportunities for new or improved culinary experiences." Updates, when they become available, will be available at northlittlerock.org/north-little-rock-setting-the-table-culinary-initiative.

Three Arkansas restaurants, two in Fayetteville — Bordinos Restaurant and Wine Bar, 310 W. Dickson St., and Vetro 1925, 17 E. Center St. — and Postmasters Grill, 133 W. Washington St., Camden, have received Awards of Excellence from Wine Spectator magazine, which recently released its 2021 Restaurant Awards, recognizing 2,917 dining destinations in all 50 states and more than 72 countries. It's the lowest of three honors the magazine extends annually; the other two are the Best of Award of Excellence and the Grand Award. Wine Spectator's special 40th anniversary restaurant awards issue also features tributes to past winners that have closed. Visit Restaurants.WineSpectator.com.