'Hail to the Deadites' 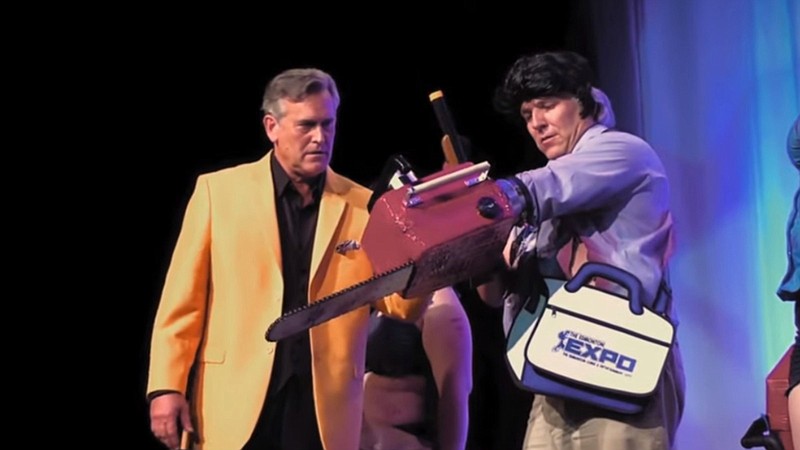 Bruce Campbell, who stars as Ash Williams in Sam Raimi’s “Evil Dead” and its sequels, inspects the costume of a cosplayer in a scene from the documentary “Hail to the Deadites.”

About a decade ago, my then-girlfriend thought I was crazy to give my friends Kevin and Anita a deluxe, book-bound edition of Sam Raimi's "Evil Dead II: Dead by Dawn" as a wedding present.

To her the decision seemed as ill-advised as many of the things Ash Williams (Bruce Campbell) does in Raimi's trilogy.

I'm happy to report that the two are still an item and still love the movies, although I'd be arrogant if I thought the replica of the "Necronomicon" I gave them is what has kept them together.

It has been 40 years since Ash and his friends made the mistake of reading the wrong book in the wrong cabin in the woods, so now is a great time for a documentary about the trilogy.

"Hail to the Deadites" tries to fill a void that can't be satisfied by all of the extras in the DVDs for Raimi's trilogy. The new documentary features no comments from Raimi even though he co-wrote and directed the films.

Instead, the new movie celebrates the lives of the fans and proves it's more than all right to love the gross and often comical scrapes the overconfident Ash gets himself into. The fans depicted here are levelheaded men and women who simply love Raimi's frantic visuals and Ash's living embodiment of the Dunning-Kruger effect.

There's something inherently funny about a fellow whose bravery comes from the fact that he doesn't understand the supernatural forces that have been toying with him.

Several of the fan stories are touching. A fellow who does a remarkable impersonation of Campbell is finally able to attend a convention because a mysterious donor known as "The Chin" has contributed to his crowd funding campaign. Two lovers become engaged when artist Tom Sullivan, who created some of the most memorable images from the films, helps with the proposal.

Steve Villeneuve is credited as the director of "Hail to the Deadites," but the film has been made by fans for fans. Charming moments like the ones listed earlier might not have come from outsiders. Conversely, the film's one-hour, 19-minute running time frequently seems ponderous because the fan conventions all look the same, regardless of where they are held.

You've seen one hotel ballroom; you've seen them all.

Campbell's wisecracking presence is welcome, as is the chance to see the other performers from the series. The interviews with Sullivan and the cast members are unfocused, as are the stories of the fans. "Hail to the Deadites" flits from one fan to the other the way Raimi's running camera does in his movies. Before we can get to know anyone, we're off to another ballroom.

The delightful 2D and stop motion animation segments hide the fact that Villeneuve fails to pose a question to these fans: Why do they love the movies so much? He assumes the viewers are fellow Deadites, but it would have to explore why the movies, which started with the no-budget horror classic, have an enduring appeal.

I own Blu-Rays of all three movies and have an "Army of Darkness" lunch box. Even I want to know why others love the movies as much as I do.

‘Hail to the Deadites’

The film is available for streaming via most digital platforms.

Print Headline: 'Hail to the Deadites'