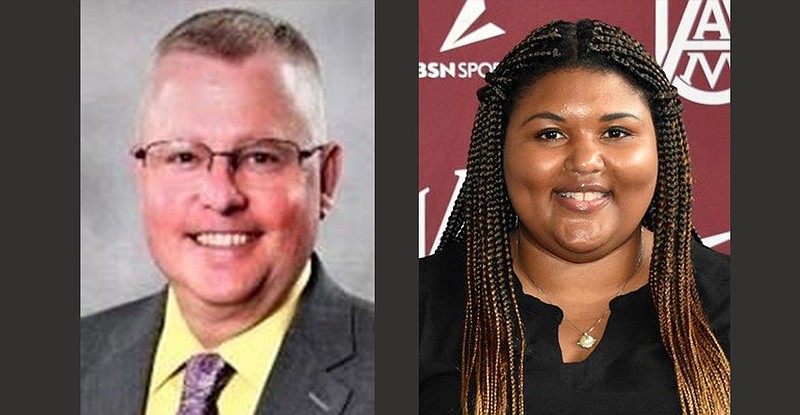 Shown from left are Ken Hamilton and Ka’Lisa Stanfield

Recent Texas junior college coach Ken Hamilton has been hired as head coach of the University of Arkansas at Monticello men's and women's golf teams.

According to a news release, Hamilton spent the past four years at Jacksonville College in Texas, where he also served as athletic director since 2019. Prior to that, he was assistant athletic director.

Hamilton thanked UAM Chancellor Peggy Doss and Jackson for the "wonderful opportunity to join the UAM family" and the trust to build a championship men's and women's program.

"Success on the golf course is certainly a goal, but I was extremely impressed and excited to hear the focus that UAM places on the total student-athlete," Hamilton said. "One of my greatest joys is to see a student-athlete not only doing well athletically but doing well in the classroom and developing as a young adult, making certain when they leave UAM they have the tools to be a successful professional."

Hamilton shot a 62 at a regional tournament while at Texas' Troup High School in 1981 and went on to play at Jacksonville. He earned his bachelor's and master's degrees from Texas A&M University-Commerce and is a veteran of the U.S. Navy and a former freight industry manager.

"We are excited to have Ken come on board to lead the men's and women's golf programs here at UAM," Doss said.

According to an AAMU news release, Stanfield served as the assistant athletic director for compliance in addition to her SWA role at UAM, where she was responsible for overseeing softball and men's and women's golf. She also managed UAM athletics' efforts with transcript and initial eligibility evaluations, as well as student-athlete visits.

In three years at UAPB, Stanfield rose from scholarship/tour coordinator to compliance and academic intern and then academic counselor and special events coordinator. She's also served on search committees for an academic advisor and head women's basketball and volleyball coaches while being part of the Division II Governance Academy and selected for the Minority Opportunities Athletic Association Grant.

Stanfield earned her bachelor's degree from UAM in 2014 and master's from Southern New Hampshire University in 2016.