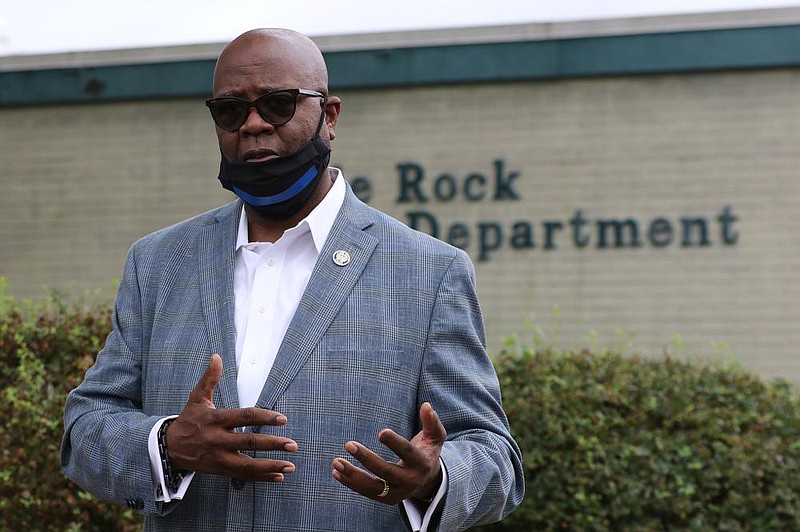 Little Rock this week declined to release records to the Arkansas Democrat-Gazette when asked for materials related to an investigation of complaints within the Police Department that was overseen by an Arkansas Tech University professor.

The decision to withhold an investigative report produced as part of the review is now the subject of an Arkansas Freedom of Information Act lawsuit against the city filed July 23 in Pulaski County Circuit Court on behalf of four police officers.

In a July 14 letter to the Arkansas attorney general contained in court filings, Newcomb said the officers "complained of wrongdoing" by Police Chief Keith Humphrey.

Loretta Cochran, the Arkansas Tech University official who conducted the review, is an associate professor of management in the department of management and marketing, according to the school's website.

According to a spokeswoman for Mayor Frank Scott Jr., Cochran is serving in a temporary part-time role with the city.

Newcomb requested on June 24 a copy of Cochran's completed report, which he described as "involving complaints made by Officers on how they were treated by the Little Rock Police Department," according to a copy of his request contained in court filings.

His open-records request led Shella Atlas Evans, the city's labor and employee relations manager, to ask for an opinion from the office of Attorney General Leslie Rutledge.

In response, the attorney general issued an opinion July 14 to Atlas Evans in which Rutledge suggested the report could be withheld consistent with the Freedom of Information Act, but some documents in the investigative file may be subject to disclosure.

The city had classified the final investigative report created by Cochran as "a performance and/or evaluation record" that was not subject to release, except for any portion considered the personnel record of the employees who submitted complaints regarding their treatment, according to the opinion.

The majority of the other documents in the investigative file also were deemed unreleasable except for certain supporting documents submitted by complainants, according to the opinion.

Based on the stated facts, Rutledge found the report to be an employee-evaluation record of the individual being investigated, though she did not name this employee.

The attorney general's opinion said the decision not to release the report was consistent with the Freedom of Information Act because the city's correspondence indicated no decision had been made yet as to disciplinary action -- one of the required elements if an employee-evaluation or job-performance record is to be released.

But the city's "apparent decision" to lump together remaining documents contained in the investigative file and classify them employee-evaluation records, thus preventing their release, "is likely inconsistent with the FOIA," Rutledge wrote.

"The custodian must review and properly classify each record in the file deemed responsive to the FOIA request and then apply the applicable test for disclosure," Rutledge added.

According to the officers' complaint, the city provided some documents after Rutledge issued the opinion, including a list of promotions in the department and a document showing transfers broken down by race.

Records requests were submitted by the Democrat-Gazette this week after the officers filed their lawsuit.

Three requests from the newspaper for Cochran's report and underlying materials, any reports with Humphrey as the subject (or a subject) as well as relevant correspondence sent and received by Scott were all closed, with no records provided.

Unsigned emails from the city's Freedom of Information Act coordinator in response to each request said there were no public records responsive to the request and added that "these matters have not reached its final administrative resolution."

Another request for correspondence from lawyers representing the city pertaining to a review of Humphrey had not been fulfilled by Thursday evening after the freedom-of-information coordinator asked for clarification on the request's language earlier in the week.

In a telephone interview Thursday, Newcomb described the Freedom of Information Act lawsuit as a possible precursor to another lawsuit by his clients, the officers.

"They have to make a decision whether they want to sue the chief and sue the city for what's happened to them," he said.

Newcomb suggested they had a duty to explore the facts as they exist, including the possibility that others might be able to confirm a hostile work environment or other types of misconduct by the police chief.

When asked whether the investigation carried out by Cochran specifically centered on Humphrey or if it served as a broad review of personnel issues within the department, Newcomb said he did not know.

He said that "it could be either, or both."

Newcomb said Little Rock City Attorney Tom Carpenter in a conference call with Pulaski County Circuit Judge Alice Gray on Wednesday indicated that he would review underlying documents that Rutledge believed might be subject to disclosure to see which records he agreed Newcomb could have.

Newcomb said his clients were all interviewed by Cochran and knew of others who were interviewed, too. His clients had originally filed complaints with the city's human resources department, Newcomb said.

Stephanie Jackson, a spokeswoman for Scott, said via phone Thursday that "there is no final investigative report. It has not been finalized."

She said the report has not made it to the mayor's desk, at which point Scott will determine if some sort of action needs to be taken. A suspension or termination decision could result in the release of the records, she said.

Asked about Rutledge's characterization of the document sought by Newcomb as a final investigative report, Jackson said that while human resources may be done, the city defines final as when "all parts of the investigation are done and it's made it to the mayor's desk and he's made a determination."

In a follow-up text message, Jackson said Cochran occupies a temporary part-time position for which she was hired in July 2020. The position was created by human resources to work through a backlog of reviews that the department had, Jackson wrote.

Scott appointed Humphrey, the former chief of police in Norman, Okla., shortly after the mayor was inaugurated for his first term in 2019.

Tensions between Humphrey and personnel within the department emerged in court last year when the chief was sued by a series of his employees, including two of his assistant chiefs, who claimed retaliation and discrimination.

Humphrey eventually countersued a list of individuals, as well as a local police union and a body-camera manufacturer, in federal court, alleging a conspiracy to oust him from his job, among other claims.