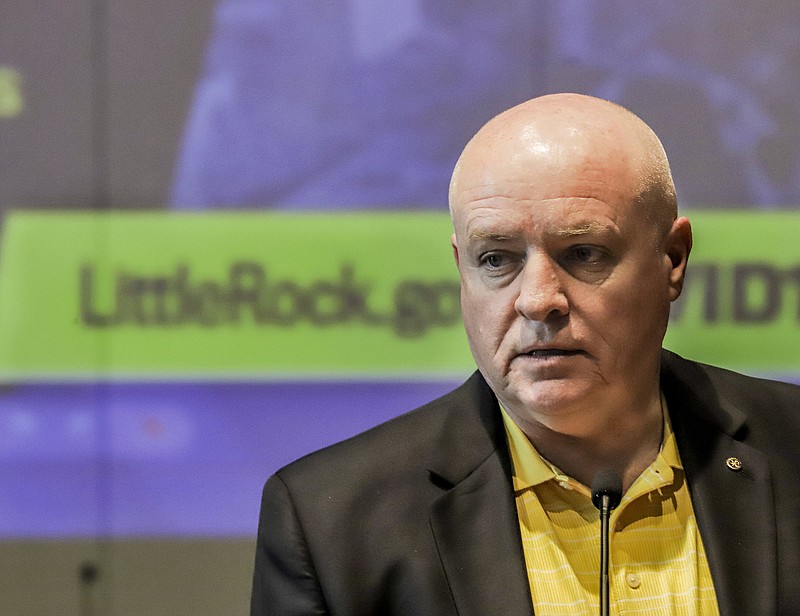 "If this is passed in November, we're turning dirt by Jan. 1," Poore said of a possible tax-extension election and a new $85 million school for 1,400 pupils at 9417 Geyer Springs Road.

Speaking at Southwest High School at the first of five community forums, Poore and Kelsey Bailey, the district's chief finance and operations officer, presented a draft list of $300 million in projects -- including the McClellan replacement -- that could be financed with the proceeds of a 12.4-mill tax extension.

The list of projects -- still subject to change based on needs identified during the public forums -- include a high school in west Little Rock, improved heating/air conditioning and ventilation systems, as well as new LED lighting, and replacement windows, roofs, flooring and playgrounds across the district. The auditoriums at Central High and Parkview Magnet High are on the list, as is a wing at Hall STEM Magnet High that is to be devoted to instruction in engineering.

The Little Rock School Board is expected to decide by mid-August whether to pursue a Nov. 2 election on extending by 19 years the levy of 12.4 debt service mills that are otherwise due to expire in 2033.

A extension of the levy beyond 2033 wouldn't increase a property owner's annual taxes, but the taxes would have to be paid over more years.

The extension of the debt service mills would enable the district to raise as much as $300 million through one or more bond issues over three years' time and then repay that bond debt over the longer term.

The school that would replace the existing Cloverdale Middle School and Baseline and Meadowcliff elementaries would be three stories with a circular class tower front entrance that would face Geyer Springs Road.

The design includes 64 classrooms, six project rooms for science, eight spaces for fine arts, four "maker" spaces and three career education rooms, a collaboration or learning stairway that can serve as a space for large group programs, a cafetorium, library/media center, self-contained classrooms for special need students, and a gymnasium.

Poore said the district has "squeezed hard" to use its facility resources well since the district last passed a property tax increase in 2000.

Bailey said the average age of district campuses is about 65 years old, and those older facilities often need new mechanical systems as well as updates to meet modern academic demands.

"Parkview is our arts and science magnet," he said. "They deserve an auditorium and facilities that pop. They should have the most exceptional spaces for performing arts in our entire district. You can't say that right now, just to be honest. You can say we have great teachers and you can say we have great kids in those programs. We want to enhance their experiences to prepare them for their preferred futures."

The district's tax rate is 46.4 mills, 34 mills of which are earmarked for operating costs such as employees' salaries, utilities and technology. The remaining 12.4 mills are earmarked for paying off bond debt for construction projects. The 12.4 debt service mills are due to expire in 2033 unless the tax levy is extended by voters.

"That's a complex problem" that would take up the bulk of the bond money to address, he said.

In regard to a possible high school in west Little Rock, Poore said such a school in the fast-growing northwest section of the district could help the district increase its overall enrollment. He and Bailey also said that a school would take three to four years to design and open. That early planning would be done in consultation with teachers, students and community members, Bailey said.

A November election on continuing the 12.4-mill levy would be the third time the district has taken the measure to voters.

Very similar measures were defeated last November and in May 2017. In both of those cases the district was operating under state control or at least state restrictions. The 21,000-student district has since been released from state management and restrictions.

The Little Rock district has scheduled additional public forums to present and collect feedback on in the proposed facility projects.

"This is a steppingstone. We've got a long ways to go," Poore said Thursday about the initial presentation.

Each of the sessions will be at 5:30 p.m. on the following dates and places:

The forums may also be viewed via livestream on LRSD's YouTube channel: www.LRSDlive.com.