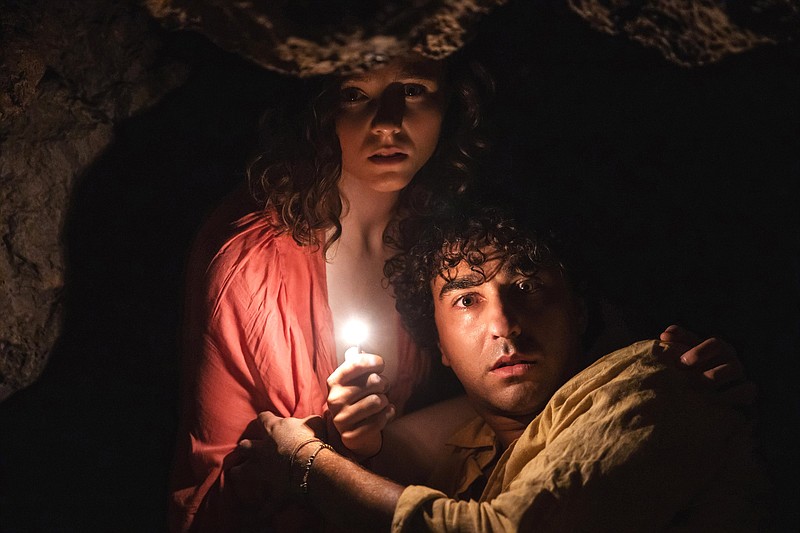 I don't mean for this to sound as mincing and mean as it will probably read, but, maybe it's time M. Night Shyamalan tried his hand at a silent film. Or at least one -- like, say, "All Is Lost"-- where the dialogue is nearly non-existent. The Philly-born director is a decent enough storyteller, as far as that goes, and peppers his films with glimpses of visual panache, but where he inevitably runs into trouble, as far as I'm concerned, is literally anytime a character speaks words to another.

This is doubly so when the writer/director attempts dialogue between married adults. His ear is somehow worse than tin (aluminum foil?), none of his interactions sound even remotely like actual human beings, and, as a screenwriter, he seems addicted to the worst sort of expositional malfeasance -- "You're always thinking about the future," an enraged wife yells at her husband, early in his new film, "it makes me feel unseen!" (not exactly "Scenes From a Marriage," that).

This unfortunate tendency, writing dialogue like an overly earnest 13-year-old might conjure up, plays unhappily with Shyamalan's second biggest weakness as a filmmaker: drawing performances from his actors. It's true not very many actors can do much with many of his cement-laden lines, but the director consistently shoots for a kind of neo-melodramatic effect that renders even talented veterans performing as if they were in a particularly strident summer workshop.

Unfortunately, his latest sort-of-thriller "Old" plays down to these weaknesses. We meet our family of protagonists -- parents, Guy (Gael Garcia Bernal), and Prisca (Vicky Krieps); and kids, 6-year-old Trent (played as a kid by Nolan River), and 11-year-old Maddox (Alexa Swinton) -- as they arrive at a fabulous vacation resort workaholic Prisca somehow managed to secure. Everything is luscious and ostentatious, the kind of place where a very wealthy "Thoracic Surgeon" named Charles (Rufus Sewell) would deign to visit with his elderly mother, Agnes (Kathleen Chalfant), trophy wife, Chrystal (Abbey Lee), and young daughter, Kara (Mikaya Fisher).

Along with these two families, we also quickly meet nurse Jarin (Ken Leung), and his epileptic psychologist wife, Patricia (Nikki Amuka-Bird). Their first morning at the resort, all of them are offered a special opportunity by the hotel manager (Gustaf Hammarsten), to visit an incredibly exclusive private beach, which they naturally accept.

Arriving via shuttle (driven by Shyamalan, who sneaks himself into many of his pictures), the mixed group makes its way down to the cliff-surrounding beach, via a dark, rocky pathway, and discover a beautiful cove -- along with a famous "rapper" Maddox excitedly tells her parents is none other than "Mid-Sized Sedan" (Aaron Pierre), leaning against a cliff edge with his nose constantly bleeding.

Before too long, of course, things get weird, with a dead body washing ashore, Charles' elderly mother suddenly collapsing and Trent suddenly getting too big for his britches, in the literal sense. What takes these idiots far too long to determine is there's a weird quality to this beach (via the rocks, we are told vaguely) that speeds up cellular deterioration in living creatures: Everyone ages a year for every half hour they stay there. Naturally, they are also trapped in place, every attempt at escape leading them to collapse in the rocky crevasse with which they entered. There's no cellphone service, Charles, the surgeon, starts to lose his marbles and become paranoid, and before we know it, Trent (now, as a teenager, played by Alex Wolff) and Kara (also a teenager, played by Eliza Scanlen), are expecting a child together.

As everyone freaks out and lurches around from one corner of the sand to another, Shyamalan and his DP, Mike Gioulakis, have some fun swinging the camera to and fro, swooping from one calamity to the next-- Someone else collapses! Another character is stabbed to death! Another body washes up in the shallows! -- and there's a hopeful moment there where it seems as if the film might tip all the way over in a Gaspar Noe-type vicious chaos, but Shyamalan, whose predictably shameless style makes even the most egregious Steven Spielberg spectacle seem like Terence Davies, can't quit his desire to bring everything back to his groaning narrative.

The film is based on the vastly better and more enigmatic French graphic novel, "Sandcastle," written by Pierre-Oscar Levy and drawn by Frederik Peeters, whose elliptical storytelling and unexplained plotline offer up a much more moving and haunting examination of aging and regret. The book's mysteriousness is much of what lends it a peculiar power, but Shyamalan dispenses such esoterics in favor of a ham-handed approach that better fits his own, overly explicable filmmaking impulses.

He's one of the more literalist directors working on American soil, uneasy and seemingly incapable of leaving things a poetic mystery (had he directed Peter Weir's "Picnic at Hanging Rock," one suspects he would have explained how the girls were snatched up by lollipop-headed aliens looking for a friend), he'd rather burn every viewer's eyes into molasses than leave a single stone unturned (if his work were written as short stories, nearly every one of them would end with the lines, "It was all a dream! Or was it ... ?").

Pity, then, this group of actors, encouraged to do these maudlin gyrations and ludicrous line-readings, while spouting off dialogue ("I'm an actuary, I calculate people's insurance rates, based on their risk profile") that dies off the tongue. The whole film is bizarrely filled with characters having to explain their professions -- later in the proceedings, "Mid-Sized Sedan" tells a now of-age Maddox "My mom was an attorney, and my dad was a dentist," honestly, is this a cinematic thriller or a Richard Scarry book? -- which leads eventually, more or less, nowhere other than to quickly be able to identify a doctor, or a cop when one is required.

For unintentional comedy's sake, Shyamalan has each of these characters perform his or her job description in the most literal of ways (the actuary keeps quoting leading-death statistics, while the psychologist at one point insists "We should all talk about what happened" after yet another body appears before them). The film never misses a chance to talk about different jobs "I curate for museums," Prisca says spritely, to indicate her readiness at identifying skeletal remains, no matter how peculiarly it throws off everything else. Maybe Shyamalan's kids are entering the job market.