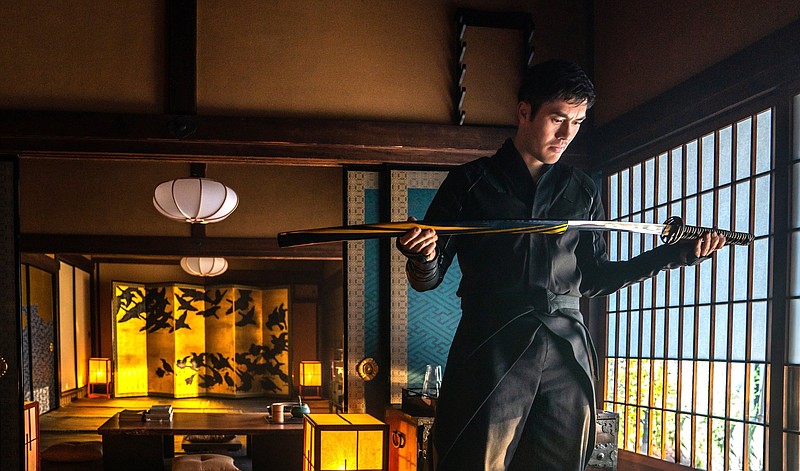 Henry Golding plays the title character — a dangerous loner who got his name when he saw his father murdered by an assassin who offered him one roll of the dice to live — in Robert Schwentke’s “Snake Eyes.”

It's reasonable to have low expectations for a movie produced by a toy company. Hasbro's action figures were designed with more care than the script.

But "Snake Eyes" often plays more like a martial arts movie than a simple act of fan service. Finding out how the masked commando honed his lethal skills before putting on his distinctive mask is occasionally more fun than it should be.

Director Robert Schwentke ("RED") makes fine use of real Japanese locations and coaxes decent performances from a cast who ignore the fact that their roles are molded in plastic.

About all we know for sure about the masked commando (Henry Golding) who is the title character is that he's usually a sergeant in the comics. Much of his appeal is that his past is a blank, and it can be fun to discover his story along with him. When he's a toy, you can make up an origin story of your own.

In the film, Snake Eyes is still hurting from the murder of his father and is eager for revenge. What makes him a potential hero is that he's slow to use his formidable skills unless he's attacked.

Anyone who tries soon regrets it. In bare knuckle battles that make UFC look wimpy, he can subdue larger opponents with his agility and quick thinking.

He initially accepts an offer from a gunrunner named Kenta (Takehiro Hira) on the chance that he can punish his dad's killer. Instead, Snake Eyes, who gets his name from how a bad roll of the dice put him where he is, befriends a prominent Japanese official named Tommy (Andrew Koji), who also happens to run a ninja school.

The others are wary of an outsider, even though he saved Tommy's life. In addition, Snake Eyes discovers that doing the right thing means doing something other than following someone blindly.

You don't need David Mamet-esque characterizations to make a good martial arts movie, so a routine setup like this has potential. While the stunt work in "Snake Eyes" is impressive, Schwentke does his actors and their doubles a disservice with disorienting, rapid cutting.

If you've seen more than one Jet Li or Jackie Chan movie, you know the camera is usually stationary and only moves to follow the action. The cuts are sparing because the fighting itself looks enthralling. Fred Astaire insisted that his directors shoot him from head to toe in wide and medium angles so that you could see he was really dancing.

The opulent sets are later cluttered with some groan-inducing computer effects that simply aren't as engaging as the vehicle chases. Watching cars and motorcycles tearing through the narrow Japanese streets is infinitely more thrilling than effects that seem to have been left over from "Snakes on a Plane."

The German Schwentke had a chance to make a film worthy of his real American hero, and the British Golding makes a good-faith effort. If only Schwentke had trusted the stunts playing in front of his camera, but as we're aware, knowing is half the battle.