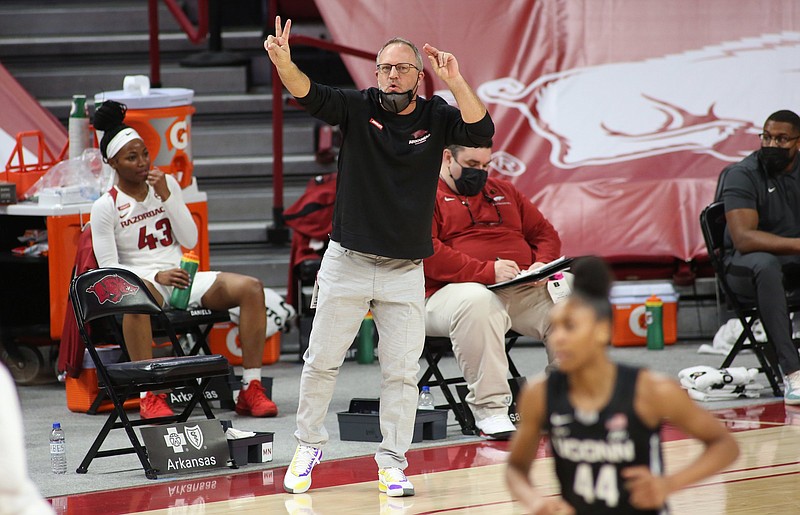 Arkansas women’s basketball Coach Mike Neighbors, shown during last season’s victory over Connecticut, said he quickly agreed to a return road game against the Huskies. “First and foremost, it’s the right thing to do for our team and for the integrity of the game,” he said. (NWA Democrat-Gazette/David Gottschalk)

University of Arkansas women's basketball Coach Mike Neighbors told recruits over and over they will face big-time competition if they come to Fayetteville.

Neighbors is true to his word as the Razorbacks will face 11-time national champion Connecticut on the road Nov. 14., the school announced on Friday.

The Razorbacks knocked off the Huskies in Walton Arena in Fayetteville last season, arguably the top regular-season win in school history. That game was put together on the fly as both teams had holes in their schedule because of covid-19 issues. The win was one of several big moments for the Razorbacks last season.

The game time, specific location and television information will be announced at a later date. UConn, with former Central Arkansas Christian star Christyn Williams entering her senior season, plays most of their home games at Gampel Pavilion in Storrs, Conn., but also plays games at the XL Center in Hartford, Conn.

The Razorbacks' roster will be different for the upcoming season with just one senior, guard Amber Ramirez, but that didn't deter Neighbors.

"The second quote is 'You're never gonna kill a dragon if you're afraid to go hunting where they live.' So go play UConn at UConn. I know it's daunting. But I think everybody thought we were crazy when we tried to play'em at home last year. Our kids deserve that. It's what we promised them when they committed and signed here that we're gonna get you in big games that everybody around the country is gonna be interested in."

Neighbors, who recently finalized an agreement that could keep him as the Razorbacks coach through the 2028 season, guided his team to back-to-back winning seasons in the SEC for the first time in school history. The wins over UConn and Baylor last season were also the first over two top-five teams in the same season.

Neighbors is hopeful of learning something about his team with a stout early season test.

"Playing under 11 national championship banners, it's gonna be hard," Neighbors said. "We're gonna have to do a lot of hard things to be a good team next year. Let's go see what it looks like early and find out.

"This is one opportunity you have as a coach to set the example of 'Yeah, we're willing to do hard things, too.' I know we'll be a drastic underdog, especially coming off last year's game. The score's gonna start 0-0. It's two new teams but I understand all that and I think our kids do, too. First and foremost, it's the right thing to do for our team and for the integrity of the game. If they come here, we should go there."

Neighbors said the full schedule should be finished soon, but acknowledged there won't be a marquee name coming to Bud Walton Arena this season during nonconference play.

"After last year, it became very, very difficult to get a home game," Neighbors said. "We're gonna have some really good ones, but none of that magnitude. Even with the number of people we were graduating, we had a really hard time talking anybody into coming is a good way to put it."