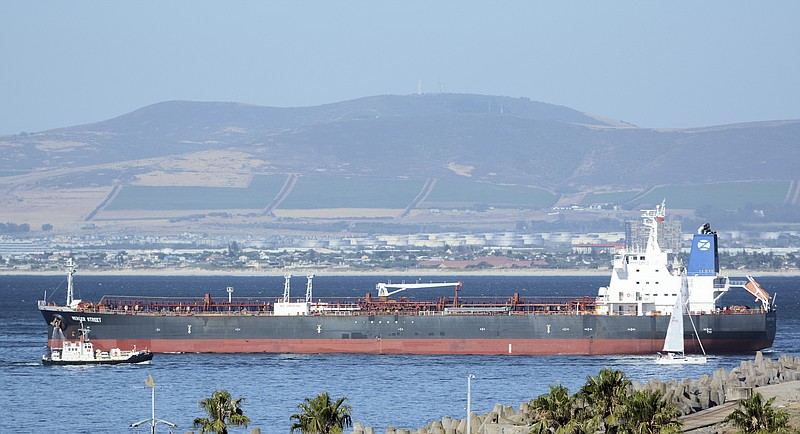 This Jan. 2, 2016 photo shows the Liberian-flagged oil tanker Mercer Street off Cape Town, South Africa. The oil tanker linked to an Israeli billionaire reportedly came under attack off the coast of Oman in the Arabian Sea, authorities said Friday, July 30, 2021, as details about the incident remained few. (Johan Victor via AP)

DUBAI, United Arab Emirates -- An attack on an oil tanker linked to an Israeli billionaire killed two crew members off Oman in the Arabian Sea, authorities said Friday, marking the first fatalities after years of assaults targeting shipping in the region.

No one immediately claimed responsibility for the Thursday night strike on the Liberian-flagged tanker Mercer Street. However, a U.S. official said it appears a so-called suicide drone was used in the attack, raising the possibility that a government or a militia group was behind it. Without providing evidence, Israeli officials alleged that Iran carried out the attack.

The U.S. Navy rushed to the scene and was escorting the tanker to a safe harbor, a London ship management company said Friday.

The assault represented the worst-known maritime violence so far in regional attacks on shipping since 2019. The U.S., Israel and others have blamed the attacks on Iran as Tehran's nuclear deal with world powers unravels. Iran now appears poised to take an even tougher approach with the West as the country prepares to inaugurate a hard-line protege of Supreme Leader Ayatollah Ali Khamenei as president next week.

The attack Thursday night targeted the tanker just northeast of the Omani island of Masirah, more than 185 miles southeast of Oman's capital, Muscat.

Zodiac Maritime in London, part of Israeli billionaire Eyal Ofer's Zodiac Group, said the attack killed two crew members, one from the United Kingdom and the other from Romania. It did not name them, nor did it describe what happened in the assault. It said it believed no other crew members on board were harmed.

The U.K. government later confirmed that a British citizen "has died following an incident on a tanker off the coast of Oman."

The statement from Zodiac Maritime said that "at the time of the incident the vessel was in the northern Indian Ocean, traveling from Dar es Salaam to Fujairah with no cargo onboard," naming ports in Tanzania and the United Arab Emirates.

Satellite tracking data from MarineTraffic.com showed the vessel had been near where British officials said the attack occurred. However, the the ship sent it last signal early Friday.

Late Friday, Zodiac Maritime said the tanker was sailing under the control of its crew "to a safe location with a U.S. naval escort." The company did not elaborate. The U.S. Navy's 5th Fleet, which patrols the Mideast, did not respond to a request for comment.

The British military's United Kingdom Maritime Trade Operations said an investigation was underway into the attack and that coalition forces were taking part.

A U.S. official, speaking on condition of anonymity to discuss the investigation, said the attack appeared to have been carried out by a "one-way" drone and that other drones took part. The official said it wasn't immediately known who was behind the attack and declined to elaborate.

Israeli officials, who similarly spoke on condition of anonymity as they weren't authorized to talk to the media, blamed Tehran for the attack, adding that Israel's "campaign against [Iran] will continue."

Israel considers Iran to be its biggest threat, citing Tehran's hostile rhetoric, support for anti-Israeli militant groups and growing influence in the region.

The remarks were made after an earlier report from private maritime intelligence firm Dryad Global referred to a drone sighting involving the vessel before the attack. Iran and Yemen's Tehran-backed Houthi rebels have in the past employed suicide drones -- unmanned aircraft loaded with explosives that detonate on impact with a target.

Information for this article was contributed by Robert Burns, Matthew Lee, Edith M. Lederer, Isabel DeBre and Joseph Federman of The Associated Press. 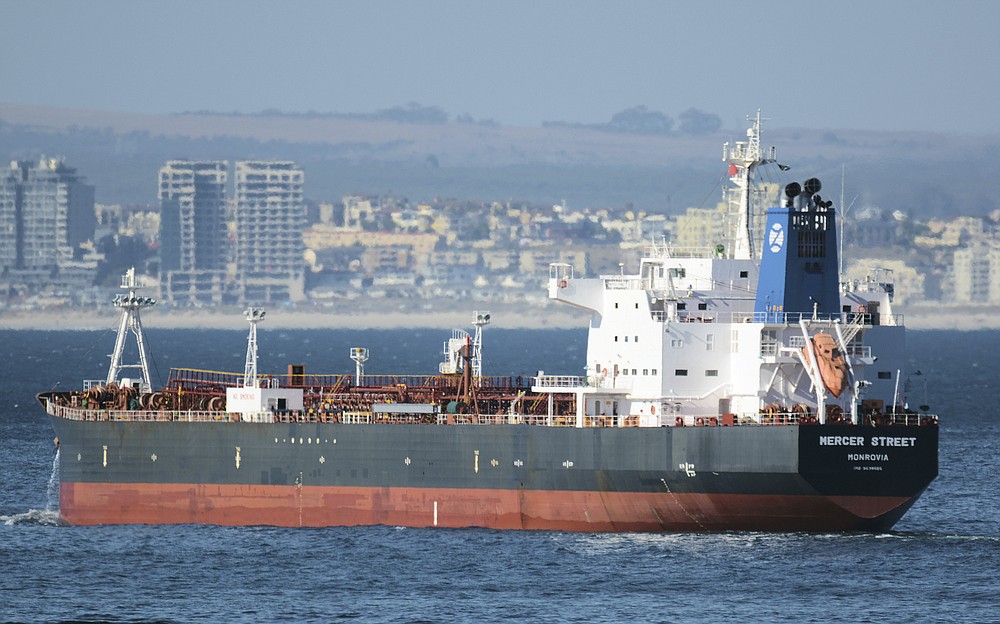 This Jan. 2, 2016 photo shows the Liberian-flagged oil tanker Mercer Street off Cape Town, South Africa. The oil tanker linked to an Israeli billionaire reportedly came under attack off the coast of Oman in the Arabian Sea, authorities said Friday, July 30, 2021, as details about the incident remained few. (Johan Victor via AP)