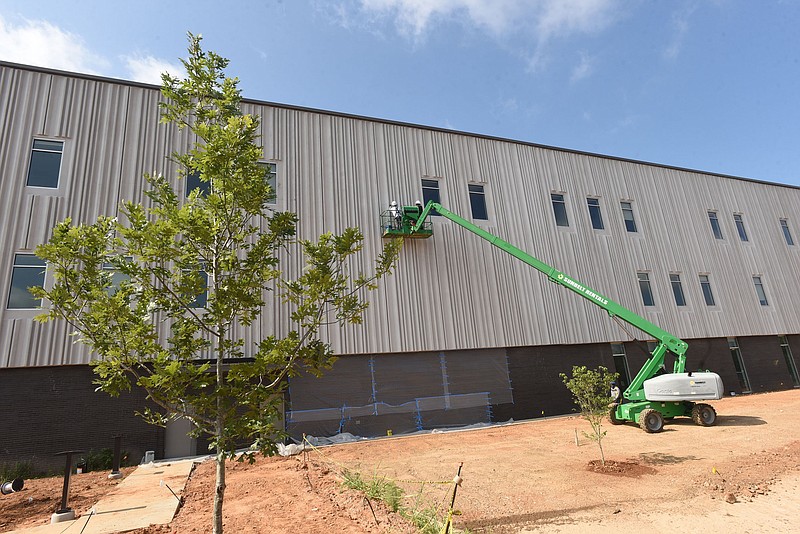 SPRINGDALE -- City officials have touted the Municipal Campus now under construction as an improvement for customer service over the current City Administration Building. But it's also a safe haven for city employees.

District Judge Jeff Harper will begin hearing cases from his new courtroom Monday. The council's committee of the whole meets Monday evening in the tiered auditorium on the second floor, and the Planning Commission on Tuesday.

Contractors on Friday were working feverishly in the courtroom to connect the computer system, the sound system and screw in the last few screws.

Springdale voters in 2018 approved a $200,000 bond issue, which provided $38 million for the new building. The city has added about $2 million in earned interest, money from other sources and the city's general fund for a construction budget of almost $42 million, said Wyman Morgan, the city's director of administration and finance.

Phase one of the campus -- the court building and police department -- mostly are completed, noted Greg Ferus, the senior project manager for Milestone Construction.

Ferus and Police Chief Mike Peters spent the tour determining which doors are open to them and which ones should be locked, which ones need a key card and which of those cards are operating.

Workers will start asbestos abatement on the current City Administration Building on Monday, before tearing it down to the steel supports, Ferus said. Completion is expected in about a year for the second phase of construction.

City staff has outgrown the current administration building, which was built in 1960 and expanded in 1995, Sprouse said.

Court clerks, the judge, police dispatchers and detectives were the only city employees working from the new space Friday.

"We won't be 100% done," Harper said of his court. "But I think we've got some improvisations in place that we'll be able to make it work."

State of the art

The security measures in the new building are state of the art, with cameras, monitors, alarms and key card access for employees.

Public access to the building will be limited, with only one door for entrance. Public safety officers and metal detectors will be the first point of contact in the lobby.

City employees of the District Court and the Police Department will greet residents from teller-style windows in the lobby. The public can make court payments or police reports from there, Peters said. A private room with its own teller-style window also is available for more sensitive situations.

The security equipment might be new, but the security measures aren't, Peters said.

He noted the police report specialists worked from behind teller-style windows and ballistic glass in the old building. Visitors to court had to pass through metal detectors.

And most corporations today place some kind of barrier between their employees and the public, he said.

"We had all that before," Peters said of the limited access. "This time we had the opportunity to do it right."

Peters noted Duvall Decker architecture firm, who designed the building, brought in an architect who specialized in building police departments.

"He's built about 300," Peters said. "He suggested things we'd never even thought of."

Sprouse insisted the public will not be limited by the security. The design of the building -- at its completion -- will make city employees and officials more accessible, he said.

Many people coming to the city offices need only the police and court specialists who will greet them first. When the entire building is complete, the city's offices will be housed near each other, so residents can access all they need under one roof, Sprouse said.

"They can come to the business office, the planning office, the building office without having to go to another building down the street," he said.

And the court and police department do require an extra level of security. "Security is just a reality in today's world," Sprouse said.

But the favorite feature of the new place might be the elbow room.

Court clerks are housed two to an office that someday will house the city attorney and his staff. But the clerks report they have much more room than they did in the old building. They worked Friday to prepare for Monday's session, with a stack of traffic tickets on one desk and police "mug shots" on another.

The courtroom will hold about 160 people, compared to 120 in the last, Harper said. But access will remain limited under covid-19 restrictions put in place by the Supreme Court.

Harper said prosecutors, defendants and their attorneys and court interpreters all will enjoy more space in the new courtroom.

Rooms adjacent to the courtroom will provide lawyers and clients privacy for consultations. The courtroom lobby was the setting for many such meetings in the old building. And a room holding criminal defendants for arraignment features a deep cut window frame, keeping faces hidden from all but court officials.

And the outer lobby of the court will feature an automatic teller machine.

The Police Department comprises most of the new municipal building.

Officers on Friday were already making use of a new gym and locker rooms.

A few detectives had added personal touches to their cubicles.

And four 911 dispatchers were busy on calls during the council's tour.

Dispatch was the first department moved to its new space, Peters said. The city's Information Systems department moved four of the eight dispatch stations and got dispatchers operating in the new center, while keeping the other half fully operating. Peters and Ferus said a number of vendors who provided various aspects of the dispatch and radio system have been at the building nearly full time this week.

Dispatchers now have a break room, a quiet room to recover from tough calls, an outdoor balcony, space for about four more dispatch stations and a skylight to add light. The room must be kept mostly in the dark to ensure full vision on each of the station's seven monitors.

The police evidence is no longer in a trailer out back. It will move from an old garage building, Peters said.

Officers will log evidence and place it in lockers, which they cannot reopen. Evidence technicians will retrieve the evidence from the other side of the lockers and begin their work to log, test and store it. The evidence room includes six floor-to-ceiling rolling files. Drugs logged in as evidence through the lockers are moved to another room and then placed in a locked cabinet.

"The building security has a lot of redundancies," Peters said.

A single door facing Huntsville Avenue will allow the public to enter the building to retrieve evidence or someone who has been detained.

The police department includes state-of-the-art roll call and conference rooms that can accommodate officers from other departments, a backup system for dispatch, juvenile and adult holding cells and even a room with a dog wash for the department's canines.