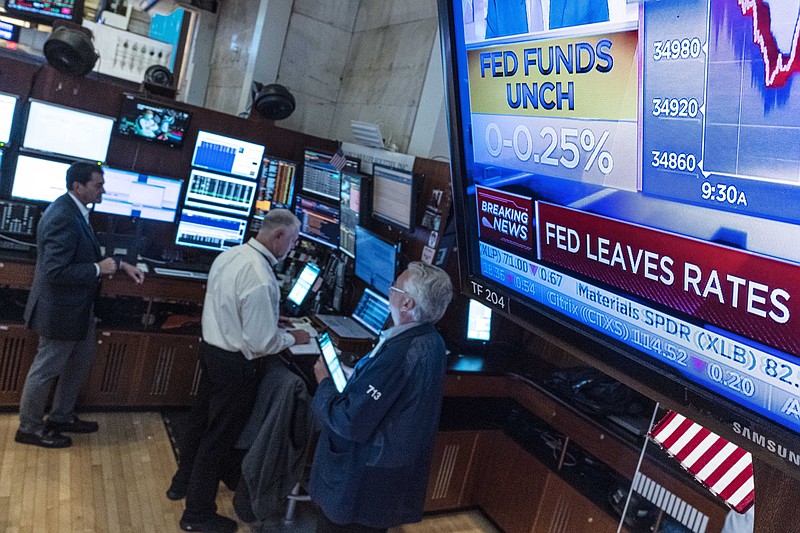 A screen in a booth on the floor of the New York Stock Exchange shows Wednesday’s interest-rate decision by the Federal Reserve. Inflation is rising faster than predicted by some policymakers, a sign of the bumpiness of the economic recovery. (AP/Richard Drew)

WASHINGTON -- Prices rose 4% in June compared with a year ago, as inflation continues to fuel debate in Washington over the strength and stamina of the economic recovery in the near and long term.

Data released Friday by the Bureau of Economic Analysis showed that prices rose 0.5% in the past month.

The gains in the Personal Consumption Expenditures inflation index were the fastest since 2008, but in line with economists' expectations. That rapid pace is not expected to last -- and how much and how quickly it will fade is the economic question of the moment.

Economists knew prices would post strong increases as they were measured against weak figures from 2020, when costs for many common purchases slumped. But the jump in recent months has been more intense than most were expecting.

That is partly because supply bottlenecks have emerged across America's reopening economy. Computer-chip shortages pushed up the prices of electronics and delayed automobile production, causing used-car prices to surge as people scrambled to find vehicles. Employers are struggling to hire back workers fast enough to meet returning demand, and wages and prices at restaurants and some other service providers have begun to move higher.

Policymakers at the Federal Reserve and Biden administration continue to say that as supply chains have time to clear, and pent-up consumer demand eases, prices for used cars or airline tickets will come back down.

Yet inflation is climbing faster than some policymakers have predicted, reflecting the bumpiness of the economic recovery. Republicans and some prominent economists say the price increases already are too high for comfort, and that the Fed will be too late once it decides to rein in inflation by raising interest rates.

Some businesses already are feeling strained. On Friday, Procter & Gamble Co. predicted slower sales and historically high prices for materials and transportation, in large part because of inflation and the ongoing pandemic. In an interview with The Wall Street Journal, chief executive David Taylor said "commodities and cost pressure have escalated significantly."

The latest inflation data adds to understandings of how the economy is emerging from the pandemic recession. By many measures, things are moving in the right direction. The U.S. economy grew at an annual rate of 6.5% between April and June, marking a full recovery from the pandemic.

But there is still a long way to go. Some 6.8 million jobs are still missing after the pandemic crisis. Even at a rapid pace of job growth -- in June the economy gained 850,000 jobs -- a jobs recovery would not arrive until early next year, or beyond, after accounting for population growth.

It will matter for workers how quickly today's robust price gains fade. Higher prices are taking a bite out of workers' paychecks. Income after taxes fell 0.5% in June, accounting for the impact of inflation. Over the past year, inflation has more than offset a modest rise in after-tax income.

The data released Friday showed that core inflation, which strips out volatile food and fuel prices and can give a cleaner reading on price trends, picked up by 3.5% in June from a year earlier, for the highest annual reading in 30 years.

At a news conference Wednesday, Fed Chairman Jerome Powell said that as temporary supply-chain issues abate, inflation will fall closer to the Fed's 2% annual target. But the Fed is watching closely to see which sectors continue to see prices climb, and if people'' expectations around inflation morph over time, too.

"To the extent people are implementing price increases because raw materials are going up or labor costs or something's going up, you know, the question really for inflation really is, does that mean they're going to go up the next year by the same amount?" Powell said.

The Fed is willing to look through inflation it expects to be temporary, but it would be concerned if it saw rapid price gains turning into a stickier situation. Officials are especially watching trends like rising wages for a sense of whether price gains will last.

Wages and salaries rose 1% in the second quarter, slightly slower than in the first three months of the year, according to separate data released Friday by the Labor Department. But pay is rising rapidly in some industries that are reopening as the pandemic ebbs: Wages in the leisure and hospitality sector rose 2.8% in the second quarter, and are more than 6% over the past year.

Should pay increases turn into a cycle -- one in which workers regularly ask for more money to cover rising costs, and employers give raises but pass the expense on -- it could make for persistent inflation down the road. Fed officials generally do not think that is happening right now.

"There is a form of wage inflation that can lead to price inflation, and we're not seeing that right now," Powell said Wednesday.

Information for this article was contributed by Rachel Siegel of The Washington Post and by Jeanna Smialek and Ben Casselman of The New York Times.