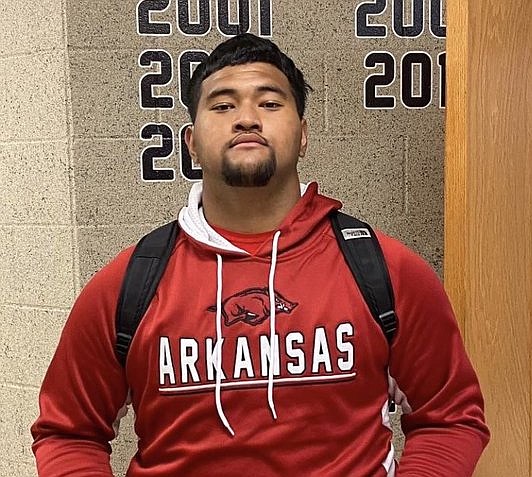 Less than one month since moving to Northwest Arkansas, junior offensive lineman Joey Su’a has landed a scholarship offer from Arkansas after attending the Razorbacks’ cookout on Saturday.

“We were having a meeting and he gave me a scholarship,” Su’a said. “I didn’t hear at first, but when he said it again I was happy.”

Su’a, 6-4, 319 pounds, of Bentonville, arrived in Arkansas on July 11 from California after his mother transferred to work in logistics in Walmart’s E-commerce division. He started as a freshman and sophomore for Adelanto High School.

He previously had offers from Georgia, Michigan State, Maryland, Fresno State, BYU and other programs. He along with about 20 other prospects and Arkansas commitments had dinner in Reynolds Razorback Stadium.

Su’a, who visited with his family, said seeing the stadium was the highlight of the visit.

“It was nice. I like how the whole crowd is right there (on you),” he said.

His cousin, Damien Mama, was a three-year starter for Southern Cal as an offensive guard. His mother’s cousin, JuJu Smith-Schuster, is a receiver for the Pittsburgh Steelers.

Su’a and his mother were able to drive to Fayetteville and saw Donald W. Reynolds Razorback Stadium shortly after arriving in Fayetteville. He felt a good connection with Kennedy.