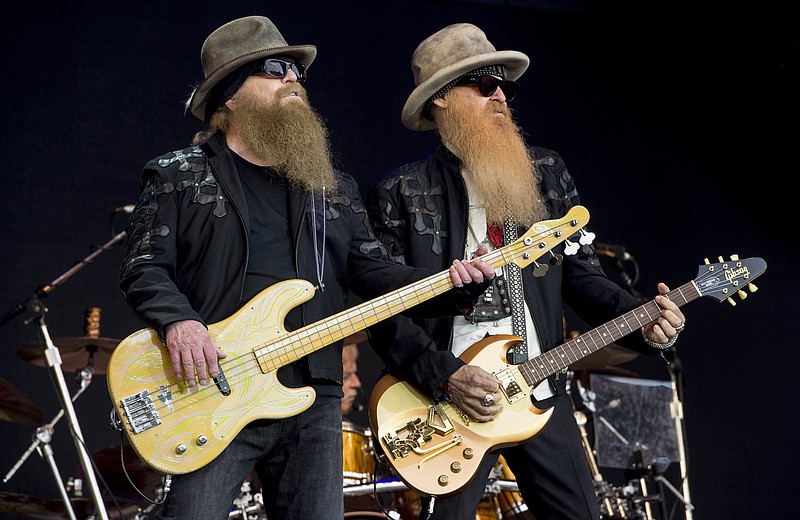 FILE - Dusty Hill, left, and Billy Gibbons from U.S rock band ZZ Top perform at the Glastonbury music festival in Somerset, England, June 24, 2016. ZZ Top has announced that Hill, one of the Texas blues trio's bearded figures and bassist, has died at his Houston home. He was 72. In a Facebook post, bandmates Billy Gibbons and Frank Beard revealed Wednesday, July 29, 2021, that Hill had died in his sleep. (Photo by Jonathan Short/Invision/AP, File)

Tuesday's ZZ Top concert at Little Rock First Security Amphitheater has officially been canceled in the wake of the death of bass player Dusty Hill on Wednesday.

The band's longtime guitar tech, Elwood Francis, had been filling in for Hill on the band's tour on bass, slide guitar and harmonica since July 21. It is the only cancellation the band has announced and it's because the concert conflicted with a memorial service for Hill.

"We were very much looking forward to an amazing night of music with ZZ Top next week, but given the passing of Dusty Hill we understand the need to cancel this show," said Curtis Pinkerton, director of marketing for River Concerts.

"We join the millions of fans around the world in mourning the passing of Dusty. Our continued thoughts and prayers are with his family and friends during this difficult time," the band said in an official statement released Friday.

"While ZZ Top is committed to continuing its current tour and, thus, honoring the late Dusty Hill's wish that the band carry on in his absence, one date will be affected by his passing," the statement read.

"The show that had been scheduled for Tuesday, August 3, at First Security Amphitheater in Little Rock, AR has been cancelled as it conflicts with a memorial service for Dusty that band members and crew are committed to attending that day," the statement continued.

A spokesman for promoter River Concerts said ticketholders will automatically receive a refund via their original form of purchase.