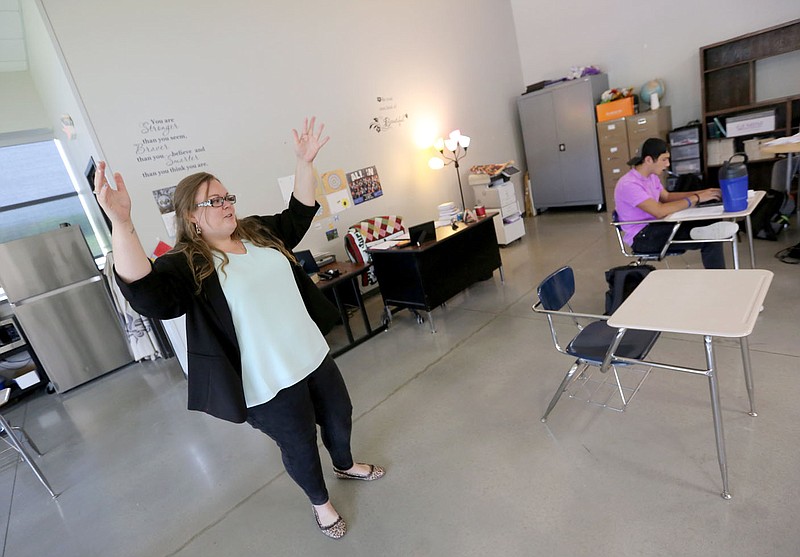 Katie Kunz stands in the room at Elkins High School Monday, May 17, 2021, and describes the advantage of larger space for a computer science room and makers space. Elkins High School and Elkins Middle School will be partnering with Amazon in the years ahead to enhance the district's computer science program. The high school will be renovating a classroom this summer in order to create a state-of-the-art maker space for computer science and robotics for students next year. Check out nwadg.com/photos for a photo gallery. (NWA Democrat-Gazette/David Gottschalk)

ELKINS -- The School District is increasing its emphasis on computer science by expanding its participation in the Amazon Future Engineer program and improving district resources, administrators said.

"I feel excited," said ninth-grader Kyle King, 15, of Goshen. "There's going to be so many more opportunities where I can learn different things and get more fluid in programming, coding, building drones and just building things in general."

The district learned about the program through an email from Amazon, she said.

"The application process included a form to fill out about our school district demographics, computer science programs we offered and short essays asking why we were applying," Kunz said. "After passing the first portion of the application, we had a phone interview with an Amazon representative asking more in-depth questions about our school and program."

The program, launched in 2018, is a childhood-to-career program that serves 10 million youth from underrepresented and underserved communities for computer science careers, according to Amazon. The program offers schools free introductory and Advanced Placement computer science curriculum, limited in-person instruction and educational videos on topics such as coding, robotics and drones.

About 48% of Elkins' about 1,200 students were eligible for free or reduced lunch during the 2019-20 school year, a common gauge of poverty in school districts. This year the U.S. Department of Agriculture reimbursed schools for free meals to all students regardless of income, a practice that will continue next school year.

The Rogers, Fayetteville and Springdale districts don't participate in the Future Engineer program, according to administrators. West High School is the only participating school in Bentonville, administrators said.

Amazon did not reply to requests for information on the scope of its program in Arkansas.

Elkins' initial success with the program for its almost 400 high school students has contributed to converting the school's Alternative Learning Environment room into a computer science classroom at Elkins High, Kunz said. The alternative learning program will be relocated to another classroom, she said.

The new space will increase the computer science classroom from 850 square feet to more than 1,100, she said.

The new room will also have modern furniture, a dedicated space for 3D printing and soldering, laptops, robotics kits, new software and a circular LCD screen that hangs from the ceiling to allow students to share information in real time, administrators said.

The School Board unanimously approved buying $50,000 in equipment for the space May 17, said Jeremy Mangrum, superintendent. While that purchase is district funded, the curriculum provided by Amazon is valued at $2,500, Kunz said.

The district is likewise expanding the program's curriculum to Elkins Middle School's more than 300 students in the fall, Kunz said.

"Using the Amazon resources really allows us to provide those middle schoolers with some baseline so that when they get here we can really advance them on," she said.

Carson Eaton, 16, a junior from West Fork, said he would've benefited from having the same opportunity when he attended the middle school.

"We didn't have very many extracurricular classes down there," Eaton said. "Seeing that there are going to be kids who are going to be getting these opportunities, it really makes me excited to see the future for Elkins."

The future is precisely what the district is considering by increasing its focus on computer science, Mangrum said.

"We know that there is great demand in Northwest Arkansas for students that are trained and have a background in these fields," he said. "Some of our students that might be ready to go straight into the workforce out of high school could go to work for some of the corporations up here in these fields and have high-yield careers."

There were 3,463 job postings for computer science and information technology positions in Northwest Arkansas for the 90-day period that ended Tuesday, said Joe Rollins, Northwest Arkansas Council director of workforce development. The greatest number of openings were for software developers and software assurance analysts and testers, with a median wage of $105,600 per year.

The state launched the initiative in 2015 with the passage of Act 187, which required every high school to offer at least one computer science course, Owen said. The initiative now includes 55 state-developed courses on topics such as programming, networking, computer engineering, cybersecurity, artificial intelligence and video game design and development.

"It's an education initiative," Owen said. "Our students are going to have to have these skills to fill the jobs that are coming once they enter the workforce."

About 1,100 state students were taking some type of computer science class prior to the initiative; that number grew to some 10,400 students this year, Owen said.

Tahlia Bergeron, 18, a senior from Fayetteville, said she'll be attending the University of Arkansas-Fort Smith this fall to major in computer science and minor in math.

"I'm also interested in web design and software development," Bergeron said. "It's such a diverse field, that I might just try to do all of it."

There were no computer science classes offered at Elkins High when she started attending the school as a freshman, she said, noting the resources being developed now would've been beneficial to her education.

"Computer science is just going into everything, so giving the kids the basic skills, giving them some experience with all these different fields will just open up the doors for them," Kunz said. "I want to open up as many doors as possible." 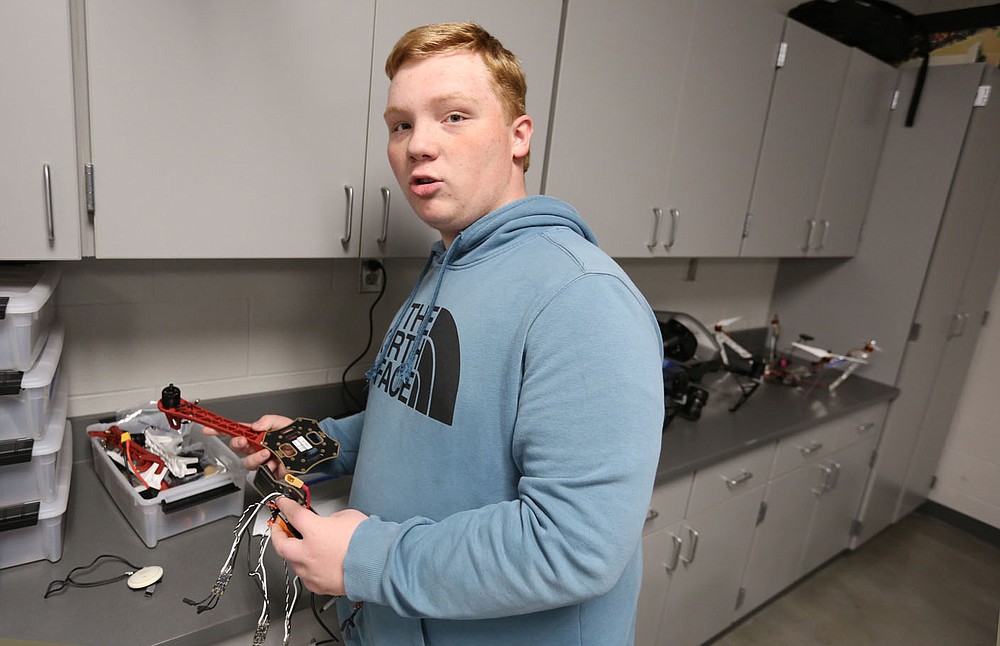 Kyle King, a ninth grade student at Elkins High School, displays Monday, May 17, 2021, a wiring harness, in the former computer lab classroom at the high school. Elkins High School and Elkins Middle School will be partnering with Amazon in the years ahead to enhance the district's computer science program. The high school will be renovating a classroom this summer in order to create a state-of-the-art maker space for computer science and robotics for students next year. Check out nwadg.com/photos for a photo gallery. (NWA Democrat-Gazette/David Gottschalk)
More News

Information on the Amazon Future Engineer program is available at https://www.amazonfutureengineer.com/ .