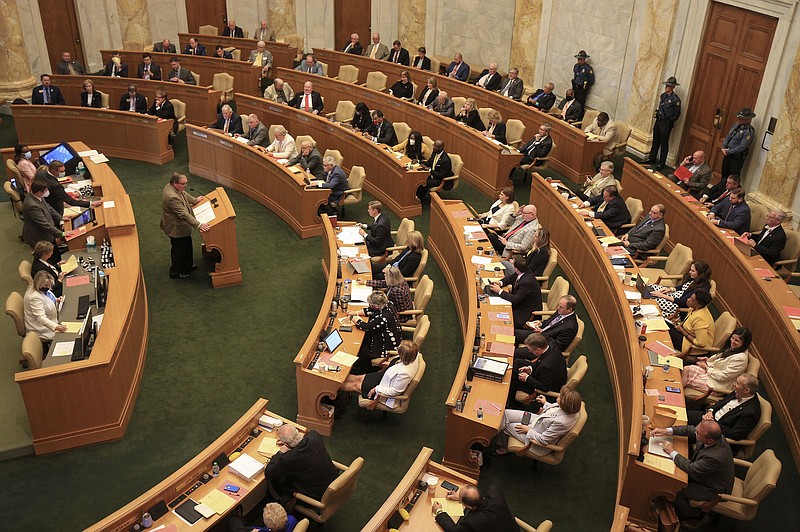 But where are those billions of dollars set to go? Here are five charts to help explain, using data from the general revenue forecast by the state Department of Finance and Administration.

If you have questions about the state budget or anything shown on the charts, please fill out the form at the bottom of this page and we may answer your questions in a follow up article.

The state budget is divided by the state into seven major categories. The category receiving the greatest amount of money is the public school fund. The vast majority of that money goes to the Division of Elementary and Secondary Education.

The second largest category by funding is the Department of Human Service, which covers multiple programs, including Child and Family Services. A large portion of the DHS funds also goes to grants.

The third largest category is for higher-education institutions, which, as the name implies, funds colleges, universities and technical schools in the state.

The two correctional divisions combined account for more than 70% of the state government general fund category.

Miscellaneous agencies were not specified by the state in its budget materials.

The fifth-largest funding category in the state budget is labeled by the state as “other.”

Scott Hardin, spokesman for the Department of Finance and Administration, said the Health Department is in this category rather than the state government general fund because the public health fund was established by a separate state statute.

Although budgets generally grow each year, the rate of increase is not the same for every division, agency and program.

The Department of Labor and Licensing, which oversees state labor laws and the licensing of some professionals, saw the greatest percent increase in its budget compared to fiscal year 2021, at about 23%, followed by the Department of the Military, which supports the Arkansas National Guard, at about 21%.

Hardin said these budgets grew so much in part because the agencies requested that funding cut last fiscal year for projects considered not essential to day-to-day operations be restored.

The Department of Labor and Licensing had also requested additional funding to help support funding shortfalls within the department, Hardin said.

Hardin said the Department of the Military also requested additional funding for IT-related needs and because the department has a dwindling fund balance in the Special Military fund, which was previously funded by federal reimbursements that are no longer available.

Among entities with the smallest percent increase in budget compared to fiscal year 2021 were several programs within the Division of Workforce Services: the Office of Skills Development, the Temporary Assistance for Needy Families program and the Adult Education program.

The Public School fund also saw one of the smallest percent increases in budget compared to the 2021 budget.