TELEVISION: 'Friends' not PC but has good moments 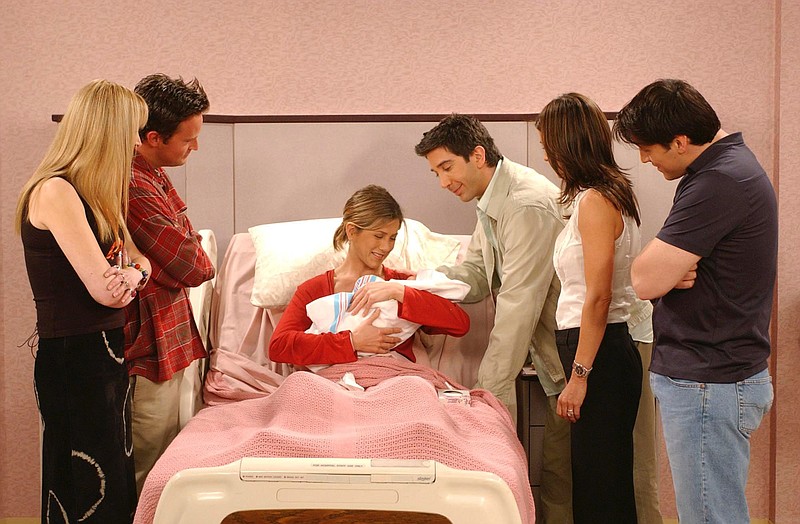 In the opening moments of a 2000 episode of "Friends," Monica is trying to convince the gang that she doesn't have the flu when there's a knock on the apartment door. The six characters react as if Central Perk just ran out of coffee. Who dares to intrude on their exclusive club?

The moment probably didn't make the highlight reel during "Friends: The Reunion," which started streaming Thursday on HBO Max, but it's one of the most telling bits in the sitcom's 10-year run.

The show may be one of the most beloved in TV history, inspiring everything from haircuts to bad pickup lines. But the vast majority of viewers were never really welcomed to be part of its world.

Visitor passes were only allotted to the drop-dead gorgeous.

The disdain for mere mortals was overlooked during the show's initial run, largely because younger viewers were thrilled to be finally represented in a landscape previously dominated by the grown-ups of "Home Improvement," "Murphy Brown" and "Golden Girls."

The casting was impeccable. David Schwimmer, who played sad sack Ross, tackled physical comedy like he was paying homage to the great silent-film stars; Lisa Kudrow, as Phoebe, upgraded the reputation of the space cadet; Jennifer Aniston's Rachel had the comic timing of an "SNL" standout; Matt LeBlanc as Joey managed to make a skirt chaser lovable; Matthew Perry's Chandler was a well-oiled sarcasm machine; and Courteney Cox, who played Monica, burst with manic energy.

I still roar at some classic moments, like when Monica gets carried away explaining a woman's erogenous zones or Rachel accidentally adds beef to her English trifle. The six cast members play off one another like Monty Python at its peak.

But too many bits no longer seem so funny.

Hardly an episode goes by without a dig at overweight people, a running joke that forced Cox to keep crawling into a fat suit for flashback scenes.

Gay people were only represented by Ross' ex-wife and Joey's obsession with watching hot women make out with each other. Strangers assuming Chandler was gay was a common punchline.

Aside from Ross' dating pool, minorities were practically nonexistent. Even the extras in the New York settings were largely white.

This wasn't the only '90s sitcom to ignore diversity. "Cheers" and "Seinfeld" were just as guilty. But "Friends" was supposed to represent a new "woke" generation. When it came to that mission, the creators blew it.

Go ahead and fall in love with the characters all over again. Just don't expect them to love you back. To them, we were all just a mass of Ugly Naked Guys.

The best way to appreciate the Emmy-winning series is by rewatching entire episodes. Here are the top five:

"The One Where Ross Finds Out" (season two): Romantics still swoon over the memory of Ross and Rachel sharing their first passionate kiss in the rain. But the real moment to cherish is the scene in which Rachel gets sloppy drunk at a fancy restaurant and decides to leave a game-changing phone message. You can almost see Hollywood executives line up in the background, waiting to anoint Jennifer Aniston as the next rom-com queen. Memorable line: "You're over me? When were you under me?"

"The One With the Prom Video" (season two): By this time in the series' run, the writers weren't shy about getting sentimental. That's evident in the B-story line in which Chandler wears Joey's gift, a clunky bracelet, despite the fact that it's a "woman repeller." But the tissues really come in handy in the final moments, when a long-lost videocassette reveals the sacrifice Ross was willing to make for Rachel before a high school dance. Memorable line: "She's your lobster!"

"The One With the Jellyfish" (season four): Ross and Rachel again — but this time, the two don't end up in each other's arms. Their fight-of-all-fights squares off nicely with Monica recalling her misadventure with a jellyfish as if she were Robert Shaw in "Jaws." The MVP award goes to the genius who came up with idea of casting Teri Garr as Phoebe's mother. Memorable line: "And, hey. Just so you know. It's not that common. It doesn't happen to every guy. And it is a big deal!"

"The One With the Embryos" (season four): The trivia contest in which Chandler and Joey win Monica's apartment may be the hands-down funniest scene in the show's history, but don't forget Phoebe's story line in which she hopes to become a surrogate mother. The touching scene in which she gives her embryos a pep talk is a big reason Lisa Kudrow would win an Emmy later in the year. Memorable line: "What is Chandler Bing's job?"

"The One Where Everybody Finds Out" (season five): They may be best buds, but they sure spend a lot of time giving one another a hard time. Their naughty side is on full display when the revelation of Chandler and Monica's relationship triggers a series of pranks that show off Monica's competitive spirit and Phoebe's sultry side, leading to a dance 10 times more enticing than any action in a gentlemen's club. Memorable line: "I'm very happy we're going to have all the sex."

At least 10 Oscar winners would end up guest starring on "Friends," including Robin Williams and George Clooney. But those appearances wound up being nothing more than fleeting cameos. Here are five major stars who did a full week's work and left the greatest impressions.

Julia Roberts, "The One After the Super Bowl" (season two): This one-hour extravaganza features a slew of big-name celebrities, including Jean-Claude Van Damme, Brooke Shields, Fred Willard, Chris Isaak and Marcel the Monkey. But Roberts stole the show as a movie makeup artist who gets revenge on Chandler for a prank he played in grade school. No one has ever uttered the word "underpants" with more aplomb.

Reese Witherspoon, "The One With Rachel's Sister" (season six): Before Witherspoon and Jennifer Aniston co-starred in "The Morning Show," they played siblings in this two-parter in which they battle for Ross. One year later, Witherspoon would star in "Legally Blonde," leading to the kind of film career everyone had predicted for Aniston.

Winona Ryder, "The One With Rachel's Big Kiss" (season seven): Seven years before Katy Perry scored with "I Kissed a Girl," pop-culture fans were in a tizzy over the on-screen smooch between Aniston and Ryder. The moment wasn't terribly sexy, but the buildup provided plenty of laughs, especially whenever Phoebe teased Rachel about her lack of a wild side. We can only imagine what she thought after seeing "Horrible Bosses."

Brad Pitt, "The One With the Rumor" (season eight): Pitt and Aniston were married in real life when he appeared as a former high school classmate who helped launch a "I Hate Rachel Green Club" and isn't about to revoke his membership. He's meaner than he ever was in "Fight Club."

Danny DeVito, "The One Where the Stripper Cries" (season 10): The writers use up their remaining fat jokes for one of the series' final episodes. But DeVito gets the last laugh, bringing great pathos to his character, an over-the-hill stripper who decides to use Phoebe's bachelorette party as his last hurrah. You'll never listen to "Tainted Love" the same way again.