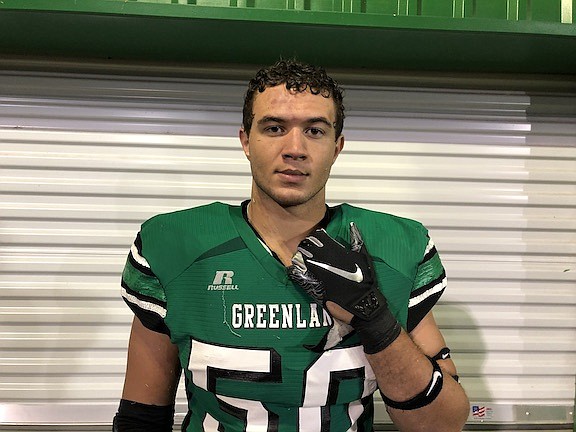 Arkansas commitments JJ Hollingsworth and Dax Courtney were able to visit with the Razorback football staff for the first time while also trying to sway Texas A&M pledge Isaiah Sategna to the Hogs during Tuesday’s visit.

Hollingsworth, 6-5, 250 pounds of Greenland, believes Arkansas has a shot of flipping Sategna.

Arkansas coach Sam Pittman and staff never let up in trying to recruit him.

Because of the Covid-19 pandemic, it was the first time for Hollingsworth and Courtney to meet Sategna. The two future Hogs were trying to flip Sategna but not all the conversation was football related.

“We weren’t necessarily talking all abut football,” Hollingsworth said. “We all kind of have a bond. We’ve talked and been friends for over a year now so we all kind of small talk, too.”

Sategna plans to officially visit College Station this weekend while looking to make other visits.

“We’re going to stay in his ear,” Hollingsworth said. “I think we can get him. I really do. It’s just more less his decision where he’s most comfortable at.”

While recruiting Sategna was a focus for Hollingsworth, being able to meet and get to know Pittman and his staff was also a priority.

“It was my first time meeting any of them,” said Hollingsworth, who was the first Arkansas pledge for the 2022 class in July of last year. “It was pretty emotional getting to meet everybody and just seeing the campus. It was pretty surreal. Everything I saw today was kind of overwhelming.”

He and his parents spoke to Pittman for about 30 minutes in his office.

“Coach Pittman you just can’t say enough about him,” he said. “When you see all these videos and he has all this energy. That’s the same exact kind of energy I got from him.”

“The recruiting staff was really, really, really involved,” Hollingsworth said. “They showed us everything and answered all of our questions.”

“My mom had a few (questions) about graduating early and she wanted to make sure I was on task and Maddie really helped out a lot,” he said. “That kind of eased my mom a lot just knowing you can talk to them.”