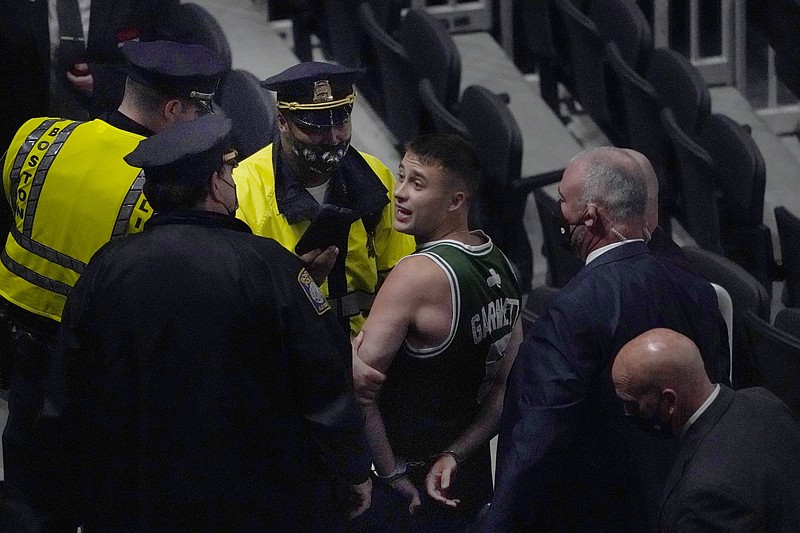 A fan is handcuffed and escorted out of TD Garden by police after allegedly throwing a water bottle at Brooklyn Nets' Kyrie Irving as Irving left the court after Game 4 of an NBA basketball first-round playoff series, Sunday, May 30, 2021, in Boston. The Nets won 141-126. (AP Photo/Elise Amendola)

It goes much deeper than that.

"[It's] just underlying racism, and treating people like they're in a human zoo," Irving said after a water bottle was thrown at him after Brooklyn's 141-126 victory over the Celtics on Sunday night.

"Throwing stuff at people, saying things. There's a certain point where it gets to be too much," said the Nets guard, who spent two years playing in Boston and revealed last week he was the victim of racism during his time in the city. "You see people just feel very entitled out here. As a Black man playing in the NBA, dealing with a lot of this stuff, it's fairly difficult. You never know what's going to happen."

Irving had 39 points and 11 rebounds to quiet the first post-pandemic full house at the TD Garden and lead the Nets to victory in Game 4 of their first-round playoff series. The win gave Brooklyn a 3-1 lead and a chance to clinch at home tonight.

As Irving walked off the court, he was nearly hit by a bottle thrown from the stands. Irving and Nets guard Tyler Johnson turned toward the stands and pointed. Police surrounded a man in a Kevin Garnett jersey in the stands before leading him out in handcuffs.

A spokeswoman for the TD Garden said Boston police officers arrested one person Sunday night "for throwing an object."

"We have zero tolerance for violations of our guest code of conduct," spokeswoman Tricia McCorkle said. "And the guest is subject to a lifetime ban from TD Garden."

The incident mirrored bad behavior at other NBA games in the past week as arenas began lifting capacity limits set during the pandemic.

In Philadelphia, a fan threw popcorn at Wizards star Russell Westbrook; in New York, one spit at Atlanta's Trae Young as he prepared to inbound the ball. They were banned, as were three fans in Utah who Grizzlies guard Ja Morant said "just went too far" with him or his family.

Durant scored 42 points and James Harden added 23 more and a career postseason-high 18 assists to help Brooklyn move within one win of their first playoff series victory since 2014. Jayson Tatum scored 40 points for the Celtics, who were playing at home for the first time since Massachusetts lifted its covid-19 capacity restrictions.

One night after the Boston Bruins beat the New York Islanders 5-2 in front of the largest crowd to see an NHL game since before the pandemic, the Celtics were hoping for a similar boost. And the sellout crowd of 17,226 came ready to let Irving know they hadn't forgotten how he professed his love for the city before opting out of his contract.

They booed every time he touched the ball, showering him and Durant with obscene chants.

That was eclipsed by the postgame incident.

"We know how these people here are in Boston. We know how passionate they are about Kyrie in particular -- they're still upset at him," Durant said. "That's no reason for them to act childish. Glad we got the 'W.' Hopefully, we don't have to come back here this year." 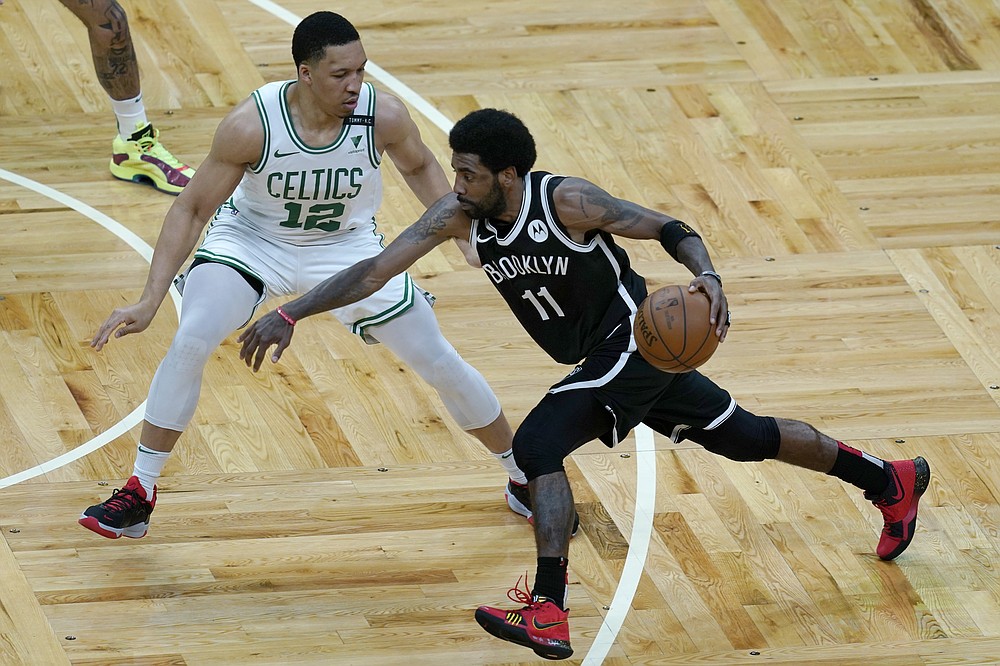 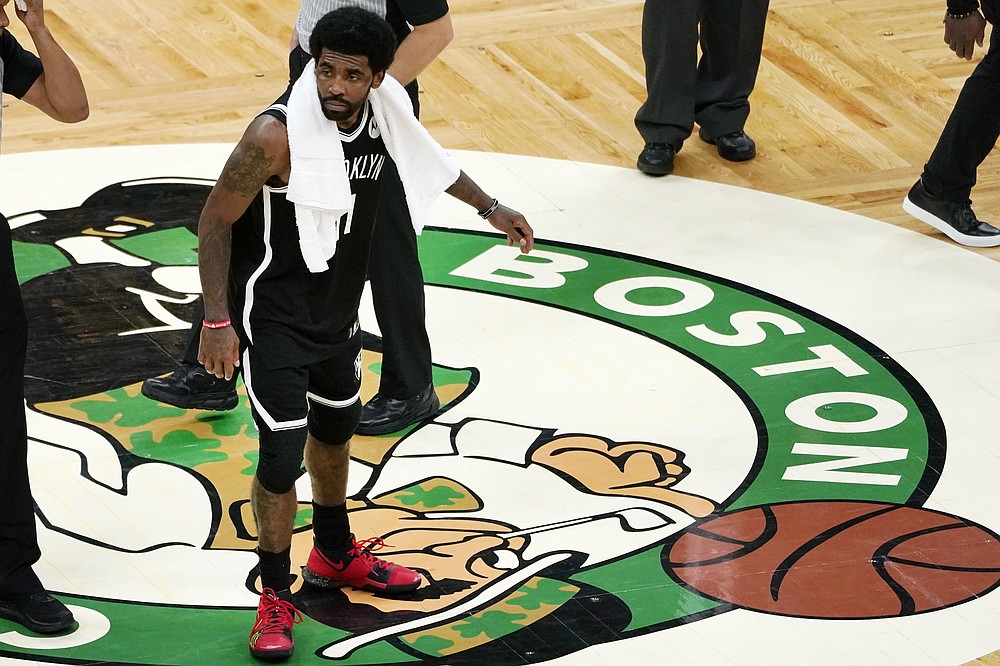 Brooklyn Nets guard Kyrie Irving scrapes his foot on the Boston Celtics logo at mid-court after they defeated the Celtics in Game 4 during an NBA basketball first-round playoff series, Sunday, May 30, 2021, in Boston. (AP Photo/Elise Amendola) 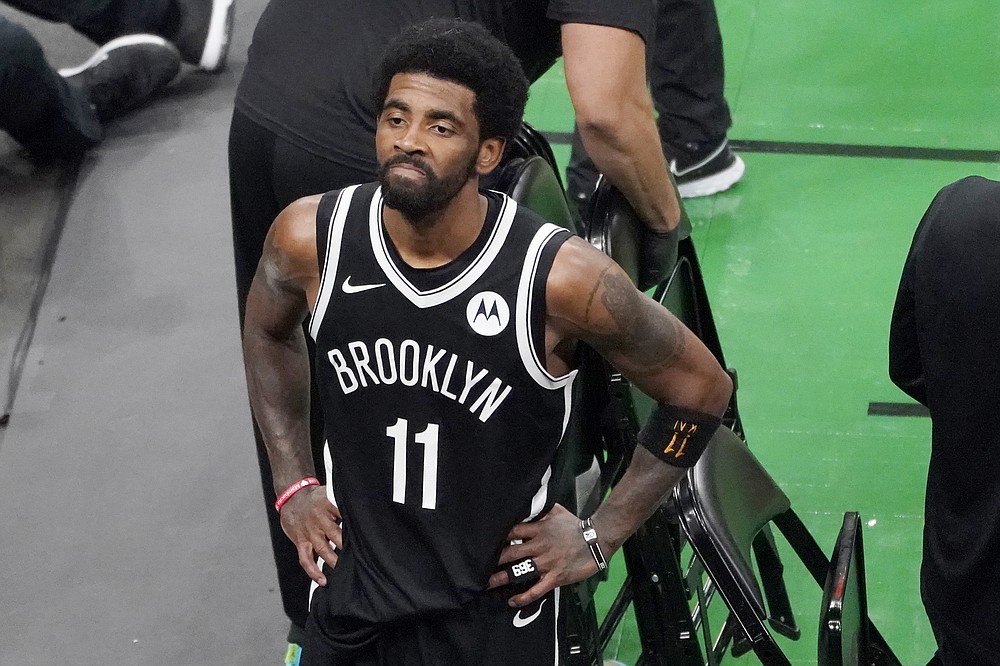 Brooklyn Nets guard Kyrie Irving looks up at the fans at TD Garden after they defeated the Boston Celtics in Game 4 during an NBA basketball first-round playoff series, Sunday, May 30, 2021, in Boston. Irving was booed and heckled by the fans all game. (AP Photo/Elise Amendola)
ADVERTISEMENT