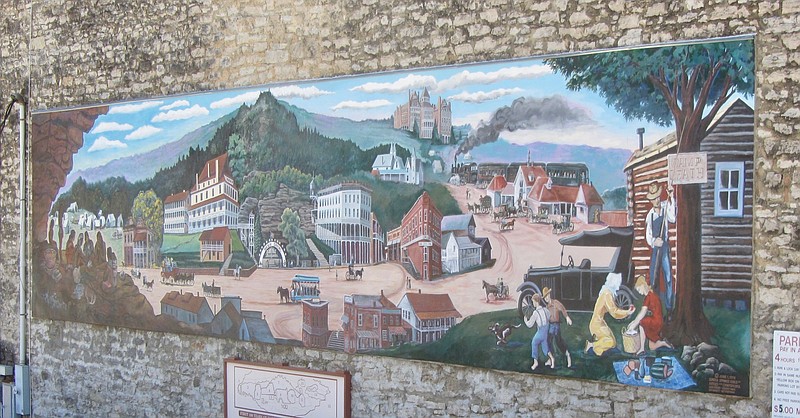 A downtown mural sums up Eureka Springs history since the city’s 1879 founding. (Special to the Democrat-Gazette/Marcia Schnedler)

EUREKA SPRINGS — The online Yellow Pages site lists 99 dining spots for Eureka Springs. That's nearly one for every 20 full-time residents in this Ozarks town. If Little Rock had the same ratio, Arkansas' capital city would bristle with something like 10,000 eateries.

That flabbergasting comparison makes the point that Eureka Springs, with a year-round population hovering around 2,000, can fairly claim to be Arkansas' tourism capital — although Hot Springs might make a rival case.

Having weathered the economic crisis brought on by covid-19, Eureka Springs is counting on this summer to be a boom season as pent-up demand sends Arkansans and families from nearby states back on the road. Most restaurants are open. So are most lodgings among the 107 listed by the Yellow Pages, as well as shops and other attractions.

There's a sacred focus to a few sights on the outskirts of this Northwest Arkansas community. The most sublime is Thorncrown Chapel, tucked on wooded terrain off U.S. 62 three miles west of downtown. E. Fay Jones' masterpiece of religious architecture, dedicated in 1980, is ranked by the American Institute of Architects as the fourth-best building design of the 20th century. 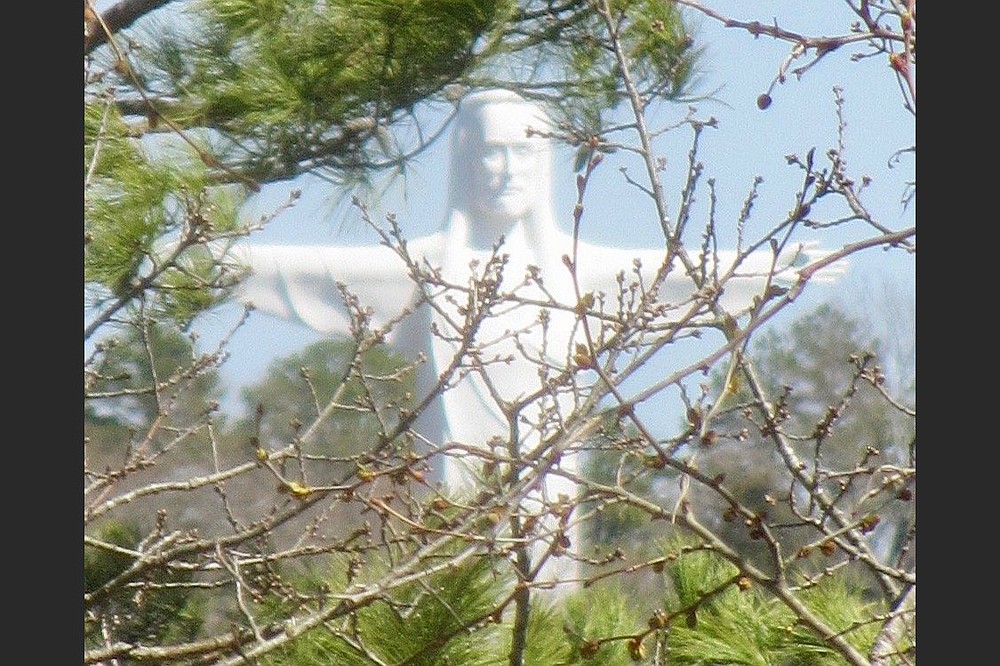 Christ of the Ozarks is visible from various vantage points in Eureka Springs. (Special to the Democrat-Gazette/Marcia Schnedler)

No architectural awards have gone to Christ of the Ozarks, a towering statue of Jesus erected in 1966 northeast of downtown off Arkansas 23. Standing 66.5 feet high, the figure does merit one superlative: It ranks as the tallest statue of Jesus in the United States. It's also the 10th tallest statue of any kind in America, a list headed by the Statue of Liberty.

Christ of the Ozarks shares a Christian enclave with a major summer attraction, the Great Passion Play, which opened its regular 2021 season last weekend. The complex also features a Bible Museum, housing more than 6,000 books of Scripture. On the grounds is a Berlin Wall slab inscribed with a phrase from the 23rd Psalm in German. There's also Noah's Ark Petting Zoo.

The heart of Eureka Springs is alluring not for any awesome monuments, but rather for its distinctive setting, as mapped out at topographic-map.com.

"The city has steep winding streets filled with Victorian-style cottages and manors. The historic commercial downtown of the city has an extensive streetscape of well-preserved Victorian buildings. 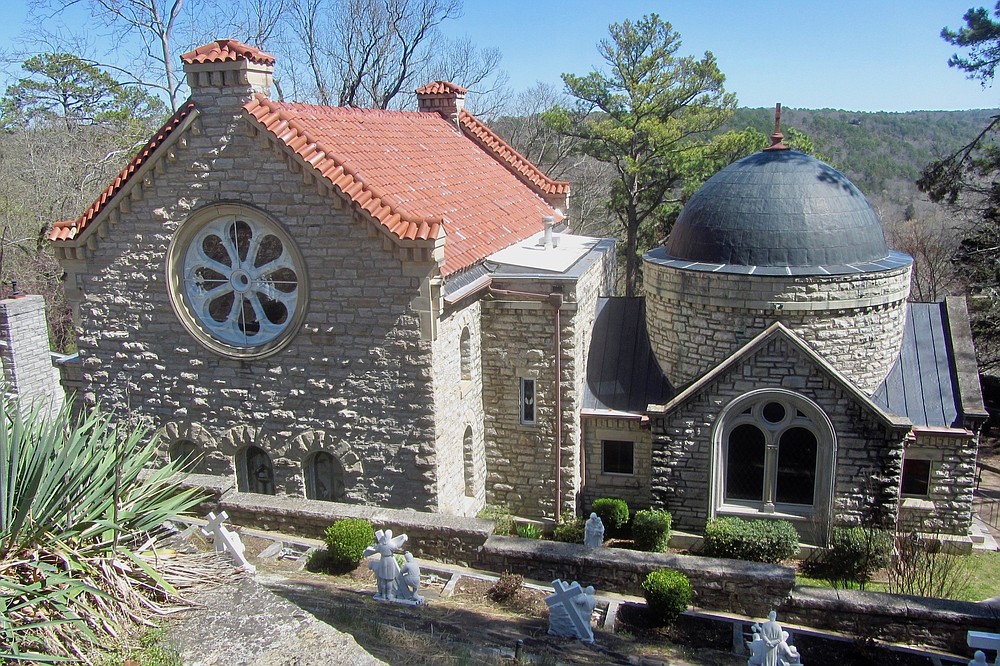 St. Elizabeth Catholic Church can be entered from two levels off two hilly streets. (Special to the Democrat-Gazette/Marcia Schnedler)

"The buildings are primarily constructed of local stone, built along streets that curve around the hills and rise and fall with the topography in a 5-mile long loop. Some buildings have street-level entrances on more than one floor. The streets wind around the town, and no two intersect at a 90 degree angle; there are no traffic lights."

A much-photographed structure with doors on two levels is St. Elizabeth Catholic Church, once featured by Ripley's Believe It or Not as "the only church you can enter through the bell tower." The upper entrance is on Crescent Drive; the lower one is on Spring Street, the winding thoroughfare for much of what is designated as the Historic Loop.

Just off a high point of the Historic Loop, the 135-year-old Crescent Hotel & Spa bills itself as "the most haunted hotel in America." Management operates ghost tours of its possibly spirit-populated precincts, including Room 3500 with "the lady in the Victorian lingerie." Refreshing spirits (and pizza) can be consumed at the hotel's Sky Bar, which offers sweeping views of Eureka Springs and surroundings.

Parking is at a premium on and off the city's serpentine streets. A sensible option is to park all day for $5 at one of two boarding locations for the trolleys of Eureka Springs Transit. Unlimited riding on the trolleys costs $6 ($2 for children 7-11) and reduces exertion strolling the seldom level sidewalks. 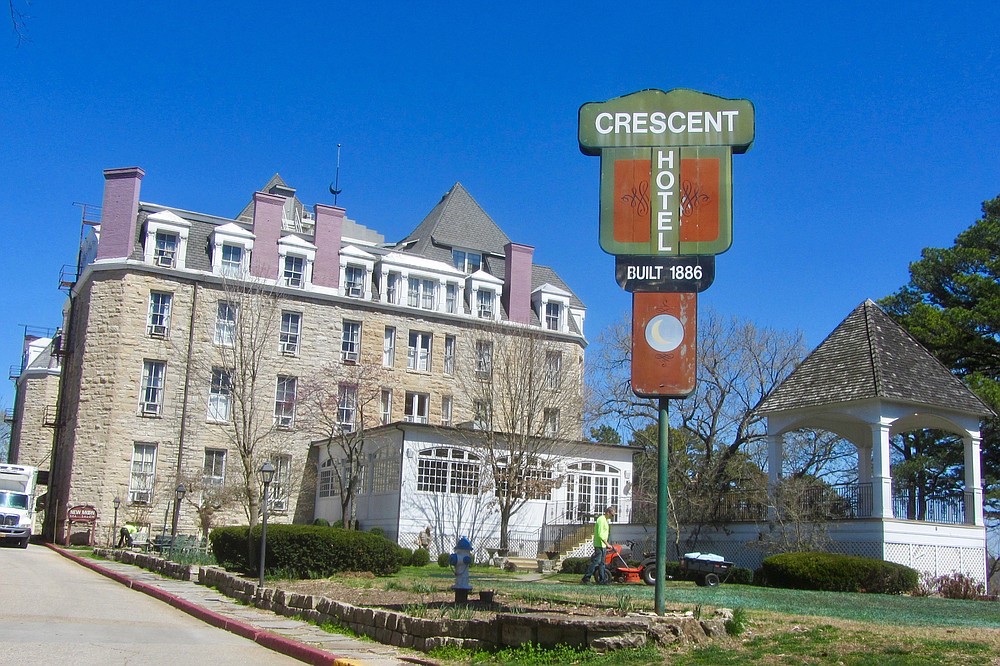 The Crescent, built in 1886, styles itself as “America’s most haunted hotel.” (Special to the Democrat-Gazette/Marcia Schnedler)

Among the local distinctions is one noted at gaytravelmagazine.com: "Eureka Springs is the only city in Arkansas with a full non-discrimination ordinance clearly stating that Eureka Springs embraces equality, diversity and welcomes everybody. The city understands that equality and diversity are good for business, quality of life — and essential for the arts, culture and entrepreneurial growth."

And in case you wondered, yellowpages.com lists 968 restaurants and other eating places in Little Rock. That's roughly one for every 200 residents — 10 times Eureka Springs' ratio.