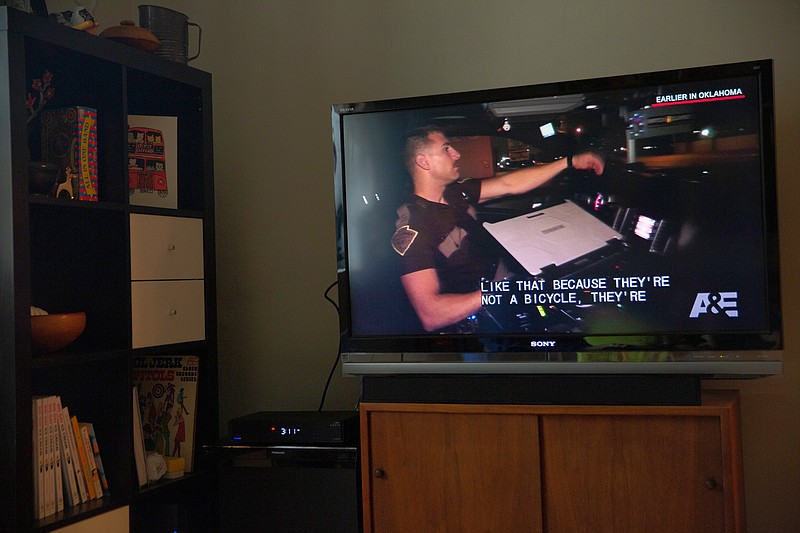 A television at a home in Fort George, N.Y., displays a scene from “Live PD,” a reality television show featuring police officers at work that was canceled in 2020. The Texas state legislature has passed a bill that would make it illegal for reality television crews to film law enforcement officers in the line of duty. (The New York Times/Mengwen Cao)

Two years ago, a television crew gathered in the small city of Hawkins, Texas, to film the life and work of Manfred Gilow, the chief of police there.

Cameras followed Gilow as he and his officers responded to calls, snapped handcuffs onto wrists and searched vehicles for drugs. The program was not available on Texas televisions; Gilow is from Germany, and that is where "Der Germinator" (a portmanteau of "German" and "The Terminator") was broadcast.

Last year, after the nationally broadcast policing shows "Cops" and "Live PD" were canceled, "Der Germinator" filmed a second season. But prospects for a third may have dimmed last week, when the Texas legislature passed a bill that would make it illegal for law enforcement agencies to authorize reality television crews to film officers on duty.

"Policing is not entertainment," said James Talarico, the Democratic state representative who introduced the legislation. The office of Gov. Greg Abbott, a Republican, did not respond to requests for comment this week about whether he would sign the legislation.

Reality law enforcement shows, Talarico said, "rely on violent encounters between citizens and the police to boost their own ratings." He cited an investigation by The Austin American-Statesman, which reported last year that law enforcement officers in Williamson County, Texas, were more violent when the "Live PD" cameras were rolling.

The bill, which the legislature passed with bipartisan support May 13, is named after Javier Ambler II, a 40-year-old father of two who died in 2019 after Williamson County officers forcibly arrested him in front of a "Live PD" camera crew.

Ambler's sister, Kimberly Ambler-Jones, 39, said she believed that her brother would still be alive if the television crews had not been filming. "Because they had 'Live PD' there, it had to be hyped up," she said. "It had to be drama."

That show was taken off the air last June. So was "Cops," which had beamed arrests, confrontations and car chases to televisions across the United States since 1989.

The cancellations came amid nationwide protests over the police killing of George Floyd in Minneapolis. They also followed years of campaigning by the racial justice organization Color of Change, which had been pushing networks to drop "Cops" since at least 2013.

But with two flagship policing programs already canceled, it is unclear whether the law would have any immediate effect if approved by Abbott.

A reality series set in Texas called "Lone Star Law," on Animal Planet, could most likely continue filming as long as it keeps its focus on wildlife and game wardens, Talarico said.

"Der Germinator," on the other hand, could be at risk.

Gilow argued that the program should be allowed to continue, characterizing it as more of a documentary than a reality show. He said it offered German viewers a glimpse of life in the United States, as well as a cautionary tale about the consequences of crime.

"I think it is positive," Gilow said. "But you will have some people just hating it because they hate the police." He added that the show did not violate anyone's rights and blurred the faces of people who did not consent to be filmed.

Ambler-Jones said she hoped that Abbott would sign the bill — and that similar legislation would spread beyond Texas.

"I know people feel like this is just entertainment," she said of reality policing programs. "But you don't understand what the person on the other side of that camera is dealing with."

For months after Ambler's death, his family did not know what had happened to him — only that he had died in law enforcement custody. The details became public last year, after The Austin American-Statesman and the news outlet KVUE obtained body camera footage.

Ambler was driving in the Austin area on March 28, 2019, when Williamson County deputies tried to stop him because he did not dim his headlights to traffic, officials said. After deputies tried to pull Ambler over, authorities said, he kept driving for more than 20 minutes before crashing his vehicle.

The body camera footage showed that the officers restrained Ambler and used a Taser on him multiple times. "I have congestive heart failure," Ambler could be heard saying. "I can't breathe."

Ambler was taken to a hospital, where he was pronounced dead. "Live PD" footage of the arrest was never broadcast on television.

Since then, Williamson County officials have faced several lawsuits related to reality television footage. Two deputies were indicted on second-degree manslaughter charges in Ambler's death, and the former county sheriff, who lost his seat after a November election, was indicted on charges of evidence tampering. All have pleaded not guilty.

A spokeswoman for Williamson County declined to comment because of pending litigation. Big Fish Entertainment, the production company behind "Live PD," did not immediately respond to emailed questions.

Talarico said he hoped the legislation, if signed into law by the governor, would keep "Cops" and "Live PD" out of Texas for good. "Without the force of law, there's nothing preventing these shows from coming back," he said, "except for their own conscience."