Living history: Colonial Williamsburg takes nosedive into the past 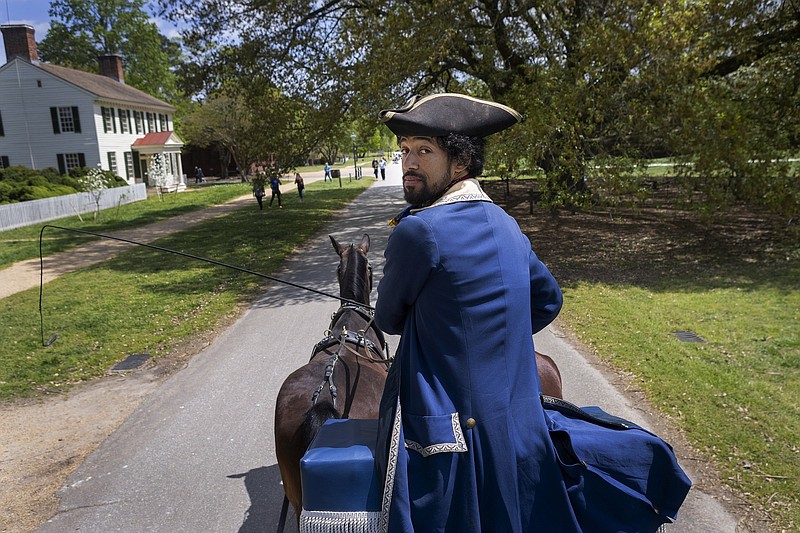 Adam Canaday is a carriage driver in Colonial Williamsburg. (For The Washington Post/Julia Rendleman)

WILLIAMSBURG, Va. — On the streets of Colonial Williamsburg — one of the world's premier living-history museums — Emily James cuts a formidable figure. Portraying Edith Cumbo, a free woman of color who walked these byways in the 18th century, James tries daily to convey to tourists the humiliations and contradictions Cumbo lived with.

"I'm restricted," she explains to a group of mask-wearing visitors on a walking tour one late-April morning. "Because the laws didn't say 'free' or 'enslaved.' They said 'Negroes.'"

James has been embodying Cumbo in this mile-by-half-mile historic area for a decade, in a career in "actor interpretation" spanning 34 years. Though she has always loved the work, it has taken on deeper resonance of late. Colonial Williamsburg — a place where theater lives, too — has been grappling with more determination than ever with the harsher realities of its past, and particularly with the lives of its Black inhabitants, most of whom were enslaved and formed the majority of its population in the 1700s.

It is through performance of various kinds that this bastion of history is seeking to raise awareness of Williamsburg's legacy, one far more diverse than visitors heard about in the early days of the historic restoration, opened in 1937. The instruction has gone out lately to all of Colonial Williamsburg's dozens of actor-interpreters that the city's slaveholding past is to figure in every tour and talk. The sense that the rosy vision of hard-working artisans and horsemen in period garb requires more context pervades this extraordinary pocket of history.

"We've shifted in how we think of things," said Beth Kelly, Colonial Williamsburg's vice president of education, research and historical interpretation. "Our research was always done with an Anglican-European point of view. Everything is grounded now in the 18th century — and the truth."

To a degree astonishing to a visitor whose decades-old memories of Williamsburg run to aproned staff members churning butter, this center of Colonial exhibition uses the tools of the arts to convey that truth. The coronavirus forced the closing in April 2020 of the site and its 604 structures, 88 of them original. It reopened last June with safety protocols that are still in place: I wore a mask as required on all tours, for instance, and sat apart from others at public talks and performances. (The rules, oddly enough, can't be enforced on the pedestrian-only streets running through the Colonial area because they come under the city's jurisdiction; the site and its 1,800 employees are under the auspices of the nonprofit Colonial Williamsburg Foundation.)

But even with the workarounds, theater of one sort or another is happening everywhere you look. Over there on the Charlton Stage, under a canopy of trees, Katharine Pittman is dressed in Martha Washington's finery, recounting the first first lady's first marriage, in Williamsburg. Across the way in the Hennage Auditorium, Kurt Smith is portraying Thomas Jefferson and Robert Weathers assorted other characters, from Jefferson's father to philosopher John Locke, in "Pursuing Happiness," a 30-minute play about the writing of the Declaration of Independence.

And in the middle of town, on the Play House Stage — which sits on the remnants of what is believed to be the first theater of Colonial America — members of the resident Jug Broke Theater Company are performing "Ladies of Llangollen." Claire Wittman's drama, which includes new lyrics to 18th-century songs, is the first in the foundation's history to feature a romance between women.

"Your happiness is my only aim," Wittman's Eleanor says to her fellow poet and lover, Sarah, played by Alyssa Elkins. "I don't want a husband," Sarah replies. "I want you."

Think about it: In the midst of contemporary reckonings about the rights of women and people of color, Williamsburg is giving guests — who number about 550,000 in a normal year — the historical backstories. It's quite daring, and not everyone who attends seems to like it: The half-hour "Ladies of Llangollen" was as discreet as an afternoon tea party, but at least one family in attendance seemed to take umbrage. The instant the characters spoke of their mutual affection, the family sprang from their bench in the socially distanced outdoor playhouse and walked out. 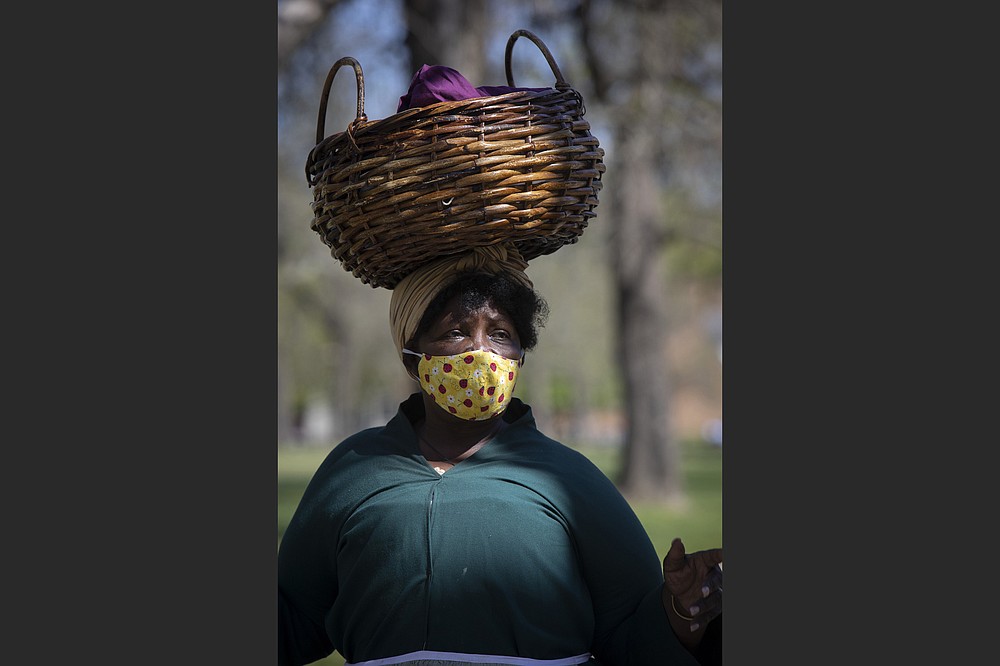 Emily James says it takes five years before Williamsburg interpreters can truly inhabit their characters. (For The Washington Post/Julia Rendleman)

Many more of the 50 or so spectators, though, appeared to appreciate the play, giving its quartet of actors a hearty ovation. "I came many, many times as a child," said Theta Miller, visiting from Lynchburg, Va., with another theatergoer, Mike Tabony. "The last five years, there has been so much glorious interpretation like this."

After the show, Wittman, Elkins and the other actors, Patrick Rooney and Rachel Eiland-Hall, talked about the opportunity to explore new content theatrically and experiencing audiences' differing responses. As with so many subjects dramatized here, the roots of "Ladies of Llangollen" were in research. (Eleanor Butler and Sarah Ponsonby lived together in Britain in the late 18th century.)

"It seemed to me very clear in how they wrote about each other that they were married," Wittman said.

Opening up Williamsburg to stories like "Ladies of Llangollen" is the mission of the site's gender and sexual diversity committee, formed by a group of interpreters and other staff members in 2019. Many of the "programs" — as the talks, tours and plays are referred to — are proposed and developed by the 53 interpreters themselves.

"There was a realization that if we're going to commit to telling the whole story, we're going to tell the whole story," said historian Kelly Arehart, a member of the diversity committee. Another member, actor-interpreter Ren Tolson, said the initiative began as an effort to compile whatever information there was for the staff on gender diversity. The rationale, Tolson explained, was so that "when they get a question, they can handle it [in] an educated, appropriate manner. And then it kind of snowballed rapidly into, 'Hey, there's a lot more here than we thought there was.'"

The imaginative richness of three-dimensional history comes through in every talk with the interpreters. "When you have a character, it's like a marriage," said James, whose husband, Gregory James, also worked as an interpreter until his death in 2013. The basket she balances on her head as Cumbo contains Gregory's costume.

"It takes five years," she added, "to really become that person."

Many of the interpreters, who work year-round, come from formal acting or music backgrounds and stay for the financial security and stimulation; others arrive from a circuit of such historic sites as Monticello in Virginia and Plimoth Plantation in Massachusetts. Fourteen interpreters have earned the special designation of "Nationbuilders": These include James, as Cumbo; Smith, as Jefferson; and Pittman, as Washington, who are paid to portray a single historic personage. Other actor-interpreters play multiple parts.

Stephen Seals, who heads community outreach and program development, plays James Lafayette, an enslaved Williamsburg man who served in the Continental Army under the Marquis de Lafayette. A longtime actor, Seals is a kind of archive unto himself, his psychic shelves stocked with knowledge about Colonial Williamsburg's evolution. At one time, as he and Kelly explained over lunch one afternoon, the foundation did emphasize the working trades of the period. Those carpentry and gunsmithing shops are still popular, but there's been an ever-evolving effort to reveal all facets of the community's past.

"There are certain things about history that you should not avoid," Seals said. "That is, religion — and slavery. And as an interpreter, it's impossible not to be aware of that." 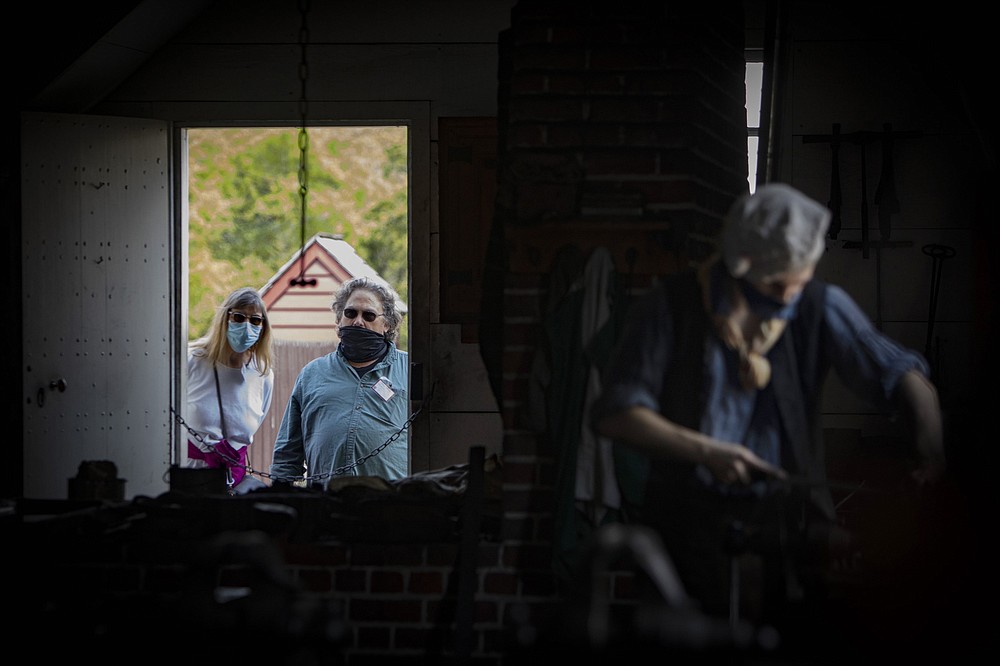 Visitors watch as Broadus Thompson works in the blacksmith shop. (For The Washington Post/Julia Rendleman)

The awareness began in earnest in 1979 when a Black staff member, Rex Ellis, recruited five other Black employees for a group that would attempt to humanize enslaved residents. They were the first interpreters. "The first white member of the unit didn't come until the '80s," Seals said.

"These stories and perspectives have been told here for 40 years, but maybe the balance has shifted in who tells the stories," said Cheryl Ruschau, who, as director of museum theater, is responsible for the performances on the three formal stages. This spring, for instance, there are 19 programs running in repertory, chosen from the dozens of scripts in the site's archives. "My job," she added, "is facilitating and editing."

But because the documentation of the time weighed so heavily in the favor of the white population, the job of depicting historical Black and American Indian figures required deeper and more prolonged investigation. Even now, only a handful of the Nationbuilders are Black, and, at least on the weekend in April when I toured and wandered, the non-white faces among the visitors were few.

The programming, it is hoped, will tip the scales toward an ever more diverse group of visitors — programs such as "Sentiments of American Women," about the women of Williamsburg circa 1775. Staged by Katrinah Lewis, a director from Richmond, the 35-minute play features Lindsey Foster, Zakiyyah Jackson and Michelle Smith. On a sparsely furnished outdoor stage, they give voice to women of all social strata of the time.

"She is a person," Foster, acting as narrator, says of Jackson's enslaved Millie.

"Well, of sorts," replies Smith, playing an enslaver of the period. "She is property."

Jackson is accorded a moment to provide Millie's own assessment to the audience: "I make a way," she says, "out of no way."

In an interview, Lewis spoke to a spiritual unease that afflicts Black actor-interpreters, always consigned to playing some manifestation of oppression.

"It is physical," she said. "I can feel the heaviness of what happened. As Black artists in 2021, we reserve a space to create art that is not about our trauma, that is not a perpetuation of the images of white supremacy. But at Colonial Williamsburg, that is the story to tell."

Of course, there are other stories and experiences to be shared at Colonial Williamsburg. One is a marvel of illumination: a new nighttime immersive event called CW Lights, in which the maze and gardens and lakesides and facades of the Governor's Palace are bathed in gemstone colors of yellow diamond, emerald green and sapphire blue.

But it is the mind-expanding exposures to Colonial Williamsburg's more troubling legacies that shed the most enduring light.

"I'm able to build narratives and stories in ways I couldn't in a regular theater," said Seals, who has played the enslaved James Lafayette for nearly five years. "To walk the same paths that James walked, I sometimes want to weep."