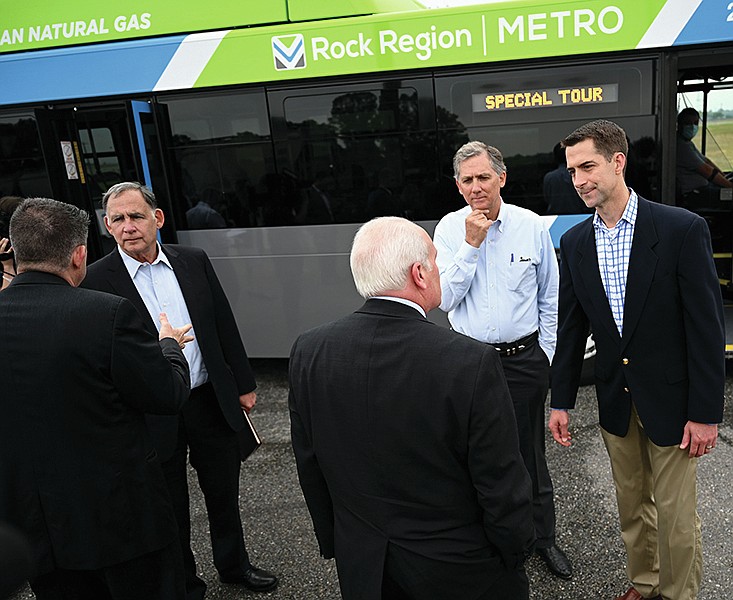 Senator John Boozman, left, Representative French Hill, and Senator Tom Cotton talk with members of the Port of Little Rock Board of Directors after a tour of the area on a visit to discuss infrastructure, trade, and other issues related to the port on Tuesday, June 1, 2021. (Arkansas Democrat-Gazette/Stephen Swofford)

The latest version of President Joe Biden's plan calls for spending $1.7 trillion; the counteroffer from Sen. Shelley Moore Capito, R-W.Va., is $928 billion. Capito is set to meet with Biden today as negotiations continue over a federal infrastructure package.

"We hope Democrats will take yes for an answer," Sen. Tom Cotton, R-Ark., told reporters during a visit to the Port of Little Rock. "Republicans are ready to invest significant amounts of money in our hard physical infrastructure. That's not just things like roads and bridges and waterways and railroads, but 21st-century infrastructure as well, like building out our broadband networks across the country, especially in rural states like Arkansas."

Cotton said he didn't think the government needed to raise taxes to make those investments and that he hoped Congress would move forward with a "good bipartisan infrastructure bill."

"We've already spent hundreds of billions of dollars on state and local governments that are awash in money, and that money can be spent on infrastructure just as easily as it can be spent on anything else," Cotton said.

Sen. John Boozman, R-Ark., a member of the Senate Committee on Environment and Public Works, said he was working closely with Capito.

"Her plan really involves infrastructure in the classic way versus the Biden proposal, which has a lot of other things besides traditional infrastructure, so there have been offers and counteroffers. She's working very hard in good faith to try and reach an agreement because there's just a long history of Republicans and Democrats working together to get these things sorted out regarding infrastructure, so hopefully we'll come to an agreement," Boozman told the Arkansas Democrat-Gazette.

White House press secretary Jen Psaki said last week that the GOP-backed spending proposal lacks enough funding for some of Biden's top priorities. Republicans have criticized Biden's infrastructure plan for including funding for things that haven't historically been thought of as infrastructure, such as child care and home health care.

Boozman touted other infrastructure measures that have received bipartisan support, including the Surface Transportation Reauthorization Act of 2021, a bill that would set a new baseline funding level of more than $300 billion for federal programs for highways, roads and bridges. It unanimously advanced out of the Senate committee last week.

Both senators said they would need to see the details of Capito's proposed legislation before ultimately deciding whether they would support it.

"But I think that's the best course of action, is to move forward and address the genuine infrastructure needs that our country has, try to do so in a way that's fiscally responsible and that works with both parties," Cotton said.

Cotton and Boozman, along with U.S. Rep. French Hill, R-Ark., were in Little Rock on Tuesday for a bus tour of the port and a meeting with port leadership and industry officials.