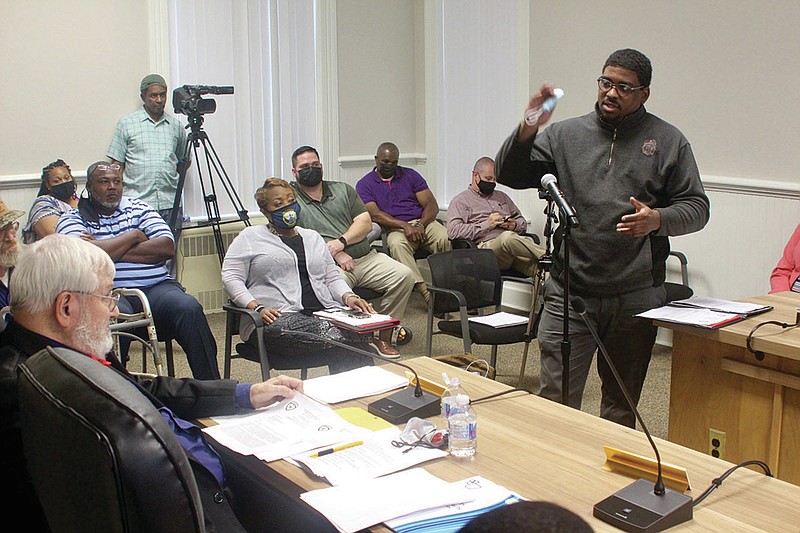 Jefferson County Sheriff Lafayette Woods explains to Justice of the Peace Conley Byrd why the vacant slots he requested to be filled are needed.

Jefferson County’s hiring freeze and the county judge’s urging to eliminate positions did not stop the Quorum Court’s Human Resource Committee from approving numerous requests to fill vacancies during a meeting Tuesday.

A vote to fill a vacant deputy collector position in the tax collector’s office was on the agenda but was substituted with a motion by Justice of the Peace Conley Byrd to leave the position vacant because of the ongoing hiring freeze.

For the lack of a second, his motion failed, and the original vote was back on the table.

“We talked about this not long ago when we had our special meeting that we were going to need to reduce the number of positions in the county by at least 15,” said Byrd. “This is a big position, but this is the one where we’ve had a lot of confusion in the past. They have a chief deputy now; they can fill those positions and cross-train those folks. I don’t see any reason to fill that position.” Tax Collector Tony Washington disagreed with Byrd, stating that he couldn’t cross-train because of segregation of duties.

“You can’t write checks and move checks,” said Washington. “You can’t be up front collecting money, then go in the back counting money.” Washington said his office is struggling because it is understaffed.

“The number of parcels in this county hasn’t changed. Whether you live here or not, those parcels have to be paid,” said Washington.

“We voted for a hiring freeze, and these things need to be considered,” said Byrd. “We need to tighten our belt.” Shawndra Taggart, the county clerk, said she needed a voter registration clerk because of the cross-training in her office.

“In my office, we do cross-train, two people who do payroll, four people that can do probate,” said Taggart.

“I started with 10 employees. Now I’m down to seven,” said Taggart, whose office is the official bookkeeper of the county government and who serves as the clerk for the county court, Quorum Court and probate court. “Jefferson county does have a lot of employees; I’m not knocking that, but it’s not in my office.” Byrd said he felt that, if the county was going to succeed in personnel reduction, empty slots needed to remain vacant.

“I’m not trying to pick on one particular department, but when we have a reduction in personnel, we need to try not to fill those positions and allow for cross-training in the office to get the jobs done,” said Byrd. “I’m not saying that the particular job is not important, but if it’s cross-training going on, then other people in the office should be able to pick up the slack.” Byrd stood firm in his position and consistently voted against the hiring proposals.

All committee members did vote in favor of filling the vacant detention and juvenile justice facility cook position.

Byrd said some of the positions had been vacant for some time, and yet the departments were able to function.

“We have a hiring freeze, but I haven’t heard anyone say no but me,” said Byrd. “A hiring freeze that we all agreed to before this time.” Other justices of the peace considered the fact that employees had left their positions for various reasons, making it difficult to cross-train in the understaffed departments.

“I feel that if someone left that position, it may be a situation where they do need that particular person,” said Human Resource Committee Chairman Cedric Jackson.

“It is not going to be easy, but when the money starts getting tight, something has to give,” said Byrd.