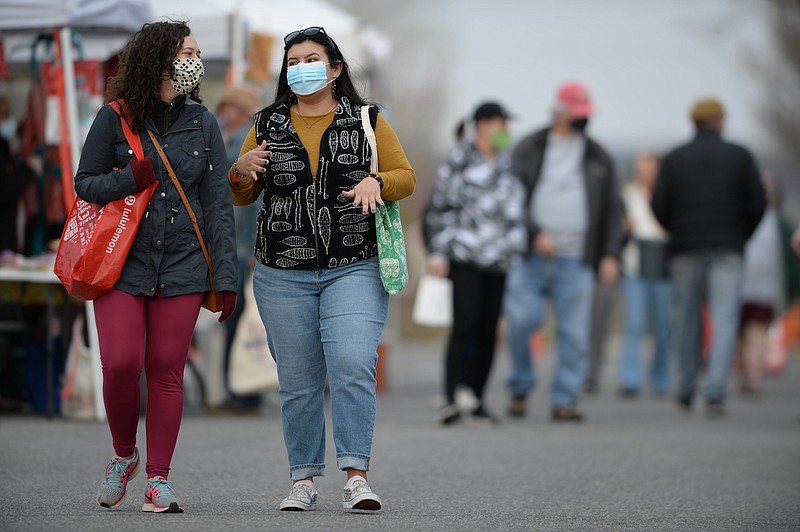 Council members who supported the change said requiring masks puts the onus of enforcement on businesses, rather than the city. Requiring masks for unvaccinated people is unenforceable because there is no way to know who is vaccinated and who isn't, they said.

Marti Sharkey, the city's public health officer, said it's most important to emphasize everyone get vaccinated against covid-19 as soon as possible. People will have to operate on an honor system in public, she said.

The city had an ordinance since June requiring face coverings in most indoor public places. Exemptions were made for eating and drinking, settings with 10 or fewer people, people with disabling conditions preventing wearing a mask and outdoor settings with social distancing.

The changed ordinance goes into immediate effect because the council also approved an emergency clause to go with it.

Chief of Staff Susan Norton said administrators are working on new signs businesses can post about the updated recommendations, and businesses can choose to require masks and exceptions are made for people with disabling conditions.

An initial draft of the proposal the council considered Tuesday would have required masking for those not fully vaccinated. Council Member Teresa Turk made the motion to change the policy to a recommendation. The requirement would have put businesses in a difficult situation, she said.

Council Member Matthew Petty cast the sole no vote against changing the language from required to recommended, saying the stronger language would send a clearer message. He voted in favor of the final version of the ordinance.

In other business, the council unanimously approved asking voters to continue the city's 1-cent sales tax in a special election Aug. 10. The tax generates about $22.5 million for the city each year, and is shared 60-40 between general operations and capital improvements.

As it stands now, the tax is set to expire in June 2023. A successful election would continue the tax for another 10 years.

Steve Clark, president of the Fayetteville Chamber of Commerce, spoke in favor of hosting a special election and for the tax itself, saying the City Council and administration have proven to be good stewards of taxpayer money in providing essential services.

The council also unanimously approved making Juneteenth a paid holiday for city employees starting next year on June 19. The city employs about 700 people.

The resolution was sponsored by Council Member D'Andre Jones and says the city "calls on all persons to reflect on the history of slavery in the United States and the historic struggle of African Americans to end slavery and discrimination in all its forms so there will finally be 'Freedom and Justice for All.'"

Raven Cook with the Northwest Arkansas chapter of the NAACP spoke to the council. She said the resolution offers the city a chance to reflect on how a legacy of systems tied to white supremacy still impacts the community.

"Juneteenth is a part of the history I carry. It is in the echoes in my voice, it is in my flesh and my spirit. And I am a resident of this city," Cook said. "That history is tied to enslaved Africans brought to this country in forced migration."

For the latest national health recommendations on wearing masks, go to: