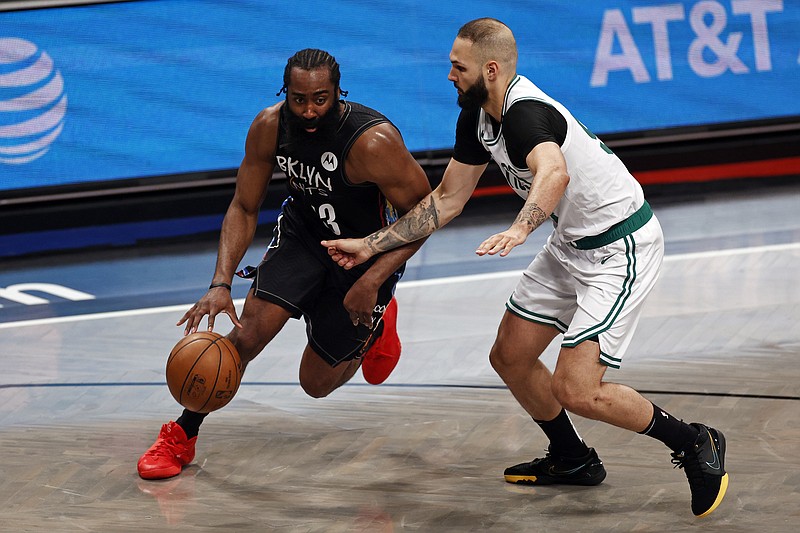 NEW YORK -- Kevin Durant, Kyrie Irving and James Harden had just eight games together in the regular season, few enough to wonder how good they could really be.

Five games against Boston provided some answers -- and a chance to keep making up for all their lost time.

"We just don't want to take any of this time for granted," Irving said. "This doesn't happen too often kind of in our culture, in our history, where three of the best scorers to ever play the game are on one team."

Harden had 34 points, 10 rebounds and 10 assists for his first postseason triple-double with Brooklyn, leading the Nets into the Eastern Conference semifinals with a 123-109 victory over the Boston Celtics on Tuesday night in Game 5.

Irving scored 25 points and Durant had 24 for the Nets, who will face the Milwaukee Bucks in their first appearance in the second round since 2014. The No. 2-seeded Nets will host Game 1 against Giannis Antetokounmpo and the Bucks on Saturday.

"We've got our work cut out for us," Durant said. "I mean, he's a two-time MVP, Defensive Player of the Year for a reason, so we're looking forward to the challenge."

Despite their limited time together during the regular season, the Nets' three superstars showed how potent they can be in this series, particularly when they combined for 104 points in Game 4.

"We weren't even worried about the playoff run yet, we were just happy to be on the court together," Harden said. "So it's great to get one series out of the way and like I said, we'll take tomorrow off and we'll recoup and get ready for a tough Milwaukee team."

Brooklyn was nowhere near as potent as Game 4, when it rang up 141 points. But a surge here and there was good enough to wrap it up.

The finishing one came with the Celtics trailing by just eight with under eight minutes to play. Durant made a three-pointer, Jayson Tatum turned it over and Irving nailed another three on the break, pushing it to 103-89 with 7:19 to play.

Evan Fournier scored but Harden answered with another three, and Bruce Brown scored inside, an 11-2 burst in less than 90 seconds that broke it open at 108-91 midway through the fourth.

Tatum had 32 points and nine rebounds for the Celtics, who made the Eastern Conference finals last year but went quickly with Jaylen Brown and Kemba Walker unavailable.

"Jayson continued to make plays. We didn't do enough as a team. But he showed a lot of mettle this year," Celtics Coach Brad Stevens said.

Fournier added 18 points and Romeo Langford had 17 starting in place of Walker, who missed his second straight game with a knee injury.

"It's been a lot. Injuries on top of injuries. Guys not being able to play together. A lot of personal stuff. It's life, things more important than basketball, but you've got to be professional," guard Marcus Smart said.

The Nets were eager to avoid a return to Boston after a fan threw a water bottle at Irving after Game 4, but the clincher didn't come easily.

The Celtics hung in the game, not letting the Nets build a double-digit lead until a 7-0 burst early in the second half made it 66-54. Boston recovered and trailed just 86-79 after Tatum made a jumper at the buzzer to end the third.

Nets Coach Steve Nash said he hadn't talked to Irving much about what the opportunity to eliminate his former team from the playoffs meant to him. But Nash recalled there be an extra edge for him when he went to Phoenix and beat Dallas in the 2005 postseason.

"I don't know if he feels the same way to be honest, but there is a little bit more to it," Nash said. "For me, I spent six years in Dallas, six very important and impressionable years, influential years in my career. So there was a lot of kind of awkward, strange feelings in that experience." 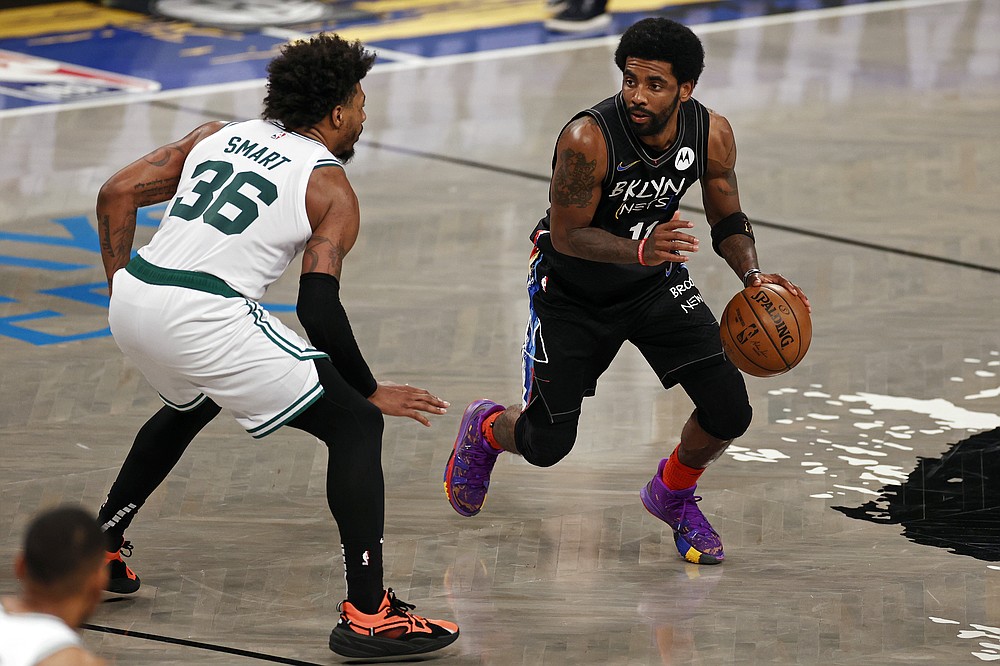 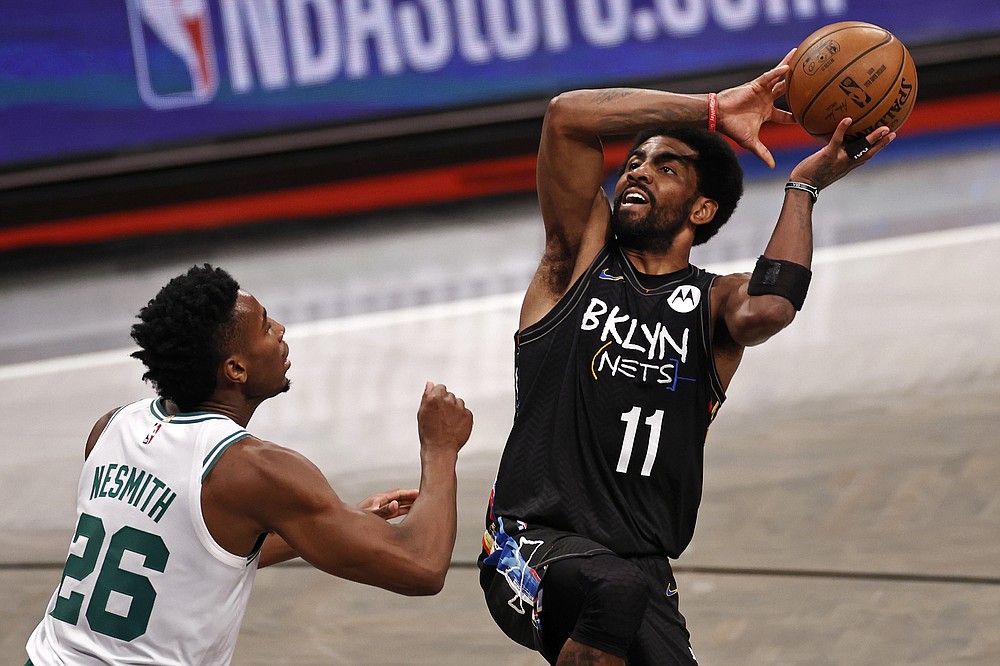 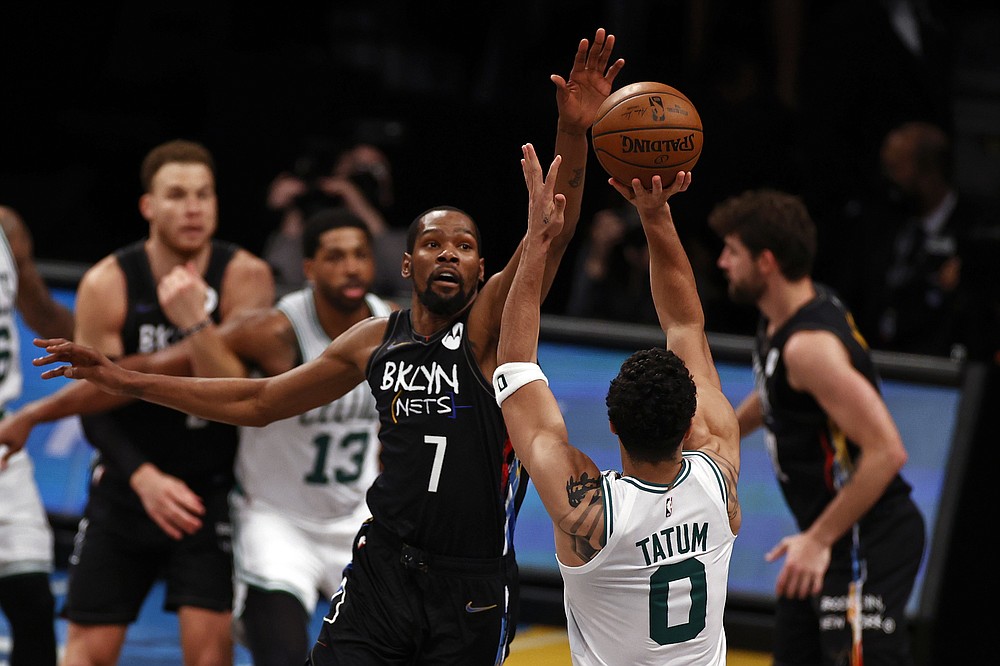 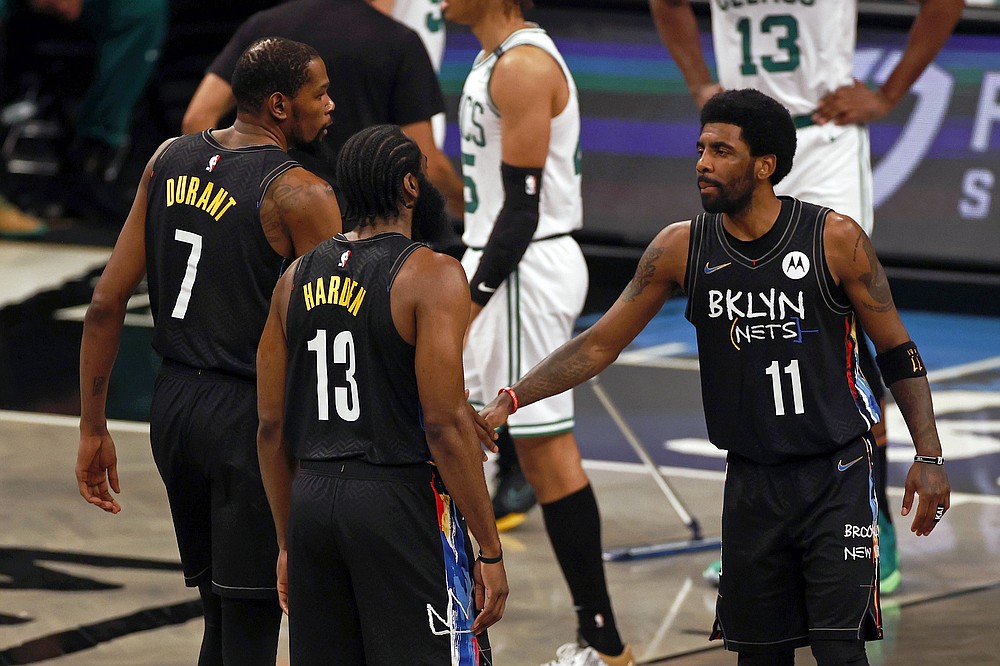 Brooklyn Nets guard James Harden, Kyrie Irving (11) and forward Kevin Durant react after a basket against the Boston Celtics in the first half of Game 5 during an NBA basketball first-round playoff series, Tuesday, June 1, 2021, in New York. (AP Photo/Adam Hunger) 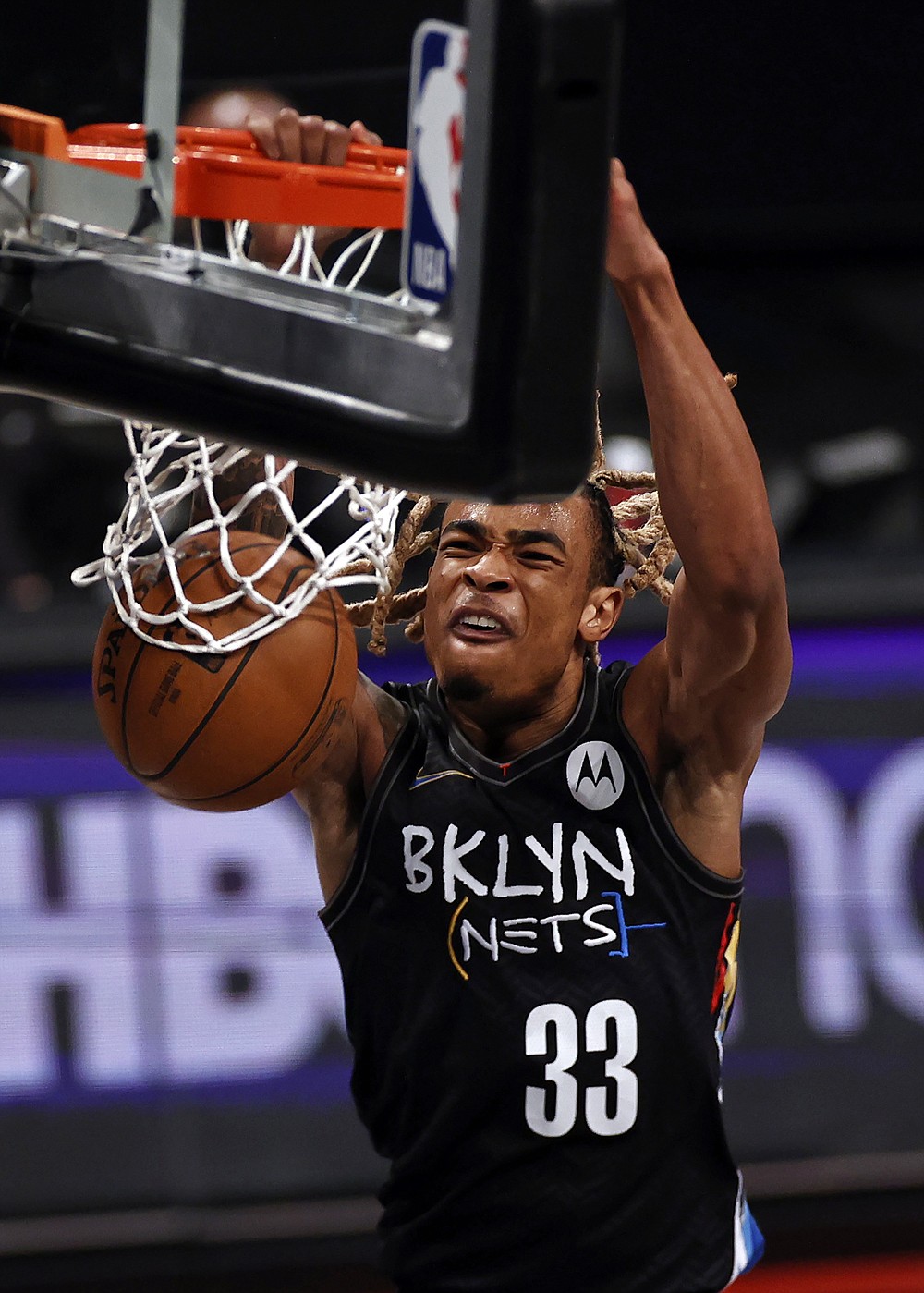