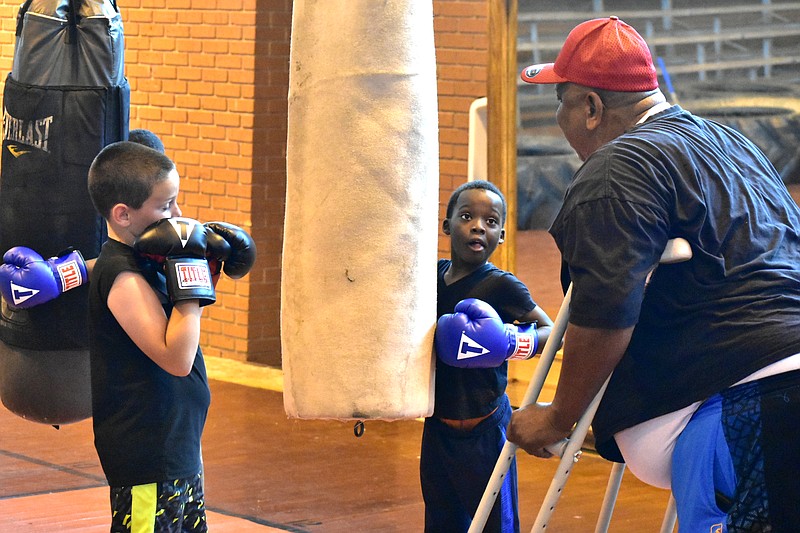 Usually held in December, the Arkansas State Silver Gloves championships will be held in June after a 1½-year wait.

"When we got back from nationals, that was the first time we started hearing about covid-19," said Bryon Hurford, president of the Arkansas local boxing commission for USA Boxing, which sanctions the Silver Gloves, open to boxers ages 8-16.

Qualifications for the February 2020 Silver Gloves national tournament began in December 2019 with the Arkansas state championships and continued with the Region 6 tournament the next month. But the effects of covid-19 forced the 2021 Silver Gloves to move to the weekend before Labor Day, and in Arkansas the road to nationals is going through Pine Bluff for the first time starting this weekend.

"I'm thrilled [Hurford] selected us to host," said Albert Brewer, founder and coach of Gloves Not Guns, the host club for the state Silver Gloves, to be held Friday and Saturday at the Pine Bluff Convention Center. "I am thrilled to death. This is historical. I want to do such a good showing, that they don't want to take it back to North Little Rock."

Fights begin at 7 p.m. Friday and 3 p.m. Saturday. Ticket prices are $10 for adults and $5 for children older than 5. Children 5 and younger will be admitted free.

The North Little Rock Community Center had hosted the state Silver Gloves for at least four decades, according to both Hurford and Brewer, but officials there declined this year for reasons related to covid-19.

The winners in the state Golden Gloves will move on to the July 22-24 Region 6 championships, also to be held at the Pine Bluff Convention Center. The Silver Gloves nationals are Aug. 31-Sept. 2 in Independence, Mo.

Hurford asked Brewer about Pine Bluff hosting the tournaments after Gloves Not Guns hosted a Boxing in the Bluff tournament April 26.

"Pine Bluff was great in their proposal," Hurford said. "It's still very centrally located. The opportunity, I felt like, was there for Silver Gloves and city of Pine Bluff to give them this chance. It could very well stay in Pine Bluff, to be honest. Usually these tournaments get something and they stay a while."

Those who have never attended a youth tournament of this caliber would be amazed at the boxers' skill level, Hurford said. Following weigh-ins Friday, boxers will be divided into age divisions and weight classes, and a blind draw will be used to determine opponents.

Each bracket will be single-elimination.

"You're not having older kids box against younger kids," Hurford said. "Most people would be surprised to see skill level and enthusiasm. It's not like pro boxing where there's a lot of feeling out. They're going to come right out and punch nonstop. There are three rounds in each match."

Brewer likes his boxers' chances of winning this weekend, including 10-year-old Darrion White, who won the national championship as an 8-year-old at 55 pounds.

"He has improved," Brewer said. "Over the weekend, I was talking with Darrion, and he looked at me with so much confidence and said, 'I'm going to take it all.'"

Because of White's size – Brewer believes he will remain at 55 pounds – the youngster fought boxers at higher weight classes to better train for his own level.

"He always did what we asked of him," Brewer said. "He took the losses, but in the end, when he got the chance to fight some of the boxers in his weight class, it paid off. It'll be hard to beat Darrion. He's a tough kid."