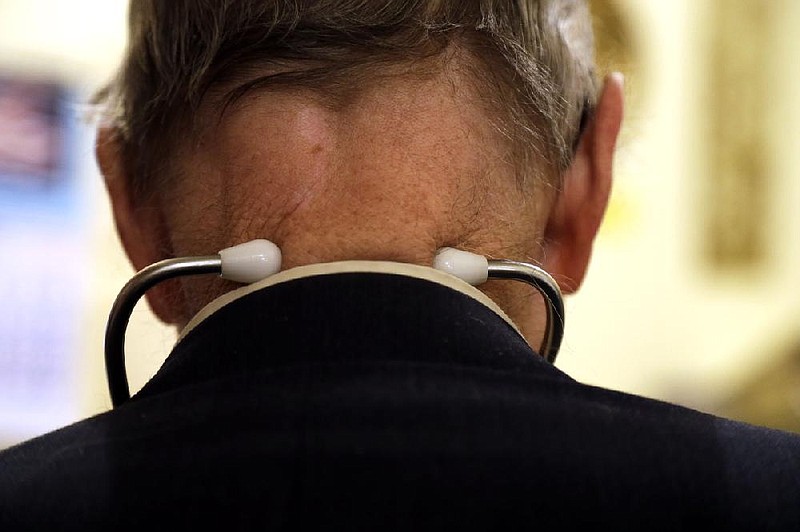 In this Tuesday, Oct. 30, 2012 photo, Dr. Russell Dohner wears a stethoscope around his neck as he tends to patients in his office in Rushville, Ill. (AP/Jeff Roberson)

The board also recommended changes in how wellness credits are handled.

In a 6-3 vote, the Board of Finance approved a motion by board member Eric Munson for the changes, which mostly followed the recommendations made by the State and Public School Life and Health Insurance Board on April 20.

The Board of Finance also proposed to end on-site wellness clinics and, instead, recommended requiring current employees to visit their primary care doctor for the wellness credit.

Most of the current employees in the health insurance plan are covered by the premium plan. The other plans are called classic and basic.

The finance board also called for increasing the state's monthly funding per employee by $50, from $450 to $500, and suggested the increase become effective Aug. 1 of this year instead of Jan. 1, 2022.

These changes are projected to eliminate the projected deficit of $33.3 million in 2022 for the health insurance plan for state employees, according to state officials. The Milliman firm, actuary for the Employee Benefits Division, projected a 2022 reserve estimate of $38.6 million, based on the finance board's recommendations for changes to the insurance plan.

The finance board also recommended to the Legislative Council creating a $10 million set-aside in the restricted reserve fund for the health insurance plan in case that money is needed next year. If the Legislative Council opts not to adopt all of the finance board's recommendations, the board recommended that the council provide one-time state funding to cover the recommendations not adopted for next year.

Along with Munson, board members Larry Walther, Amy Fecher, Susannah Marshall, Keith Konecny of Stuttgart and Clay Conly of Rogers voted for Munson's motion to make these recommendations for changes in the insurance plan.

Board members Dennis Milligan, state Auditor Andrea Lea and Cale Turner of Little Rock dissented. Milligan is the state treasurer. Lea is the state auditor. Turner is a certified public accountant on the board.

Board member Jim Bob Britton of Rogers, who is the commercial banking representative on the board, didn't participate in Tuesday's board meeting.

Afterward, Milligan spokeswoman Stacy Peterson said Milligan, a Republican from Benton, voted against the recommendations because he hasn't had a chance to talk with the people affected the most by them.

Lea, a Republican from Russellville, said she voted against the recommendations because she didn't feel she had sufficient information to make a decision.

Tuesday was the finance board's fifth meeting in the past month to review the insurance plans for both state employees and public school employees.

Walther said the board will meet Tuesday to consider changes to recommend in the plan for public school employees.

Compared with the six surrounding states and Alabama, Arkansas' state employees' contributions to their health insurance plan ranks second-highest and the state's contribution ranks second-lowest, according to the Milliman firm.

The Board of Finance on Tuesday deferred action on the option of discontinuing pharmacy benefit coverage for Medicare-member retirees in the state employees plan and forcing them to go through Medicare Part D for the coverage in 2022. Milliman has projected the savings from this option at $33.9 million.

The finance board on Tuesday also deferred action on the option of post-65 retiree coordination of benefits for next year, which Milliman projected would save $9.3 million for the health insurance plan for state employees. About 11,300 state retirees are enrolled for the benefit, according to Milliman.

Arkansas could change the coordination of benefits so that these members would be subject to the premium plan provisions on the Medicare deductible, inpatient co-payment and Part B deductible and coinsurance, according to Milliman.