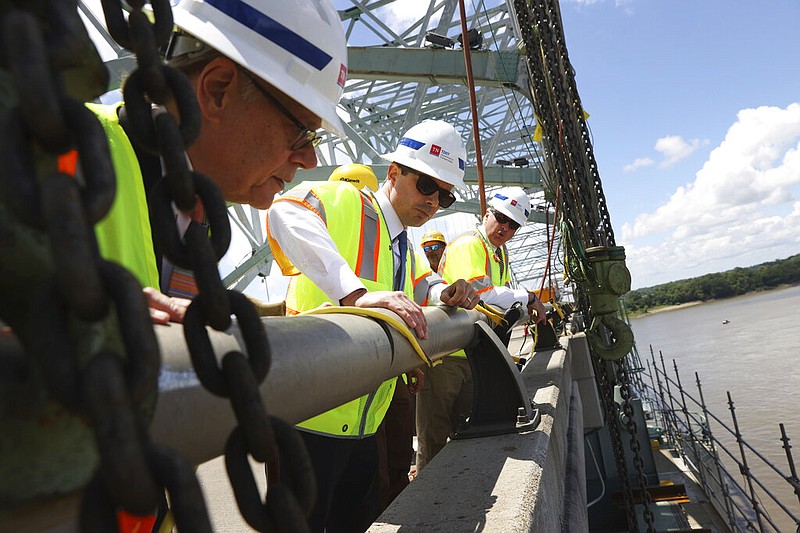 Transportation Secretary Pete Buttigieg (center) gets a look at the cracked beam on the Hernando De Soto Bridge on Thursday with U.S. Rep. Steve Cohen, D-Tenn., (left) and other officials. The span over the Mississippi River on Interstate 40 between West Memphis and Memphis has been closed since May 11. (AP/The Commercial Appeal/Joe Rondone)

MEMPHIS — U.S. Transportation Secretary Pete Buttigieg traveled to Tennessee on Thursday to learn how the closure of the Interstate 40 bridge between Arkansas and Tennessee has affected freight movement over the past few weeks.

Buttigieg met with regional transportation officials at a FedEx Corp. facility in Memphis before a planned tour of the Hernando De Soto bridge and a news conference later Thursday. Shipping giant FedEx operates its fleet of airplanes and trucks out of its headquarters in Memphis, which has seen road traffic problems since the I-40 bridge spanning the Mississippi River was closed after a crack was found in the span. Vehicles have been diverted to the nearby Interstate 55 bridge.

The visit comes as President Joe Biden pushes for a major, national infrastructure package, while Republican senators want a more modest investment in roads, highways and other traditional public works projects. The cracked bridge has served as a symbol of bridge decay in the U.S., which has 45,000 bridges in poor condition and faces a trillion-dollar backlog in needed repairs, the federal transportation officials have said.

Officials stress that making the bridge safe should be the main goal, with maintaining the steady flow of interstate commerce and commuter traffic as other priorities. Trips across the bridge are averaging as much as an hour, officials said.

“Safety is at the heart of what’s happened at the De Soto bridge,” Buttigieg during the discussion at FedEx. “I know that that protracted closure has been frustrating, it has been difficult, it has been challenging, and it has been costly.”

I-40 is a key artery for U.S. commerce, running from North Carolina to California. Manufacturers, shippers and trucking companies rely on the interstate to move products and materials across the Mississippi River. When the 47-year-old, six-lane I-40 bridge is open, about 50,000 vehicles typically travel across it each day, with about a quarter of those being commercial trucks, Tennessee transportation officials say.

The I-40 bridge connecting Memphis and West Memphis was shut down May 11 after inspectors found a crack in one of two 900-foot horizontal steel beams that are critical for the bridge’s structural integrity. Inspectors looking at the four-lane, 71-year-old I-55 bridge have found no problems in the span so far as they assess its long-term ability to handle increased road traffic.

A timetable for the I-40 bridge’s reopening has not been established — officials have said the bridge could be closed for months. Engineers have installed steel plates on each side of the fractured beam and are building a platform to hold heavy equipment necessary for permanent repairs.

The second step of the project, which includes removing and replacing the damaged piece of the beam, is ongoing.

Truck drivers have endured delays on the I-55 bridge, or they have been forced to use two other bridges that cross the river north and south of Memphis. The next nearest Mississippi River crossings are about 60 miles to the south near Lula, Miss., and 100 miles to the north near Dyersburg, Tenn.

Attending the meeting with Buttigieg at FedEx were U.S. Sen. Marsha Blackburn, a Tennessee Republican, and U.S. Rep. Steve Cohen, a Memphis Democrat. They heard from members of the trucking industry about problems caused by the shutdown.

The bridge closure has made trips longer and more expensive for truckers seeking to get across the river on the three open regional bridges. Trucking companies have changed work times for drivers, while truckers are adjusting their travel routes, sometimes on the fly.

In a letter to Biden days after the bridge’s closure, Republican U.S. Sen. Bill Hagerty called for an “urgent, all-hands” approach to the shutdown. Hagerty said the shutdown is “affecting the lives and livelihoods of real people right now.”

Arkansas’ two Republican senators, Tom Cotton and John Boozman, have said they’re concerned about the impact the bridge’s closure will have on the economy. The two have said they want an infrastructure package that is more narrowly focused on traditional public works projects like the bridge.