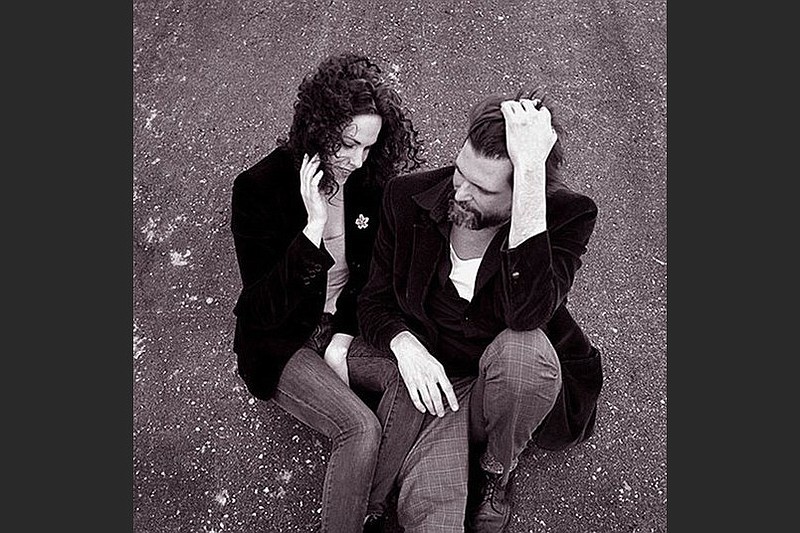 Memphis singer-songwriter Amy LaVere and her husband, Will Sexton, kick off the first Sunday of Rhythm in the Rock, a weekly outdoor series at Little Rock’s Red & Blue Events venue. The family-friendly series will run through June and features music, food trucks and more. (Special to the Democrat-Gazette/Todd Wolfson)

Sunday afternoons in June are about to get a bit more tuneful and tasty in Little Rock.

Memphis singer-songwriter Amy LaVere and her husband, Will Sexton, headline the first Sunday. Richie Johnson of Little Rock will open.

The lineup for the rest of the month includes John Paul Keith on June 13; the Salty Dogs and Isaac Alexander on June 20 and Levelle Davison and Cats & Dogs on June 27.

LaVere, who plays upright bass, creates a potent hybrid of Americana folk-country dusted with jazz textures and highlighted by her compelling lyrics and feathery vocals.

Her latest album, 2019's "Painting Blue," was produced by Sexton and is the latest in a run of stellar work that began with her 2005 debut, "This World Is Not My Home."

Little Rock native Jim Dickinson produced her 2007 LP, "Anchors and Anvils," and she followed that with "Stranger Me" in 2011. The next year she joined Jim's son, Luther Dickinson of the North Mississippi Allstars, Shannon McNally, Sharde Thomas and Valerie June for "Go On Now, You Can't Stay Here."

The concept album "Runaway's Diary" came in 2014, followed by the sweet, acoustic "Hallelujah, I'm a Dreamer," recorded live with Sexton.

She and fellow Memphian Keith formed the group Motel Mirrors and in 2017 released "In the Meantime," which features Sexton as co-writer and guitarist.

After a year of limited live performances, LaVere says she's ready to get back out in front of audiences.

"Every time I pick up my phone, I seem to have a new booking," she says. "I'm so relieved."

Getting musicians back onstage and offering families something to do on a Sunday afternoon was the impetus behind Rhythm in the Rock, says organizer Roby Brock.

"I felt like Sunday afternoon would be a good time to have something casual, where you could float in and float out," he says. "There's no admission. This isn't Riverfest; it's an open invitation to come to a block party."

Brock's day job is as a journalist, radio host and chief executive officer of Natural State Media, which owns talkbusiness.net. He and his wife, Stephanie, opened the Red & Blue Events space about three years ago.

"We handle a lot of luncheon business, rehearsal dinners, birthday parties, things like that," Brock says.

Like many businesses where people gather, Red & Blue was closed for 14 months during the pandemic. Brock had been thinking of an event like Rhythm in the Rock for a while, and when things started opening back up, the time seemed right.

"This is a big celebration to say that it's time to get back out," he says. "Let's do it safely in an outdoor space, and let's start putting some quality of life stuff back together for the community with music and food and family-friendly entertainment. Let's find a reason to celebrate; we've been cooped up for a long time."

Along with music and a rotating variety of food trucks, Brock says different nonprofits will be represented each week to help attendees "learn more about some good causes in the community."

The Arkansas Game and Fish Commission will also be there with attractions for kids, like a mobile aquarium and hands-on experiences.

Baggo games, sidewalk chalk drawing and other features aimed at the young 'uns are also lined up, Brock says.

Helping book the musical acts is Travis Hill, owner of Last Chance Records and a longtime promoter of shows at White Water Tavern and other venues.

"I've got musician buddies who haven't worked for a year, so it was a pretty easy yes," Hill says of his involvement. "I like what Roby is trying to do — having outdoor, family-friendly activities during a time when we think covid is about gone, though we may still be apprehensive about gathering indoors. I just thought this was a win-win for the community and the musicians."

Rhythm in the Rock