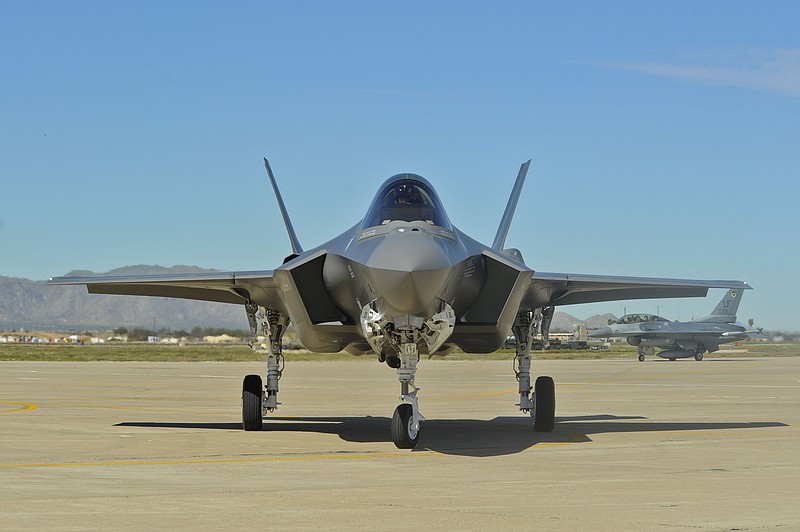 The F-35 Lightning II makes its first appearance March 10, 2014, at Luke Air Force Base. The aircraft was flown in directly from the Lockheed Martin factory at Fort Worth, Texas, and is the first of 144 F-35s that will eventually be assigned to the base. (U.S. Air Force photo/Staff Sgt. Darlene Seltmann)

FORT SMITH -- The U.S. Air Force announced Thursday that Ebbing Air National Guard Base in Fort Smith was selected as the home of future F-35 fighter planes and a Republic of Singapore F-16 squadron, according to a news release.

"Our strategic location, coupled with the River Valley's airspace, strong infrastructure, and capable workforce, will allow us to seamlessly support our valued allies and the next generation of air combat capabilities," Womack said.

"The selection committee recognized that Arkansas is one of the most military friendly states in the nation," Hutchinson said. "Our tax exemption for military retirement income and our licensing reciprocity initiatives are valuable tools for recruiting qualified employees and their families to Fort Smith.

"We have made significant progress toward building the most expansive fifth-generation airspace directly over Ebbing and an aerial range just four miles off the end of the runway. In my meeting with the Singaporean delegation and the U.S. Department of Defense, it was clear that they understood that Arkansas is a military friendly state and that the River Valley would wholeheartedly welcome the fighter-jet training."

Boozman said the decision strengthens Arkansas' role in the nation's defense. He said Fort Smith is the ideal location for this mission.

"This is a win for the community and the entire state that was made possible in part thanks to the dedicated citizens who have tirelessly advocated the opportunities that exist here," Boozman said.

Elected officials have collaborated with state and community leaders to promote the capabilities and assets the Fort Smith region offers for military training and readiness, the politicians said in the press release. They've also urged the Federal Aviation Administration to expand military airspace, which will provide more opportunities for specialized training, according to the release.

On July 6, 2020, then-Secretary of the Air Force Barbara Barrett signed a memorandum to establish a permanent Foreign Military Sales training center at a single location in the continental United States for up to 36 F-35 aircraft and a Republic of Singapore Air Force F-16 squadron. The same month it was announced that Fort Smith was one of five finalists to host the mission, according to the release