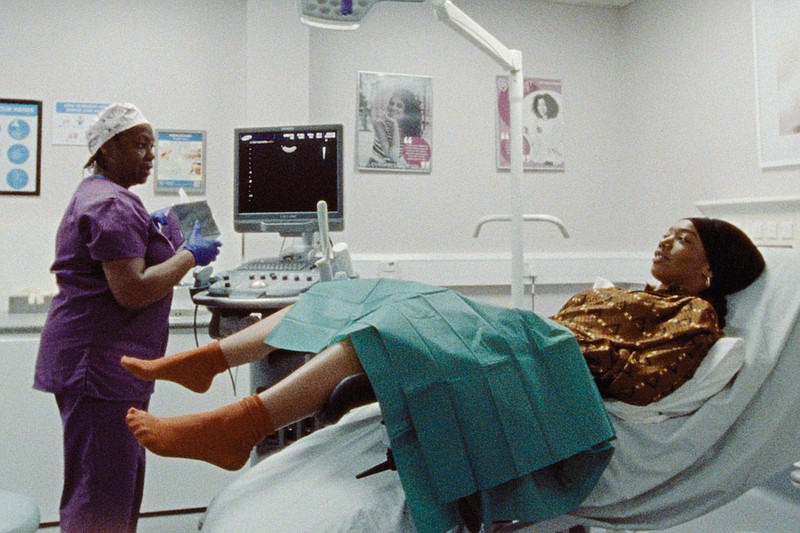 Naomi Ackie (right) struggles with infertility as Alicia in the third season of “Master of None.” (Netflix)

Struggling on her own, Alicia calls her mother, Sharon. She has to muster up the courage to self-administer a shot of progesterone as part of her fertility treatment, and Sharon knows just what to say: Alicia is as strong as other women who have been through this before, isn't she? Plus, Sharon has a down payment on this grandchild, so Alicia can't give up and waste her mother's money. Alicia laughs.

"Mom, that's dark," she says. But it works. Sharon counts down, and the injection goes in.

The scene provides a glimpse into what becomes routine for Alicia (Naomi Ackie), arriving early in the fourth episode of the latest season of "Master of None" (now streaming). The series began as a comedy about the dating struggles of a New Yorker played by Aziz Ansari, but in its third season switches gears to focus on his best friend, Denise (Lena Waithe), and her wife, Alicia. By the fourth episode, Denise and Alicia are divorced after the weight of suffering a miscarriage exacerbates already existing strain on their marriage. Alicia continues trying to conceive on her own.

Ackie anchors the episode, which tracks Alicia's attempts to conceive via in vitro fertilization. The experience is common, but rarely depicted on television in such detail — much less with a single lesbian at the forefront. Keeping with the season's naturalistic style, the episode doesn't shy away from harsh realities, such as when Alicia discovers that many American insurance policies neglect to properly account for members of the LGBTQ community who want to become pregnant.

But, as Ackie pointed out, there are also moments of levity throughout Alicia's journey. The actress said the scene with Alicia's mother was among her favorite to shoot, and one that viewers might watch with "a nice, quiet smile of recognition."

"Sometimes at your darkest points, you laugh. At your happiest points, you cry," Ackie continued. "Working in opposites is really interesting sometimes. I think why it's one of my favorite scenes is that she's alone, but she's not alone. And she's really scared, but she's also super brave."

Netflix, which distributes "Master of None," screened the episode for Family Equality, an organization that works to help build and support LGBTQ families. Family engagement manager Jess Venable-Novak was moved by the levels of representation in the story line. Venable-Novak is on a similar fertility path as Alicia, and said the episode honestly captured, "for lack of a better word, how it interrupts every aspect of your life."

In the show, Alicia lives in New York and visits the clinic alone, with the exception of a scene where her friend and donor, Darius (Anthony Welsh), swings by on her birthday after Alicia gets surgery to remove uterine polyps. Venable-Novak, whose family must commute two hours to the nearest LGBTQ-friendly clinic, noted that Alicia had tried to schedule the surgery for another day.

"We see her having to re-arrange her schedule to be in the office every other day, and to figure out how to get there and get home," Venable-Novak said. "When we talk about the family-building journey, those are never talked about. The doctor doesn't tell you them, the nurse doesn't tell you them, the internet doesn't even tell you about them. The gas money, the struggle to find an LGBTQ-friendly provider... . It's almost like they're add-ons. They're extra expenses, extra things that require emotional energy. Even if your insurance covers your fertility process, they don't cover those."

At the consultation appointment before Alicia begins her first round of IVF, her doctor brings up a deciding factor: the cost. Now divorced, Alicia supports herself on what she makes working at an antiques store. Her insurance policy covers IVF, but only if they are able to prove Alicia is infertile and that she has been trying to conceive with a partner for months. Insurance companies have a code for "being attacked by an orca," the doctor says, but not for "gay and desires pregnancy."

Ansari, who directed the season and co-wrote it with Waithe, added the conversation to the episode's script after learning about gaping holes in insurance coverage.

The fictional Alicia's first round of IVF is unsuccessful, a form of loss Venable-Novak said can still feel "pretty taboo" to discuss at times. Alicia receives the news over the phone from a nurse who has become one of her closest companions throughout the process. We hear Alicia's voice begin to tremble as she wanders off-camera, her grief and anguish visceral. She sits with her emotions, eventually working through her options with her mother. Then she decides to try again.

Ackie said she has only in the past few years started to see more people with platforms speak openly about their struggles with fertility, including miscarriage.

"Sometimes as an actor, you don't get to dig deep into real things — you're kind of glamorizing something, or it's fully make-believe, or you're there for audiences' escapism," Ackie said. "That is really valid, and I love doing that. But there's also something very special about when you get to represent people who haven't been discussed [as much] or haven't been acknowledged."