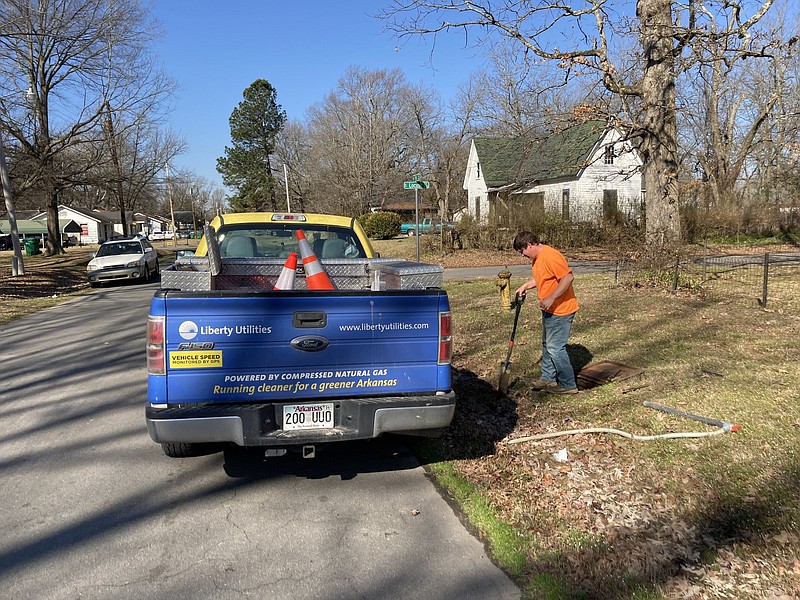 In 2020, Liberty Utilities lost — or couldn’t account for — almost 19 out of every 100 gallons of water it produced, according to figures supplied to the state. Here, a Liberty employee works earlier this year on getting water hooked up for a new customer. (Pine Bluff Commercial/Byron Tate)

Out of every 100 gallons of water that Liberty Utilities produced in 2020, almost 19 gallons were lost or could not be accounted for, according to a report the water utility has filed with the state Public Service Commission.

In raw numbers, the Pine Bluff water company lost or could not account for more than 724 million gallons of water in 2020. That amount of water would fill 24,133 railroad tanker cars that could, strung end to end, create a train that was 274 miles long.

The subject first came up in mid February when bitterly cold temperatures and snow hit the area, causing water pipes to freeze and burst. With so many water pipes leaking all over town, Liberty's pumping system was barely able to keep enough pressure in its lines to forestall a boil order. Many residents had little to no water pressure, and bedrock operations, such as Jefferson Regional Medical Center and the University of Arkansas at Pine Bluff, had to severely limit operations in order to stay open.

The argument was that, had Liberty been more aggressive in maintaining its system over the years, thereby reducing the hundreds of thousands of gallons it was already losing or couldn't account for every day, the effects of the winter storm would have been much less serious.

At one point during the crisis, Mayor Shirley Washington asked a Liberty executive at an update meeting what the company was doing in response to the lost water figure. The answer she got was that the company was going to look into it.

The 920 million figure was a striking increase from 2018, when the utility reported that it had 276 million gallons of lost or unaccounted for water.

Approached with the new lost and unaccounted for number for 2020, which amounts to 18.94%, a Liberty representative noted the improvement over the 2019 number.

"We recognize how critical and precious this natural resource is," said Kelli Price, a company spokesperson. "While we are improving, we continue to take steps to address this ongoing challenge. As part of our infrastructure replacement plan, we make prudent investments each year in Pine Bluff's water system, replacing or upgrading aging infrastructure to help ensure safe and reliable water service."

"We're currently testing meters throughout the community to identify and replace malfunctioning meters," she said. "We're replacing older water meters and implementing automated meter reading (AMR) throughout our service area. Older meters can slow down over time resulting in reduced measurement accuracy. AMR improves efficiency and meter reading accuracy. We are also actively combating water theft, which contributes to our lost and unaccounted for water and unduly burdens our paying customers."

In addition to the area's loss of water as a natural resource, city officials have expressed concern that, with so much water disappearing underground, there are large voids developing where sinkholes could occur.

Rick Rhoden, Pine Bluff Street Department director, said he has seen a large increase in the number of potholes in the city's streets, and he blamed the leaky water system for the problem.

"It's definitely a big concern," he said recently. "You've seen those areas that have big cave-ins that swallow up cars. We had one on Pullen by the fire station. It was washed out in a place there that was big enough to put a car in."

"They fixed it," he said. "It was fixin' to wash out even more, and they were about to have to buy a bridge."

"We're proud to serve Pine Bluff and Jefferson County, not only with high quality water but also as a corporate citizen, supporting the area through economic development, volunteerism and financial assistance," she said. "We'll continue our efforts to listen, learn and improve to better serve our customers and the Pine Bluff community."