Library going for new inside look 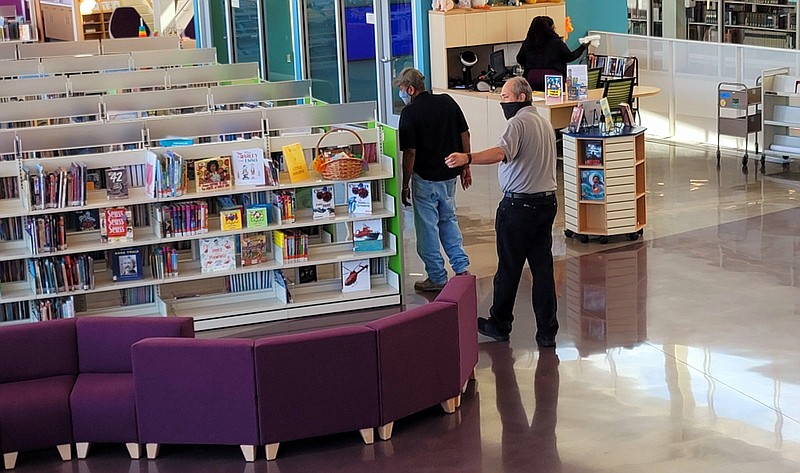 "Out with old and in with the new" is the motto interim director of the Pine Bluff-Jefferson County Library System Ricky Williams is taking to modernize the inside of the Pine Bluff Public Library to match the modern architecture of the building.

"No one wants to see old furniture and dated art," said Williams. "My goal is to give the people what they expected."

Last year, as the new public library was being completed, several city leaders expressed their disappointment in the facility from the not-so-sound-proof sound studio to the lack of a café that was in the original plans.

Williams, who began his tenure as interim director in April, is making small strides to make that happen.

Noticeably, right away when one walks in, there is a feng shui feeling, with the seating area more open, creating a clear line of sight. Shelves have been pushed back and chairs are now placed against the wall.

"Now, when you look down the middle of the library, you have straight shot," said Williams. "There is nothing in your way; you can go from one end to another. I've moved some furniture around and updated some pieces for a more modern appeal, I have abstract art on the way, and I plan to redesign the café."

Planning to visit the Fayetteville public library soon, Williams said that facility has an ideal café set up that he would like to see in person to get ideas.

"I want to visit that library and try to make the dream come true here in Pine Bluff," said Williams. "People asked for a café, I want to give them a café. It didn't happen the first time. That's my goal to make that area look more like a café, and I'm going to accomplish that."

Something else that didn't happen the first time was the complete design of the interior structure. William said there is some work still to be done as engineers were on site last week assessing the situation.

"There are some structural issues in the building," said Williams.

He said in the children's area upstairs, he wants to add some insulation or a drop ceiling. The problem, he said, is that when it rains, "the noise is at a level we aren't happy with."

He also wants to lay carpet in the same area to help with the noise and make it a more comfortable atmosphere for the children who sit on the floor to read and play.

"I'm trying to get as much done as possible before the new director comes," said Williams.

Williams took over as interim director after Bobbie Morgan, the former director, resigned in early April.

On Wednesday, the job position was posted and said the Board of Trustees of the Pine Bluff Jefferson County Library System was seeking a Library Director who is "energetic, innovative, and public service oriented with technological library skills."

Until a new director is hired, Williams will remain in charge of all functions of the library and the overall Jefferson County library system.

Registration for this year's summer reading program is underway and will run through June 12th. Parents can register their children for this year's program by going to the following link: http://pbjcls.readsquared.com/Register.aspx.

Free cooking classes begin June 7 and will continue every Monday for the month of June.

Williams said he has many other ideas that he plans to present to the board of trustees at the next meeting and says so far they have been in agreement with all of the changes he has suggested.