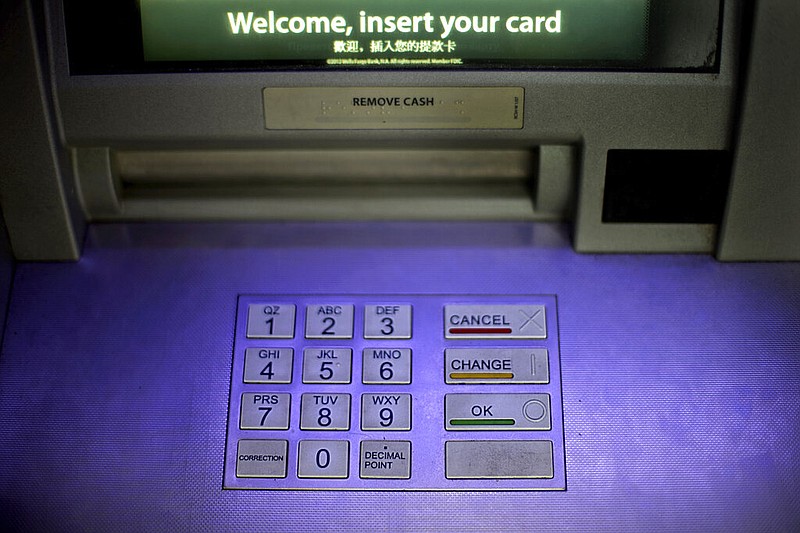 The keypad of an ATM, or automated teller machine, is shown in this July 16, 2013, file photo. (AP/David Goldman)

A federal judge sentenced a Texas man to 36 months in prison Wednesday in Little Rock for his part in a pair of ATM thefts in Central Arkansas.

Miller was arrested in January 2020 along with three others -- Antonio Denard Few, Christopher Landelle Burns and Steven Jadon Williams -- after a grand jury indicted him on charges that he and the others drove to Arkansas to steal money from ATMs.

When speaking to the court about his family, James Miller became emotional, taking a pause before saying he was sorry to his family for "not being able to be there to comfort you, protect you and provide [for] you."

On Jan. 17, 2019, Miller and his three co-defendants broke into a Walmart Neighborhood Market in Conway, used pry bars to break into an ATM and took $7,520, according to Assistant U.S. Attorney Bart Dickinson.

On the same day, the four also broke into a Shell Super Store in Benton, removed the ATM from inside, broke into the store's safe, and made off with more than $4,000 from the ATM and $1,500 from the safe, Dickinson said.

Miller, along with the co-defendants, also conspired to transport the stolen money across state lines, according to the indictment.

The defendants had also targeted Walmart Neighborhood Markets in Conway and three cities in Oklahoma from December 2018 to January 2019, according to the indictment.

Dickinson showed videos sent to James Miller and photos sent to and from Miller, showing banks the defendants planned to hit and tens of thousands of dollars in cash that was possibly stolen.

Permenter also told the court that Miller's phone pinged a signal near cellphone towers close to some reported thefts that Miller has not been indicted in.

Miller's attorney, Lea Ellen Fowler, challenged Permenter on a number of issues, including the signals his cellphones sent to nearby towers, asking Permenter "You don't really have any hard evidence that Mr. Miller was involved in any of these correct? Thus you have not yet indicted him on this, fair to say?"

Fowler asked Permenter whether some of the recovered items actually came from a co-defendant's home, and Permenter said "some, but some were also taken from Mr. Miller's residence."

While sentencing guidelines laid out a term of between eight and 14 months in prison, the judge went above the guidelines, saying he was not bound by them.

Fowler told the judge that Miller had been in custody for 16 months, mostly during the covid-19 pandemic, unable to see relatives or even meet with his legal counsel face to face.

Just before sentencing, the judge said he rarely departed from the sentencing guidelines, but he felt that the circumstances of the crime warranted more time than was stipulated in the guidelines.

The judge noted that Miller had two previous convictions and that Miller's crime deserved a stronger sentence than was in the guidelines.

"In no world can you come and pull an ATM out of the ground and go rob another one and conspire to rob others and have your getaway like it's Bonnie and Clyde that you're trying to get back to Texas, and it only be a sentence of eight to 14 months," Brian Miller said. "In no world does that make sense."

The judge dismissed Dickinson's request to consider other reported crimes that Miller may have committed in Texas, saying he had to focus on the crimes Miller pleaded guilty to in court.

Miller could still face federal charges for theft in Texas, the judge said.