'The Conjuring: The Devil Made Me Do It'

Bad plumbing or demonic possession? Young David Glatzel (Julian Hilliard) is in the grip of something in “The Conjuring: The Devil Made Me Do It.”

The case files of real-life paranormalists Ed and Lorraine Warren, who investigated various occult goings-on from the early '50s through the '80s, have proved to be reliable source material for the venerable "Conjuring" ghost-story franchise, now including three primary films, and three additional "Annabelle" spin-offs over the course of eight years. On the whole, the series has its moments (James Wan directed the first two with a bit of visual verve), but easily the most unnerving moments in the series come during the closing credit sequences, where the filmmakers include audio recordings and photos of the real case the particular film was based upon.

It's a strangely disconcerting effect: We've watched the Hollywood version of Ed, played by Patrick Wilson, and Lorraine, played by Vera Farmiga, and the kinds of spooky high jinks common to the genre, with demons doing their performative best to torture their victims with squeaks, rustles, and a succession of creepy fingers receding into the shadows. We see the narrative arcs build in terribly familiar ways, and resolve in the usual fashion, only for the films to end on the creepiest possible of notes, reminding us while the film may be pure Hollywood, there were once real figures who suffered from what at least they believed to be demonic forces tearing their lives apart.

This case from 1981 involved the Warrens enduring yet another of their most harrowing tales. It begins with another exorcism, this time of a young boy, David (Julian Hilliard), who began experiencing possession-like symptoms soon after he moved into a new (super-creepy) house with his family. With the child writhing on the table, under the ministrations of a priest (Steve Coulter), Arne (Ruairi O'Connor) -- the near-fiancee of David's sister, Debbie (Sarah Catherine Hook) -- grabs the struggling child off of Ed, who's just suffered a heart attack, and implores whatever's inside of him to take him instead. This is obviously a bad move.

Soon, Arne is granted his wish, and, after stabbing his and Debbie's landlord to death, believing him to be some sort of marauding demon, is soon tried for murder. Debbie and the family implore the Warrens to intercede with his attorney, and the official plea is entered as not guilty by reason of demonic possession. It's up to the Warrens, utilizing Lorraine's clairvoyance, to track down the source of the trouble, even as Ed is still rehabilitating from his heart attack, and Arne is held in a prison asylum, trying to fend off the evil voices still swirling around him.

Their search eventually leads to a retired priest (John Noble), who recognizes the satanic talisman the Warrens found at the original house, and may be able to offer more clues as to the culprit. Before things are said and done, Ed and Lorraine find themselves taken to the limit and beyond in trying to get to the bottom of the case.

If it sounds somewhat "Scooby Doo" like, minus the inevitable hoax revelation, that is more or less the set repetition of these films (including a somewhat ridiculous sequence in which a heavyset, animated corpse lunges at Ed in the exact manner of one of Scoob's and Shaggy's frequent antagonists -- a trope I have indeed pointed out before with this series), which has settled into a docile pattern.

Still, if many of the terror-based thrills are largely absent by this point, there remain other appreciable elements: As the films have progressed, the subtle thread working as a balance to all the demons and animated corpses, is the Warrens' exceptional romance, presented sweetly in their unceasing devotion -- Lorraine sleeping in a chair next to Ed in the hospital; Ed pushing his fragile cardiovascular system to punishing levels to protect her -- more or less powers the emotional quotient of the series.

If the films do nothing else, the connection they maintain to the reality of the Warrens -- turns out, they really were staunchly caring and protective of each other -- be it charming, or, in the case of the end-credit recordings, deeply disturbing, still has significant potency. It remains a sweet irony, then, that a franchise purportedly built around demonic possessions and the continued ministrations of evil forces is, at its heart, a middle-aged love story. 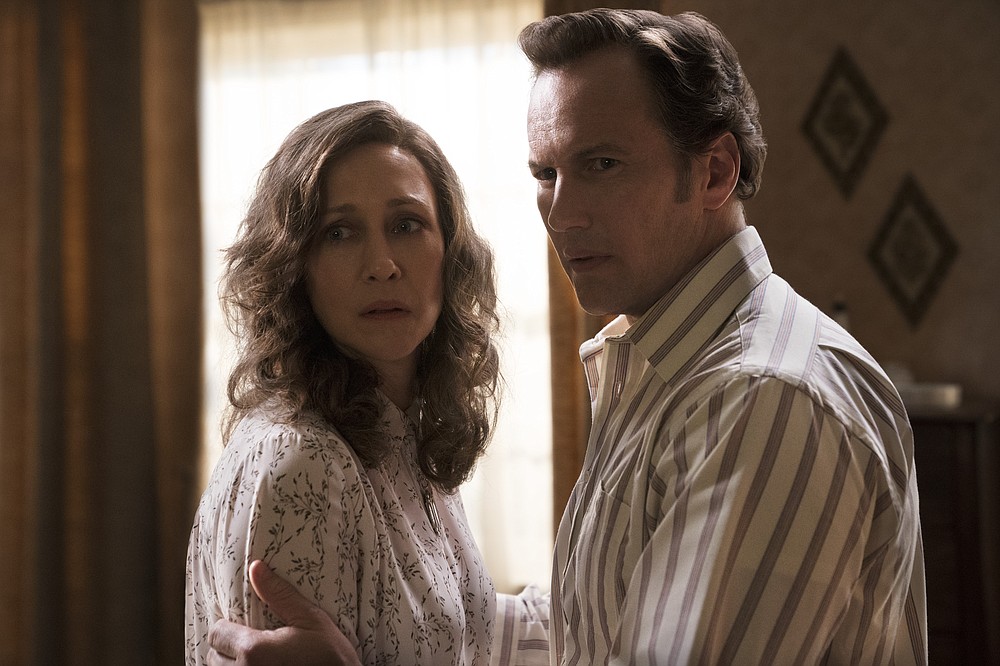 ‘The Conjuring: The Devil Made Me Do It’

Rating: R, for for “terror, violence and some disturbing images”