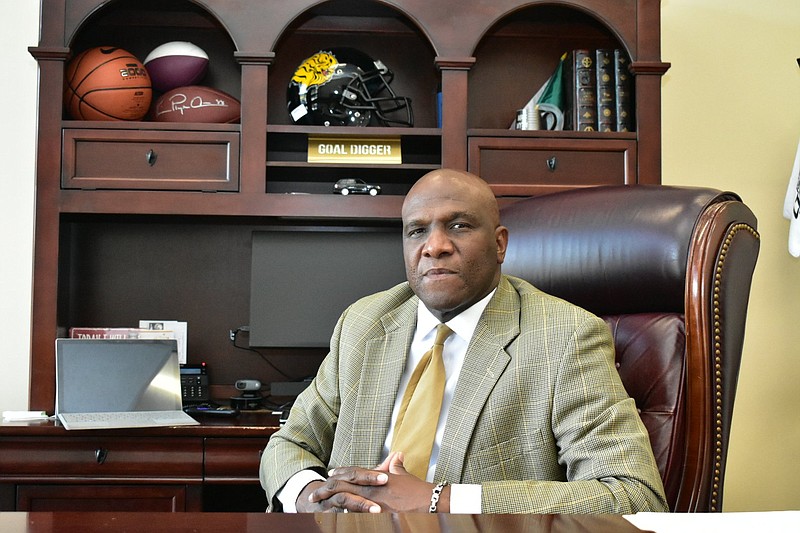 Chris Robinson is shown in his office at the University of Arkansas at Pine Bluff in this March 2021 file photo. (Pine Bluff Commercial/I.C. Murrell)

Chris Robinson has been named athletic director on a permanent basis at the University of Arkansas at Pine Bluff.

Along with that came a number of adjectives he used to describe his feelings.

“Surreal, excited, ready to go, chomping at the bit, nervous, all of that,” Robinson said. “Ready to get it started.”

Other quick thoughts came to Robinson, like “timeline” and “everything forming overnight – but we know that doesn’t happen.”

Asked to elaborate on the thought of a timeline, Robinson said: “I want to make things happen to give the kids the best possible experience and be ready for kids coming in, as well as faculty and staff and the administration.”

The university announced the move late Friday afternoon. Robinson had served in the role on an interim basis since Feb. 15, when Chris Peterson announced his retirement after just more than a year on the job.

“Since moving to the Athletics Department at UAPB, AD Robinson has had success working to improve all facets of the operation for the benefit of our student-athletes,” Alexander said. “In addition to earning the very strong endorsement of the AD Search Committee, he also enjoys the widespread enthusiastic support of the staff, the alumni and key stakeholders.”

Robinson, who turns 50 on Sept. 13, guided UAPB athletics through a successful yet busy spring in which the football and women’s volleyball teams, which typically play in the fall, reached the Southwestern Athletic Conference championship games. UAPB also won five SWAC individual championships in men’s and women’s track and field last month, with three individuals qualifying for the NCAA West First Round Championships.

Robinson also helped UAPB launch a campaign to raise money for a new soccer and track-and-field complex. He said on May 25 nearly half of the $500,000 goal for the opening phase was raised, and that once the goal is met, the complex can be completed within 90 days.

Next on his list will be the hire of a men’s basketball head coach. The Golden Lions have gone without a coach since April 7, when George Ivory announced his resignation.

Robinson declined to project a date for the announcement of Ivory’s successor, but said it was coming “real soon.”

A Mobile, Ala., native, Robinson first came to UAPB as a quarterback under Archie Cooley, but transferred to Southern University following the 1990 season. He rejoined the Golden Lions in 1993 when the program was restarted from a National Association of Intercollegiate Athletics death penalty and led the team to the 1994 national championship game after throwing for six touchdowns and rushing for another in double overtime against the school now known as the University of Montana Western.

He holds a bachelor’s degree in management from UAPB and master’s in business administration from MidAmerica. He is a 2014 inductee into the UAPB Sports Hall of Fame.

“Thanks to the chancellor and search committee, community, alumni, student body, and faculty and staff,” Robinson said. “I’m excited and going to be here to make it the best possible experience for the university as a whole.”

This story has been updated. It was originally published at 6:33 p.m.