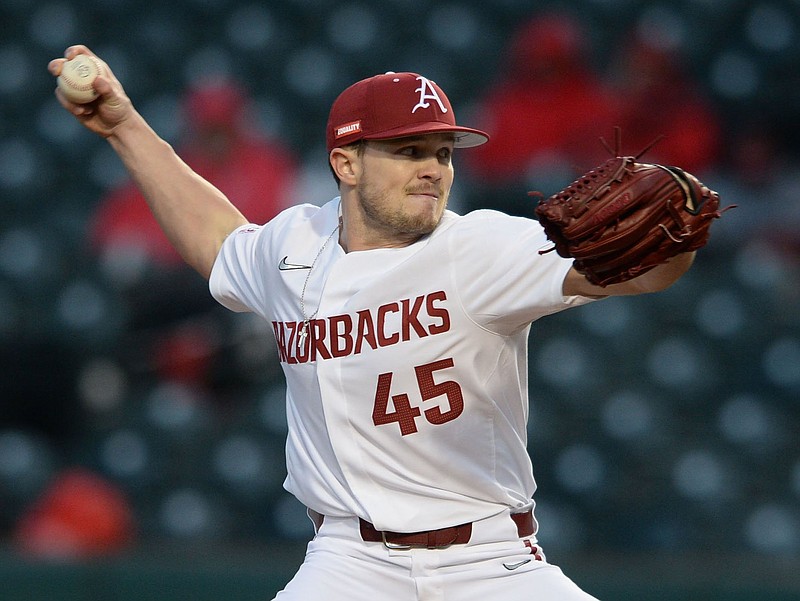 Arkansas senior reliever Kevin Kopps was named the national player of the year Thursday by Collegiate Baseball Newspaper after earning 10 victories and 10 saves with an NCAA-best 0.81 ERA. (NWA Democrat-Gazette/Andy Shupe)

Kopps has allowed six runs in 28 appearances, and during one stretch recorded 28 consecutive scoreless innings. Teams are batting .161 against him. He ranks third nationally with a 0.78 WHIP and seventh with 14.3 strikeouts per nine innings.

Arkansas Coach Dave Van Horn was not surprised by Kopps' national player of the year selection.

"And you know, I just think, talking with Luke Pavlovich Jr. at Collegiate Baseball, he just felt like it was a no-brainer, and he said it wasn't even that difficult a decision. Just really happy for Kevin and the team."

Kopps was voted SEC pitcher of the year by league coaches and in May became the first player to earn consecutive national pitcher of the month awards from the National Collegiate Baseball Writers Association. Kopps is also on the watch list for the NCBWA's Stopper of the Year Award that goes to the nation's best relief pitcher.

Collegiate Baseball, which was founded in 1957 and is the nation's oldest baseball publication, is the first to announce its player of the year award. The Dick Howser Trophy will be presented later this month at the College World Series, and the Golden Spikes Award winner will be announced in July.

A native of Sugar Land, Texas, Kopps is the second Arkansas player to be named national player of the year by Collegiate Baseball. Outfielder Andrew Benintendi earned the honor in 2015 when he also won the Golden Spikes Award and Howser Trophy.

Kopps is one of 42 semifinalists for this year's Howser Trophy, along with Arkansas teammates Christian Franklin and Brady Slavens. The Golden Spikes Award will announce its semifinalists next week.

Tennessee Coach Tony Vitello, who helped recruit Kopps to Arkansas in 2014, alluded to Kopps as the Golden Spikes winner following the Razorbacks' 7-2 victory over the Volunteers in the SEC Tournament Championship Game on Sunday. His Arkansas coaches and teammates have also spoken in favor of him winning the award.

"He's the most valuable player on the No. 1 team in the country," Arkansas pitching coach Matt Hobbs said Wednesday. "I guess that makes you a guy you consider for that award. I'm always going to be biased toward him for every award that's available.

"I think he has as good a case as anybody. Take him off our team and where are we at? I don't even like to think about that."

When asked about Kopps' candidacy for national player of the year awards earlier this week, Arkansas coach Dave Van Horn said the number of wins Kopps factored into made him "hugely important" to the success of the Razorbacks (46-10) this year.

"If you take those factors into consideration, I think Kevin has as good a chance as anybody," Van Horn said.