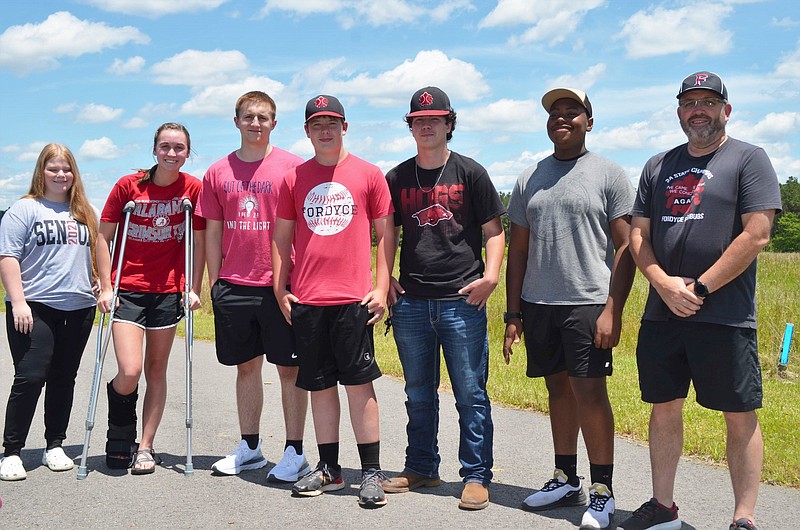 More than 50 people of all ages gathered at 2 pm. Thursday on a wide-open stretch of runway at the Fordyce Municipal Airport. They turned out to witness a rare sight in these parts, a rocket flight.

The windsock indicated a steady breeze out of the northwest, which, upon launch, would naturally carry the missile in that direction.

With a raw egg mounted in the nose cone as the payload, Redbug One stood ready on its stand while both the press and public waited in anticipation. With the airport located adjacent to U.S. 79, additional spectators pulled over on the roadside to take in the spectacle from their vehicles.

At the appointed hour, the countdown ticked off the seconds, but wait, "Houston, we have a problem." Upon pressing the ignition button, nothing happened.

The occasion was in preparation for the June 13 national rocket competition sponsored by Lockheed Martin to be held at Rockdale, Texas.

The group of high school students who built the vehicle are the Fordyce Rocket Team. Their STEM (science, technology, engineering and math) class is part of an initiative begun five years ago to inspire a new generation of youth to pursue careers in science.

Out of 615 rocket teams from 45 states, the District of Columbia and Virgin Islands, Fordyce made the cut of 100 teams to travel to Texas for the national finals.

Coach Jerome Wilson lives at White Hall and has taught at Fordyce for the past five years. He's an Air Force veteran as well as chemistry and physics instructor. He explained how he and his students became only the second Arkansas class to make the national finals since the American Rocketry Challenge began in 2002.

"I was born in '69 during the early moon landings and have always had my eyes to the sky," Wilson said. "I talk to the kids in class about how so often technology starts out as science fiction only to become science fact."

To qualify for the national competition, the team has to build two rockets with a maximum weight of 650 grams -- just shy of a pound and a half.

"The raw egg carried in the vehicle must be between 55 to 61 grams and cannot crack in flight. One rocket has an altitude goal of 825 feet with a total flight time from leaving the launch stand to touching back down of 41 to 44 seconds. The windows for success with the second rocket are an altitude of 775 feet with a 39- to 42-second recovery time. An ideal score is 0 for both flights totaled together with points being added for going outside those strict parameters. Judges add one point per foot over or under the set altitude and four points for any additional time over or under the recovery window," Wilson said.

Telemetry in the vehicle records where the rocket hit on those scales.

"Students have to use equations to calculate all the variables that can affect staying within the acceptable windows, factoring in elevation, wind, humidity and temperature to determine air density," Wilson said. "From that information they choose what size rocket motor to outfit the aircraft with. When you think about what they're trying to do, you'll see it's pretty tough. We've got some pretty smart kids, smarter in fact than they even realize. They have sat down and done the work every day even since school has been out. They're fully invested and have taken complete ownership of this program. It's fun for them and for teachers alike to see students get this excited about learning."

Wilson said the team scored a six and a three for a total of nine for both launches.

"I knew that put us in good shape because the previous year's winner took it with a score very near ours," he said. "They announced on the Friday of high school graduation that we had made the nationals."

Not everything, however, goes as planned.

"I tell them anything can happen on the launchpad," Wilson said. "When things go wrong that's when you start to see their critical thinking kick in as they work through a problem to resolution."

That's exactly what happened on the tarmac Thursday afternoon when the engine didn't fire as planned.

"They immediately started going down the list checking off different things that could be wrong," Wilson said.

After determining that the issue arose from the detonation module, Wilson pulled his truck around and used jumper cables from his pickup to fire the rocket. At 2:35 p.m. the crowd cheered as Redbug One raced skyward trailing white smoke. The test fire fell well within parameters for success, putting smiles on the faces of everyone present while wishing "God speed" to the young scholars.

"While we are in South Texas for the competition, I plan to share some culture with them by taking the team to an air and space museum, visiting the University of Texas campus and take in the Alamo," Wilson said. 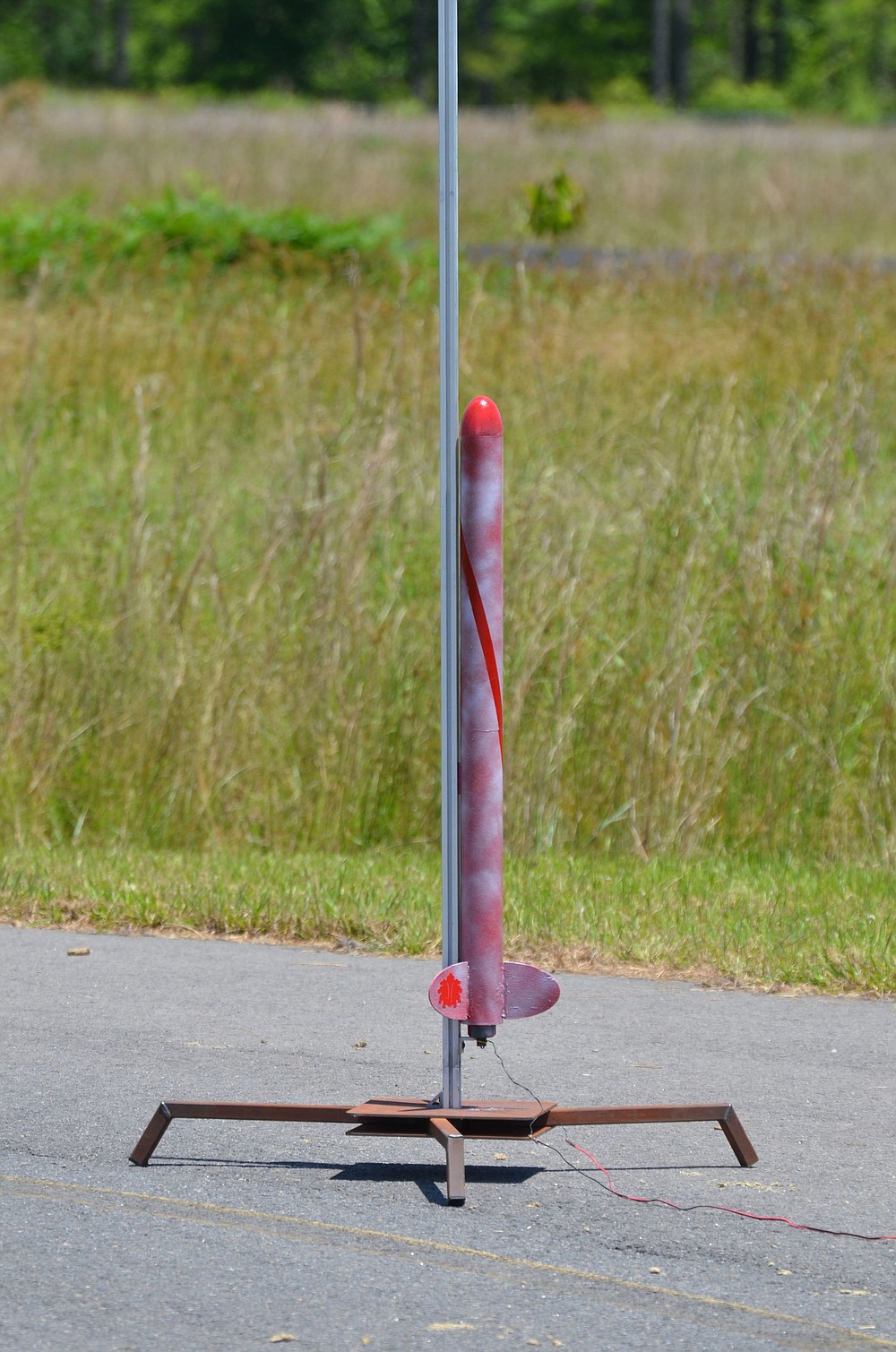 Redbug One stands ready for launch June 3 on the Fordyce Municipal Airport runway. (Special to The Commercial/Richard Ledbetter) 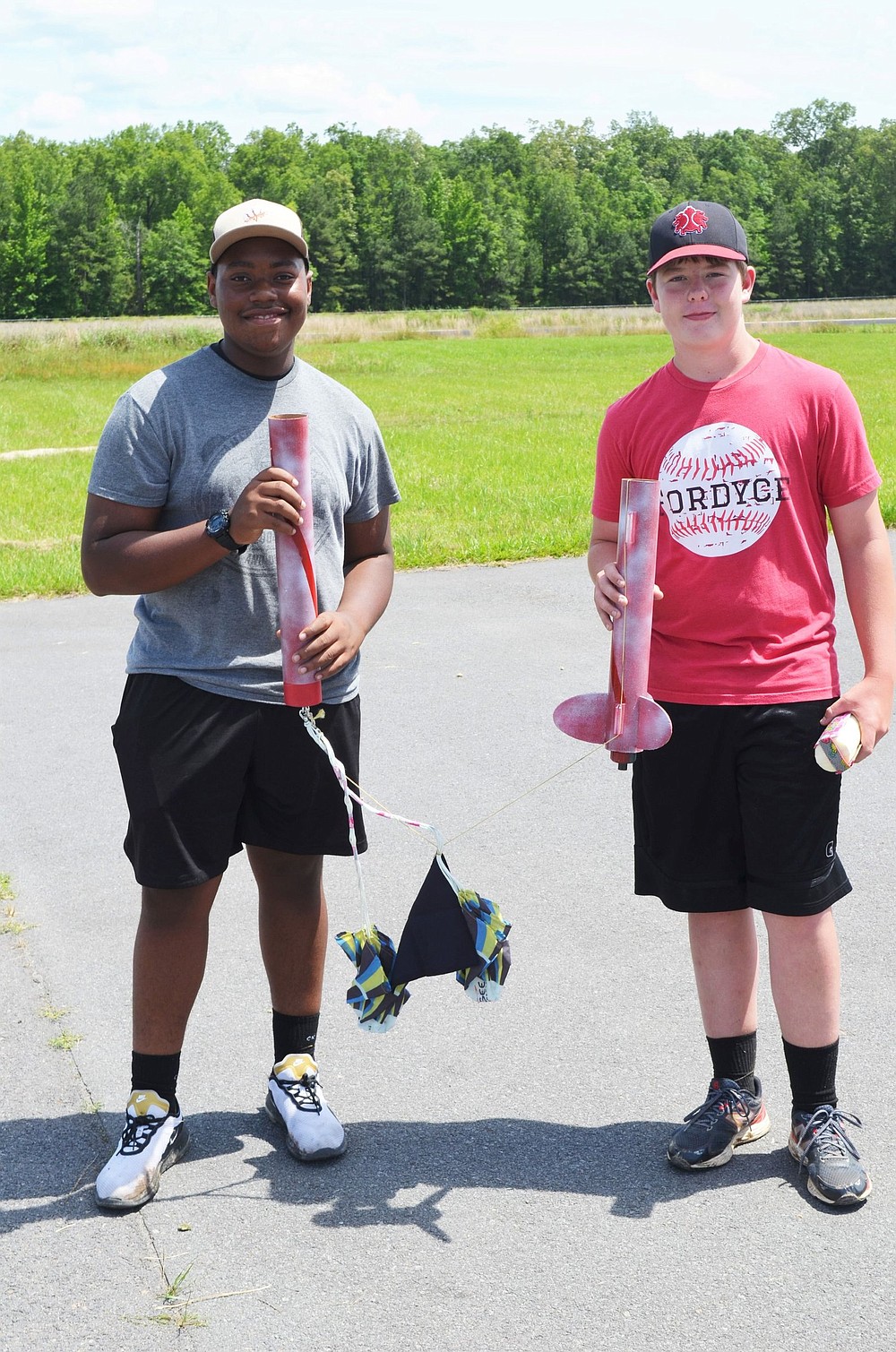 Jykidrun Oakley (left) and Jack Bryant hold up Redbug One after a successful flight and recovery. (Special to The Commercial/Richard Ledbetter)
ADVERTISEMENT